Magic Leap has revealed that its next-gen AR glasses — the enterprise-focused Magic Leap 2 — will be released in September and cost even more than the company’s hugely disappointing first headset.

If this device can meet expectations, it could help bring AR into the mainstream and breathe new life into a company that was in total upheaval just a few years ago.

The background: In 2015, Magic Leap was a Google-backed startup with a $3.7 billion valuation and a lot of public buzz, which originally rested on some incredibly impressive demo videos of its AR glasses — that were later revealed to be concept graphics, not actual demos.

It wasn’t until 2018 that the company finally soft-launched its first product: the Magic Leap One Creators Edition. The $2,295 device was a massive failure, with just 6,000 units sold — well short of the one million devices that founder Rony Abovitz predicted.

“Everyone was so bought in — they’d drunk the Kool-Aid together,” an early Magic Leap investor told Bloomberg in 2020. “Nobody stopped to say, ‘This product sucks,’ The first time I put on the real one, it was just like, ‘Oh shit. You guys did not deliver on your promise.’”

In 2020, Abovitz resigned as CEO, and the company laid off half of its staff, with anonymous insiders saying the moves were part of a plan to pivot toward the enterprise market — big companies with deep pockets, not average consumers.

In 2021, Magic Leap announced that it had raised another $500 million and planned to release its enterprise-focused AR headset, Magic Leap 2, the following year.

What’s new? Magic Leap has now announced that its new AR glasses will become commercially available on September 30, with customers having three versions of the tech to choose from:

The AR glasses themselves weigh 260 grams (about as much as two bananas) but connect to a little box (a “computing puck”) that contains the battery and processing components — that puck can be worn on the hip or carried in a pocket.

Looking ahead: Magic Leap is focused on selling its new AR glasses to businesses in three specific industries — healthcare, the defense and public sector, and manufacturing and industrial settings. It sees three main applications within those industries.

“Those use cases are training — any kind of training is made better and typically less costly in a digital environment — and any sort of 3D visualization, whether it’s anatomical hearts and brains or it’s a piece of machinery,” new CEO Peggy Johnson told CNET.

“The last one is the area we call remote assist, where you can call in an expert who’s not co-located but who can see what you see,” she continued. “[T]he frontline worker standing in front of a machine in a factory that’s gone offline … could quickly call in an expert from anywhere who can walk them through a fix.”

Any one of the three targeted industries could be enough to sustain an AR business, according to Johnson, so now all we can do is wait until September to see how many businesses are willing to take a chance on Magic Leap despite its checkered past.

Wearables
You no longer need a prescription to buy hearing aids in the US
The FDA is making over-the-counter hearing aids available to Americans, potentially making the devices cheaper and more accessible. 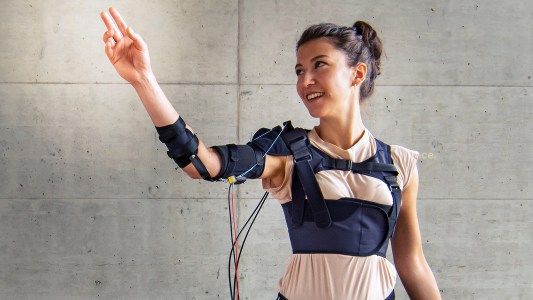 The Myoshirt acts like “wearable muscles,” using sensors and AI to help people with upper-limb impairments move their arms.