There’s a global transformation happening – millions of people are migrating to cities from the countryside. Today, more than half of the world lives in urban areas and that number is expected to reach almost 70% by the year 2050.

This trend has presented some challenges. As urban populations surge, rent prices rise; and as availability of affordable housing drops, human density, particularly in affordable areas, grows. These issues can be particularly acute in developing nations where people in search of a better life are flooding into cities that are not adequately prepared for them. The result is often the growth of informal, often quasi-legal or illegal “slum cities” that build up around a more developed urban core. In fact, the UN estimates that nearly 1 billion people now live in slums.

When most people think of a so-called slum city the image they conjure up isn’t positive. And for good reason. Residents of these informal cities face enormous challenges, including crime, poverty, and sanitation, just to name a few. But what people often miss is that these places are rarely static. As they grow, many become more stable and offer more opportunity.

“We do not always distinguish between the conditions of people’s lives and the response to those conditions.”

As sociologist Jeremy Seabrook explains, “Slums can be places of cruelty and violence, but equally of solidarity, tenderness and hope; we do not always distinguish between the conditions of people’s lives and the response to those conditions.” At the end of the day, there is one thing that these communities all share: they are filled with people trying to build a better life for themselves. And in many important ways, it’s working.

Here are five fascinating examples of this global transformation:

The Rooftop Communities of Hong Kong

In one of the most expensive cities on the planet, the poorest residents of Hong Kong have gotten creative. Faced with a dearth of affordable housing, people began to erect crude shelters on the roofs of buildings. Now there’s an intricate network on residences at the very tip of the city’s sparkling skyline.
CNN explains:

Constructed on top of buildings since the 1950s and 60s without government approval, these makeshift communities clutter the rooftops in old working-class neighborhoods such as Kowloon.Corrugated metal sheets roughly cover concrete-walled shacks. And they’ve provided vital accommodations for low-income people such as migrants from mainland China and Southeast Asia for more than half a century.

The “Venice of Africa”

Originally a small fishing village outside of Lagos, Nigeria, Makoko has ballooned into a sprawling network of makeshift houses, small boats, and canals. Ironically referred to as the Venice of Nigeria, Makoko grew as poorer city residents and migrating rural populations settled in the slum’s makeshift canal houses. In recent year’s the Nigerian government turned its attention to the residences, saying they were “a blight” on the booming city’s reputation. Uncoincidentally, Makoko sits near the most traveled bridge in Lagos.

The Guardian illustrates the situation:

Makoko is also the perfect nightmare for the state government – a slum in full view, spread out beneath the most travelled bridge in west Africa’s largest city. Everyone who flies into Lagos to do business on the Islands is likely to find themselves passing over the Third Mainland Bridge. For a city keen to re-create itself as forward-looking, Makoko is a dismal advertisement, and the government knows this.

Close-up, though, it throbs with the kind of energy that marks Lagos out and has made it a darling of urban theorists. Makoko shares with Lagos the exceptional situational inventiveness that makes the entire city tick.

The Hillside Favelas of Rio

Rocinha is one of hundreds of favelas that crawl up the hillsides on the outskirts of Rio de Janeiro. In the early 1900’s, Rocinha was a small, crude settlement of wood shacks with dirt floors. Now, it resembles a “normal” neighborhood in many ways, with permanent housing, electricity, internet, and thousands of businesses.

According to official government census numbers, Rocinha is home to 70,000 people, but many unofficial estimates put its population at upwards of 300,000 people. Rocinha’s growth has been fueled by the ingenuity and entrepreneurial drive of its residents who have created over 500 intricate alleyways to get around through the favela, build their own houses, pull electricity into their houses, and have started 6,000 businesses in the favela alone. After years of continuous growth, life in Rocinha today defies many of the expectations one might have about living in a favela.

(E)ven among favelas there can be big social contrasts. Favelas with a privileged location like Rocinha have relatively better standards than other shanty towns further away from jobs and services; and even within Rocinha there are richer and much poorer communities. The poorer areas are usually higher on the hilltop, with many houses only accessible on foot. Recent reports suggest 65% of favela residents are a part of Brazil’s new middle classes. And despite these people’s relatively low incomes, many of these communities are a long way from being “slums” as they are often portrayed.

The Unexpected Economic Powerhouse of Mumbai

Mumbai’s Dharavi is one of the world’s largest slums with upwards of a million residents. Many outsiders look at pictures of Dharavi and assume the worst. But look closer and you’ll find that Dharavi has a surprisingly robust informal economy, making the picture much more complex.  Only about two-thirds the size of Manhattan’s Central Park, its economic output is estimated to be between $650 million and $1 billion.

The New York Times gives an example of how this relatively small area churns out so much:

At the edge of India’s greatest slum, Shaikh Mobin’s decrepit shanty is cleaved like a wedding cake, four layers high and sliced down the middle. The missing half has been demolished. What remains appears ready for demolition, too, with temporary walls and a rickety corrugated roof.

Yet inside, carpenters are assembling furniture on the ground floor. One floor up, men are busily cutting and stitching blue jeans. Upstairs from them, workers are crouched over sewing machines, making blouses. And at the top, still more workers are fashioning men’s suits and wedding apparel. One crumbling shanty. Four businesses.

The “Garbage City” of Cairo

In Cairo, one of the world’s most populous cities, space is at a premium. This problem comes into particular focus when you consider where the trash produced by Cairo’s 20 million residents goes. One neighborhood called Manshiyat Nasser is intimately familiar with that problem. Popularly known as “Garbage City,” the residents of Manshiyat Nasser live their lives quite literally on top of piles of garbage. On the surface, this seems like it could present devastating conditions that would surely break the human spirit. Yet, the people of “Garbage City” have been incredibly resourceful.

These piles of garbage are the result of the Cairo Metropolitan Area having never established an efficient garbage collecting system, despite having a population of nearly 20 million.

The inhabitants of Manshiyat Nasser, mostly Coptic Christians, have filled this gap for the past 70 years. These informal garbage collectors, called the Zabbaleen or “Garbage people,“ collect the garbage of Cairo’s residents in a door-to-door service for a small fee and then transport it via donkey carts or pick-up trucks to their homes in Manshiyat Nasser. Once home, they sort the garbage for recyclable material. The collecting of the trash is traditionally the men’s work, while women and children sort the garbage.

Although antiquated on its face, the efficiency of the recycling system of the Zabbaleen is remarkable. Almost 90 percent of the garbage is recycled, which is four times the percentage most Western recycling companies produce. 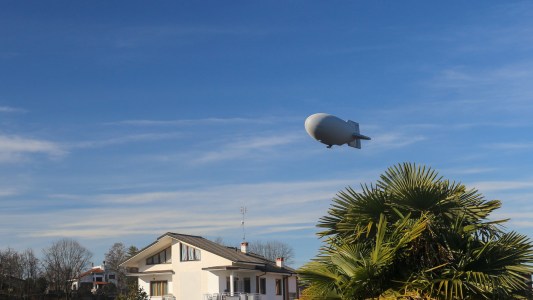 Global Development
Airships could boost internet coverage and help close the digital divide in Africa – and beyond. Here’s how
By Johnny Wood
Subscribe to Freethink for more great stories
Subscription Center
Sections
Video
Freethink
Subscribe
We focus on solutions: the smartest people, the biggest ideas, and the most ground breaking technology shaping our future.
Subscribe