Bringing renewable power and clean water to impossible places is what Emiliano Cecchini loves to do.

After 15 years of experience in the renewables industry, Cecchini is turning his attention to developing countries where resources are scarce. His goal: to help people meet their basic needs of power and water.

In 2014, Cecchini and his collaborator, Davide Bonsignore, were working on clean energy projects in South Africa, equipping kindergartens with solar panels and clean water. But in South Africa’s Eastern Cape — the most violent and impoverished place that Cecchini had ever been — the process was arduous and installation took weeks.

Eventually, Cecchini and Bonsignore hit on a solution: a “microgrid,” packaged in a shipping container, with all of the equipment preinstalled. When it came time to equip the final school, it only took an afternoon — and OffGridBox was born.

The box itself is a pre-fabbed 6x6ft shipping container, simple to use, but complex by design. With a buffet of plug-and-play water and electrical options — like solar panels, desalination systems, or batteries — it can provide affordable energy and clean drinking water to a small community. But Cecchini says it isn’t for everybody.

“Everyone wants to go off-grid. We filter out customers who want to outfit their cabin in the mountains. We want to go for the more impactful projects,” he says.

In July 2019, OffGridBox made an impact on the Ikungi District, in Tanzania, when it arrived in three villages, in partnership with the UN Development Program. For many villagers, the risk of diarrhea, dysentery, and cholera from drinking unsafe water is high, and access to clean water could mean greater health security.

The company donates the box itself to the community and provides maintenance for the life of the box. Patrons drop by with empty jerry cans or power banks (provided by OffGridBox) for a refill or recharge for 18 cents. They can get up to 20 liters per day, and enough energy to power their lights and charge their cell phones. In return, OffGridBox takes 20%. To manage the systems, they hire a member of the local community, selecting women for this role with the goal of empowering female entrepreneurs.

“We try to focus on the toughest regions of the world, the areas most in need,” Cecchini says.

And the OffGridBox cofounders have seen them all. Bonsignore has been to post-typhoon Madagascar, a Somalian psychiatric institute, converted seawater to drinking water in the Philippines, and responded to the hurricane disaster in Puerto Rico. Cecchini has been to South Africa and Italy. And together they recently went to rural Rwanda to install an OffGridBox for drinking water, power, and Wi-Fi for the local school.

But despite being “in the mud and in the malaria,” Cecchini says the most considerable challenge has been bureaucratic. Local regulations, piles of paperwork, and unrealistic requirements stand as roadblocks that prolong the process. One location tried to require that he provide a lab and staff to test the water. Another required that the box manager had a flush toilet. In an area with no running water or plumbing, Cecchini says, this was next to impossible.

Even with all the challenges, OffGridBox remains true to its mission: to bring power and water to remote areas. While they target projects that have a humanitarian or ecological benefit, they’ve also branched out into animal conservation projects.

Joe Pifer has years of experience filming wild animals, like bathing bears and foraging orca whales, and, as manager of field operations for Explore, he broadcasts the footage online for anyone to see. But when a group of conservationists asked Explore to record the daily activities of gorillas in the Democratic Republic of the Congo, Pifer was stumped.

“It is in the middle of nowhere, as far off the grid as you can get,” Pifer says, explaining that he wouldn’t be able to place hidden cameras like he typically does. “There are no power stations or power lines. It is far up in the mountains.”

Instead, he brought his own microgrid to the mountains. OffGridBox created a customized shipping container, equipped with 24 solar panels, a satellite, an integrated server rack, and a backup battery bank for cloudy days. They shipped it to Gisenyi, Rwanda, and drove it in the back of a pickup truck to the Congo, where it became the ideal powerhouse for Pifer’s cameras, helping Explore capture and broadcast the private life of a gorilla family.

With climate change causing more frequent and severe extreme weather events, Cecchini feels the pressure. He hopes OffGridBox will become a go-to means for bringing water and electricity to communities impacted by a disaster and the low-impact box becomes a real solution for rural communities. 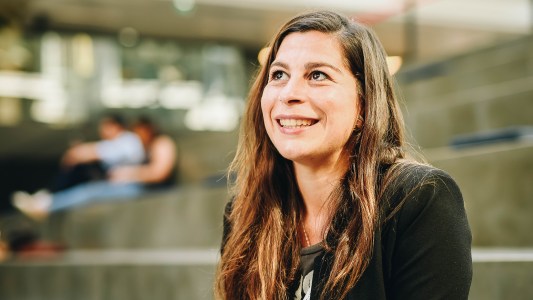 Aline Sara is changing the conversation around what it means to be a refugee by talking — literally. Through her…

Startups
Conversations with refugees
By Teresa Carey
Subscribe to Freethink for more great stories
Subscription Center
Sections
Video
Freethink
Subscribe
We focus on solutions: the smartest people, the biggest ideas, and the most ground breaking technology shaping our future.
Subscribe