Exposure to nature is good for your health — it can lower stress levels, improve mood, and even reduce disease risk. However, more than half the world’s population now lives in cities, where green spaces are less common.

So a new generation of designers and architects is getting creative, transforming abandoned or unwanted city structures into urban parks.

From Shanghai to Manhattan, the approach is not only overcoming the issue of carving out room for green spaces, but also helping cities cut construction costs and build sustainably.

Here are two of their most stunning creations, plus a first-of-its-kind urban park that could be just on the horizon.

In 2011, Shanghai’s Longhua Airport closed — and nine years later, an urban park emerged from its ashes.

Design firm Sasaki created the 36-acre Xuhui Runway Park on the site of one of Longhua’s defunct runways, giving locals access to a sunken garden, a birdwatching grove, and more than 2,000 trees.

By building many of the park’s paths and other structures from runway concrete still in place from the airport, Sasaki was able to save on construction costs, as well as limit the greenhouse gas emissions that result from manufacturing concrete from scratch.

The rising popularity of online shopping has forced many brick-and-mortar retailers out of business, leaving cities with the concrete corpses of once-bustling malls.

Now, Tainan, Taiwan, has transformed one of those abandoned shopping centers into Tainan Spring, an urban park centered around a recreational lagoon.

Dutch architecture firm MVRDV designed the park, which opened in 2020. The former China-Town mall’s underground parking level serves as the basis for its urban pool, which is surrounded by plants.

The firm incorporated parts of the mall’s infrastructure into their design, and any parts that were removed were carefully recycled, “making the project an innovative example of the circular economy,” according to MVRDV.

New York is the most densely populated city in the U.S., but below its surface is a football field-sized space that’s been empty since 1948 — and one group is trying to turn it into a massive urban park.

The project is called the Lowline, and the idea is to transform the abandoned Williamsburg Bridge Trolley Terminal into a green space using technology that would pipe sunlight underground.

A 1,000-square-foot prototype version of the park, the Lowline Lab, opened in 2015 to prove the technology could work, but the large-scale project was put on hold in 2020 due to a lack of funding.

If the Lowline group can overcome financing issues and prove that a large underground urban park is viable, other cities could start looking to abandoned subterranean structures as potential green spaces. 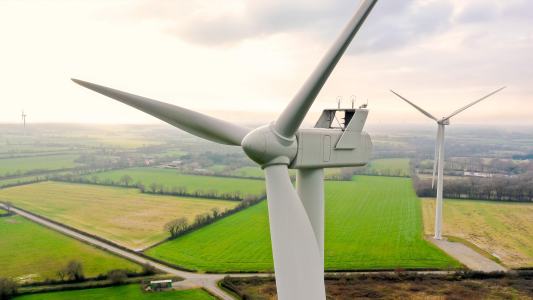 Using decommissioned wind turbine blades to build bridges, buildings, and more could eliminate one of the biggest disadvantages of wind energy.