One thousand feet below the surface of the ocean, Steve Haddock peered through a submarine porthole, watching organisms drift by. A small worm, only about an inch long, with a translucent body came into view. At first, Haddock thought nothing of it. He had seen arrow worms before.

But this time was different. When the arrow worm darted away, it left a glittery blue cloud of bioluminescent sparks — a deep sea firework.

Haddock, a graduate student starting his two-decade career studying bioluminescence — became obsessed with the worm. At that time, No one thought arrow worms could emanate light. He sorted through everything the research team collected in the trawls, trying to find another one of the elusive orange worms.

“It’s exciting to be able to see an organism glow for the first time that no one has ever seen before, or that no one even knew was bioluminescent,” he says.

When he finally found an arrow worm and brought it to the lab, he discovered that, like the jellyfish, it uses chemistry to produce its blue smokescreen.

But he couldn’t replicate the vision he saw in the deep sea. Studying deep sea bioluminescent creatures in a laboratory doesn’t compare.

Glowing Mysteries in the Deep Sea

About three-quarters of marine life produces light. Haddock estimates that bioluminescent light can be seen from a hundred meters away, making it a powerful form of communication in the deep sea’s dark, high-pressure environment.

“If you think about using sound or chemical cues or any other kind of sense in the water, it’s either going to be too slow or too confined to actually have an impact, but this allows a tiny organism to communicate to something much larger than it,” he says.

Researchers have learned that organisms can use bioluminescence for many reasons: luring prey, finding mates, or intimidating and scaring enemies. But a lot remains a mystery.

To see bioluminescence in action, scientists often rely on capturing deep sea creatures and filming them in a dark laboratory. Despite trying to mimic their natural environment in the lab, removing the creatures from the ocean stresses them out, and, well, they lose their sparkle. Some don’t even survive. Researchers call this the “tank effect.”

In what Haddock calls a “duct tape job,” MBARI’s team affixed a camera to their ROV and sent it to depths it wasn’t designed to withstand. They attached a long fiber optic cable to control the settings and focus — with 4,000 meters of water column between the ROV pilot and the camera.

“It’s amazing that the things that are driven by the consumer market — (the cameras) obviously weren’t intended for bioluminescence or astronomy. It just made for better cinema,” he says. “The technology is being driven by other factors. For us to be able to apply it to deep sea biology has been a real breakthrough.”

Advances in cameras and low light sensors are taking cinema (and smartphones) up a notch. But they also enable researchers to observe deep sea animals with new digital eyes, gaining further insight into mysterious deep sea lives and behaviors.

Before the recent advances in ultra-sensitive sensors, researchers relied on shining spotlights on organisms in the dark ocean. But the artificial light startled the creatures, interrupting their natural behaviors or scaring them away. And cameras with lower resolution produced grainy images without detail.

“They are documenting and reporting on large gaps in our knowledge about what animals in the deep sea have the ability to bioluminesce and how this behavior is displayed, which facilitates our understanding of its ecological roles,” DeLeo says.

Take the crinoid, a type of sea lillie related to the starfish — they practically dissolve when researchers bring them to the surface. But when Haddock and his team filmed one at about 3,000 meters deep, they saw it release a cloud of bioluminescent particles — a display that no one had seen before.

For Haddock, who once snapped grainy, grey pictures of these same creatures,  seeing them in full color and detail has been like having new eyes. The videos reveal behaviors of organisms that researchers have never reported before — a seafloor animal undulating with light, a jellyfish releasing a vortex of color.

A few years ago, when the MBARI team first put the lowlight 4k camera on an ROV, Haddock had another glimpse of his obsession — the tiny arrow worm and its brilliant light show that he saw from the submarine two decades before.

Their modern ROV is about the size of a large sport utility vehicle, so in the unstable water and pitch-black darkness, it took a steady hand for the ROV pilot to position the vehicle and focus the camera on the tiny worm. Haddock finally got to see the arrow worm’s light show once again.

“We actually got these amazing displays where the worm would flip away and leave this trail of vortex rings of light behind it. We were able to film what I had seen 20 years ago out the back of the sub,” he says. 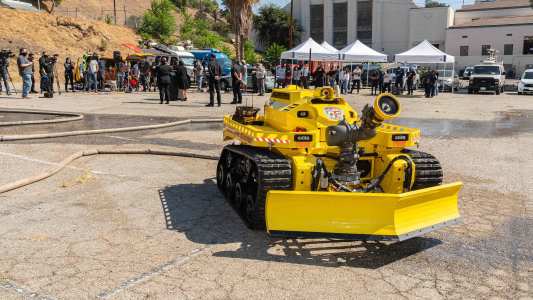