Denmark, the nation that built the world’s first offshore wind farm, has agreed to an ambitious plan for another global first – an energy island in the North Sea which could eventually be capable of supplying energy to a history-making 10 million homes. The move will create a critical boost to the world’s offshore wind capacity.

The first “hub and spoke” energy scheme will involve building an island 80 kilometres off the Danish coastline to act as the transmission centre for hundreds of wind turbines surrounding it. At $34 billion, it’s the largest construction project in Danish history.

The project is also a potential blueprint for other coastal nations to develop their own green energy sources. “It’s in Danish waters, yes, but it could conceptually be in any other country,” said Peter Larsen of the North Sea Wind Power Hub Programme.

Energy hub for the world

The initial phase for the artificial island is around the size of 18 soccer pitches. Initially, the North Sea hub will be capable of producing 3 gigawatts of electricity, but the plan is to scale up to 10 gigawatts, which is nearly one-and-a-half times Denmark’s current needs.

As well as supplying other European countries with electricity, the goal is to use the new offshore island to produce green hydrogen from seawater, which can also be exported. Large batteries on the island will store surplus electricity for use when demand is high.

Although the Danish government will own a majority stake, private companies will be invited to join a public/private partnership to build the project. Power will be supplied by as many as 600 giant wind turbines, each standing up to 260 metres tall.

Such efforts are key given new climate-first commitments from countries around the world. As Reuters has reported, the European Union intends to depend entirely on renewable energy by 2031, increasing its energy capacity 25-fold by 2050.

Offshore wind installations saw a slight dip in the mid-2000s, but have been growing ever since. In fact, 2020 saw record-breaking financial investments into offshore wind, according to new data from The Renewables Consulting Group

Scaling up while holding hands

The scaling up of offshore wind should be the catalyst for other ocean-based economic activities worldwide, according to Thomas Thune Andersen, Chairman of Danish green energy company Ørsted, which built the Vindeby wind farm.

“Setting up wind farms does have an impact on the local environment,” he told the World Economic Forum’s 2021 Davos Agenda virtual event. “But it’s also an opportunity to do other things,” he said.

There is a need “to set ambitions high” when it comes to offshore renewable energy, Andersen said, and to enable other activities in the same area, such as mariculture.

Governments, NGOs and businesses “all need to hold hands in order to do this,” he said. “We have seen very good examples already of seaweed farming, talking to fishermen about how we optimize that, how we build reefs and how we create other kinds of nurseries for fish.”

Andersen is one of more than 65 global leaders from business, civil society, international organizations, science and technology who comprise the Friends of Ocean Action, an initiative convened by the Forum to fast-track solutions to the most pressing challenges facing our oceans. 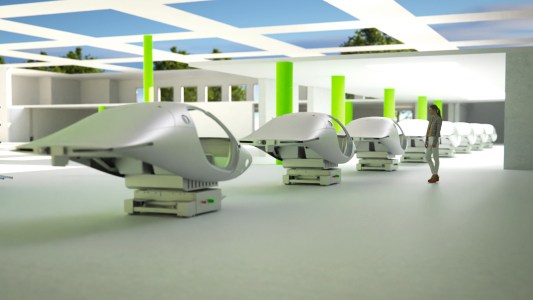 Solar car startup Aptera has purchased a factory where its vehicles will be carried from station to station by autonomous robots.