Geothermal energy may finally be on the cusp of its big breakthrough. The often-overlooked energy option has seen a big uptick in demand, investments, and new technologies this past year.

As concerns about climate change grow, we’re looking for ways to decarbonize, and renewable energy sources — such as wind and solar — are all the rage. In fact, in 2019 the U.S. energy consumption from renewables exceeded that of coal for the first time since 1885.

Geothermal could make clean energy accessible to everyone.

There’s just one teeny-tiny problem with solar and wind: they only work when the sun is out or the wind is blowing. So, if you’re completely reliant on solar to generate electricity for your house, you’re going to be stumbling around in the dark at night.

That’s why we need other energy sources that can pinch-hit for solar and wind.

Battery storage is one proposed solution. Another solution could be geothermal power and — if it can be proven to work reliably — it could be a cheap, reliable, renewable energy source that could make clean energy accessible to everyone.

4,000 miles below you — the very center of the Earth — is an incredibly hot place…hotter than the surface of the sun. That heat drifts upward so that even the Earth’s crust is hot — as Vox reports, just a few miles below the ground you’re standing on, there’s enough energy to “power all of human civilization for generations to come.”

Geothermal energy, as the name suggests, is all about harnessing that power. The concept is nothing new; we’ve actually been using some geothermal energy for centuries, tapping into geysers and hot springs for bathing, cooking, etc.

But to make electricity, you’ve got to go deeper.

Just digging a few miles below the surface can provide enough energy to generate electricity. In fact, the first commercial geothermal plant opened in 1960 in California, and there are 64 in operation today. These plants are located in areas with hot pressurized water — like a hot spring. Then, wells are drilled. As the hot water rises through the well, the heat is extracted…and voila, you’ve got sustainable electricity. The cooled water is then returned to the ground to be reheated.

That’s all great — the problem is, doing it this way is pretty location-dependent. It works best in places like California or Iceland, where there’s a lot of moving tectonic plates or volcanic activity to create these reservoirs.

But what about the rest of us?

Deeper Into the Furnace

Conventional geothermal depends on natural reservoirs because that’s the easiest. But Earth’s energy is everywhere, including in the dry deserts. The next-level form of geothermal energy (called enhanced geothermal systems, or EGS) is all about drilling into dry rock and creating man-made reservoirs by injecting pressurized water into the well, which fractures the rocks around it. The water passes through the hot, fractured rock and is collected and drawn up through another well on the side of the fractured area.

In theory, these artificial underground furnaces could be made anywhere in the world.

While EGS plants do exist (the first experiment dates back to 1974), due to the enormous expense and rudimentary techniques, they haven’t shown a lot of promise — until recently. Thanks to better technology and an increase in funding, several successful EGS reservoirs can now generate electricity at “close to commercial prices,” according to Quartz.

But as we drill deeper into dryer land, the engineering obstacles get bigger.

In order to transition from the conventional location-dependent geothermal to EGS, a little support from the public is needed. That can be tricky because technically EGS is “fracking” — shooting liquid into the ground in order to fracture a rock. And fracking has some baggage when it comes to public opinion — in fact, in some areas it’s completely banned.

But as David Roberts at Vox points out, EGS fracking is safer than gas fracking — the fluids used here have no risk of contaminating the water.

Still, it remains a dicey political issue. But without public support, experts fear that geothermal energy will remain an overlooked energy source, limited to states with natural reservoirs and no fracking bans.

If the technology continues to advance and the public support is won, geothermal energy could be a game-changer — we could technically harness this energy anywhere. The DOE estimates that geothermal could provide around 5,157 gigawatts of electricity — about five times the electricity generation capacity in the US, enough to sustain us for years.

Or, if geothermal was used for direct heat, the DOE writes that it would be “theoretically sufficient to heat every US home and commercial building for at least 8,500 years.” 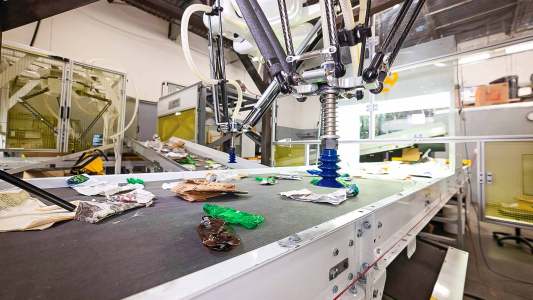 AMP Robotics has developed a recycling robot that uses AI to sort recyclables twice as quickly as humans can.