On cloudy days, and at night, solar panels stop generating power. On calm days, wind turbines stop spinning. But, in the push toward a clean energy transition, people are increasingly reliant on renewable power — so when the sun goes down on a hot day in California, for instance, an energy shortage looms.

Meanwhile, when the wind blows hard or the sun beats down elsewhere, excess wind and solar power is often wasted because of the lack of grid capacity to carry it where it’s needed. So, Europe is taking a different approach and creating a supergrid across regions, countries, and oceans to smooth out the fluctuations in energy suppliers — and hopefully build more resilient power systems.

Europe is creating a supergrid across regions, countries, and oceans to smooth out the fluctuations in energy suppliers — and hopefully build more resilient power systems.

What is a supergrid? A supergrid is a transmission network that spans a large area. It is usually transcontinental or multinational in scope.

The idea is that supergrids could bring wind energy to areas that don’t have consistent wind or solar energy to generally cloudy regions, or balance out energy production across different places.

Plans are in the works to run a 2,361-mile-long subsea cable from Morocco to the English village of Alverdiscott, near the coast.

While renewables are touted as a critical step toward cleaner energy, supergrids are also viewed as a vital technology that would enable them to scale up. By evening out local variations in wind and solar energy, supergrids might help enable a worldwide energy transition.

What’s happening in Europe: Every day, the sun beats down on the hot, arid country of Morocco, and the trade winds relentlessly blow. Now, a British company wants to tap into those resources by constructing a solar and wind farm to capture the abundant energy and deliver it to the notoriously rainy U.K.

Plans are in the works to run a 2,361-mile-long subsea cable from Morocco to the English village of Alverdiscott, near the coast.

According to the plan, Morocco would generate energy from solar panels and wind turbines. Then the energy would flow underwater through four cables, bypassing Spain, Portugal, and France along the way. The project would supply 8% of the U.K.’s electricity, enough to power seven million households.

“By sharing the sun’s energy, we can help to build a more peaceful and prosperous world.”

“You can generate three times more energy per square metre in Morocco than you could ever do in the UK,” Sir Dave Lewis, chair of the XLinks project, told itv News.

In Morocco, converter stations will convert high-voltage alternating current (HVAC) electricity to high-voltage direct current (HVDC) power. Then the power will be delivered via the four subsea cables to a plant in North Devon, to be converted back to high voltage electricity and fed into the British transmission system, reports Good News Network.

A global network: For the past decade, Morocco has been a leader in renewable energy technology. It is home to Noor, the world’s largest solar power facility, and already two-fifths of its electricity capacity lies in renewable sources. However, only two million individuals in a country of 35 million people benefit from it at the moment.

Nonetheless, the government’s plan continues to include exporting its energy overseas. It has two electrical cables currently linking the country to Spain, and this new subsea cable will connect to the United Kingdom, reports Toward Net-Zero.

In 2013, Germany announced the  construction of a supergrid that would bring wind from the north to industry in southern regions. A few years prior, the country wasted  127 gigawatt-hours of wind energy, enough to power almost 30,000 homes for a year, because of a lack of grid capacity, reports Grist.

The new supergrid has been delayed for eight years, however, by local opposition to overhead power lines. Fortunately, a compromise was reached in 2021 to bury the wires, in what will be the world’s longest underground transmission line when completed.

Earlier this month, The International Solar Alliance and the United Kingdom announced they are launching a worldwide supergrid initiative to connect 140 nations to renewable energy, reports PV Magazine.

“By sharing the sun’s energy, we can help to build a more peaceful and prosperous world,” the Green Grids Initiative plan stated. 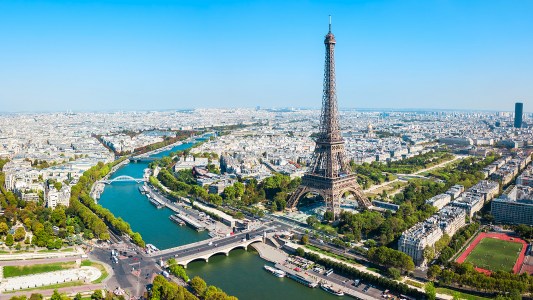 Paris’ plan to make its iconic Seine River swimmable for the 2024 Summer Olympics could help other cities clean up their own waterways.

Urban Living
Paris to make the Seine River swimmable for the Olympics
Subscribe to Freethink for more great stories
Subscription Center
Sections
Video
Freethink
Subscribe
We focus on solutions: the smartest people, the biggest ideas, and the most ground breaking technology shaping our future.
Subscribe