A natural gas power plant has come online that expects to capture 100% of its own carbon dioxide output. And unlike conventional “clean” fossil fuel plants, it won’t need an extra, energy-hungry facility tacked on to do it.

Instead, the carbon-capture system is built right into the design of this Texas plant, which the power company says will actually make the plant more efficient than conventional gas plants.

If they can scale up the system and make it competitive, it would totally alter the landscape for clean energy, taking some of the burden for combating global warming off expensive or inconsistent renewable energy sources, like wind and solar.

Thanks in part to the fracking boom, natural gas prices are near historic lows in the United States, and this has led to a surge in gas power production. In 2016, gas surpassed coal for the first time as the largest source of electricity in the United States.

This has meant a big decrease in CO2 emissions from electricity, because natural gas burns way cleaner than coal. Depending on the type of fuel and plant, gas might emit half as much carbon dioxide per megawatt as coal (not to mention other air pollutants).

Fossil fuels still provide about two-thirds of the electricity in the United States, and, despite a huge push for renewables and the rise of natural gas, electricity is still the biggest source of greenhouse emissions in the US.

But that could radically change if this new power plant design works as well as advertised.

A standard power plant burns a mix of natural gas and air to heat up water, which creates steam, which spins the turbines that make electricity.

The CO2 released from the burn just goes into the air (along with nasty pollutants like NOx), unless you filter it through an expensive carbon “sequestration” system — which itself takes a ton of energy to run.

Up to 20% of the power produced by a typical plant has to go to running a carbon-capture facility, and you’ll still end up releasing some CO2 anyway.

CO2: The Cause of (and Solution to) All of Life’s Problems

This new plant, built by Net Power, works on a wholly different design, which uses carbon dioxide itself to run the plant, rather than as a byproduct.

Instead of air, it mixes the natural gas with pure oxygen, to create something called “oxyfuel.” This is super potent and highly efficient, but it’s also explosive, so they dilute it with CO2, into a mixture that’s about 5% oxyfuel, 95% CO2.

That mixture is then burned to heat up a stream of pure, pressured CO2, which spins the turbine and makes the power. Pretty neat!

But the best part of the design is what happens to the leftovers. The byproduct of the combustion is essentially just more CO2 and water.

They use a heat exchanger to condense the water out, and what they’re left with is a stream of hot, nearly pure CO2. The heat exchanger can recapture some of that remaining heat to make the plant even more efficient, and what’s left is about 90% pure carbon dioxide.

This can be “sequestered” underground, or it can be sold for other uses. For instance, oil companies can buy it to pump into wells, which both buries the carbon back deep in the ground and increases the output of the well. Win-win-win.

And, in the end, essentially no CO2 from the burn gets released into the air.

The Achievement (and the Challenge)

The engineers at Net Power told Vox they think this first plant will be about 59% efficient, which is pretty close to the 62% efficiency of the latest generation of conventional gas power plants — but, crucially, they have zero emissions.

Bolting on a capture-facility reduces the overall efficiency of traditional plants to below 50%, and they still release some pollution.

The system is online, but they’re still running tests, not generating electricity for the grid yet. The trickiest part will be getting the oxyfuel, the mixture of oxygen and natural gas, to burn efficiently and evenly in a 95% CO2 environment. They’re still struggling with that, but they expect to fine tune the chemical mixture as the testing goes on.

But the true test will be the bottom line of the plant as a whole: whether it can be as profitable as other plants, and whether it can do it without subsidies. Net Power says it’s not opposed to taking tax credits for clean energy, but it’s not going to count on them.

And, as for what the science is saying about how they’re doing so far, the facility’s lead designer said, “We’re still smiling.” 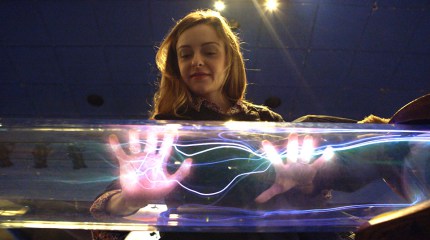 Transatomic believes they’ve figured out a safe, scalable, cost-effective way to power the world with nuclear.

Series | Challengers
Powering the world with nuclear5:48
Subscribe to Freethink for more great stories
Subscription Center
Sections
Video
Freethink
Subscribe
We focus on solutions: the smartest people, the biggest ideas, and the most ground breaking technology shaping our future.
Subscribe