NASA spends billions of dollars on rovers to explore space — and if one of them got a flat tire, the whole mission could come to a permanent standstill.

So NASA has made tire development a major priority — and now, a startup is bringing this space-age tire tech to consumers, with airless bike tires that never go flat.

Most bicycle tires are made from air-filled rubber, and while that works for gripping the road and absorbing bumps, it’s also prone to punctures.

There are airless bike tires that won’t go flat, but many of those look like swiss cheese, with large holes that can let in debris that must later be removed. Others are made of foam, which doesn’t provide as much grip.

But the SMART Tire Company’s airless tires are made out of metal — using a NASA-developed alloy containing nickel and titanium, called NiTinol.

The idea of riding on metal tires sounds painful, but this alloy has special properties that promise a smooth ride without the possibility of getting a flat.

The key was getting the metal to respond to bumps the same way rubber does: by changing its shape to absorb them, and then bouncing right back into its original form.

That’s not metal’s forte — a soda can stays dented if you squeeze it — but NiTinol is what NASA calls a “shape memory” alloy.

By arranging its molecules in a certain way, NASA gave the alloy the ability to repeatedly regain its original shape after being deformed, much like rubber.

SMART encased the NiTinol base of its airless bike tires in a rubber-like material called polyurethanium, which improves the tires’ grip and keeps debris from entering their hollow interior.

When the tread wears out, it can be replaced without having to replace the entire tire.

The tires (appropriately named “METL”) are heavier than air-filled rubber ones, so they aren’t ideal for speed cyclists or anyone looking to minimize their bike’s weight.

While SMART hasn’t announced a price for its airless bike tires, it has said the cost will be “comparable to a high performance or racing tire.”

It has also revealed that people will have three color options — gold, silver and metallic blue — and that the tires will go on sale in 2022.

When they do, the tires could find a niche with cycling enthusiasts who are willing to pay a premium for the peace of mind that comes with a tire that’s never going to go flat — and the cool factor that comes with riding on something designed for other planets. 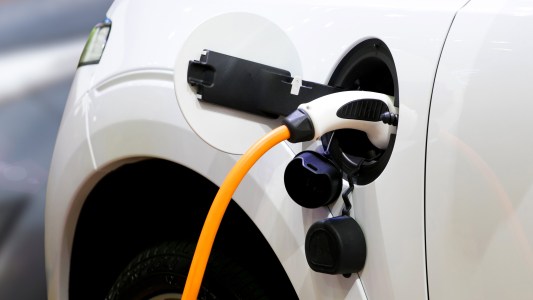 Transportation
A battery revolution could make electric cars a reality for everyone
Subscribe to Freethink for more great stories
Subscription Center
Sections
Video
Freethink
Subscribe
We focus on solutions: the smartest people, the biggest ideas, and the most ground breaking technology shaping our future.
Subscribe