The electric Mini Cooper that rolled around Munich’s auto show this past September on airless tires may have big implications for you — in the next few years, the French manufacturer Michelin is hoping these tires will be on your car.

Michelin’s  airless tires have been in the works for over a decade. Their unusual design — they look a bit like toy car wheels — drew some stares at the autoshow, but overall passengers seemed pleased with the new technology.

“It was an exceptional experience for us, and our greatest satisfaction came at the end of the demonstration when our passengers, who were admittedly a little wary at first, said they felt no difference compared with conventional tires,” technical and scientific communications director Cyrille Roget said in a release

Why it matters: The company considers the tires — dubbed UPTIS, which stands for Unique Puncture Proof Tire System — an important step on the road to sustainability.  As the name suggests, the airless tires don’t puncture, so they should last longer — which means less tires will need to be produced, helping limit waste.

Michelin claims millions of tires end up in landfills early because of puncture damage. There, they are joined by legions of more tires that are simply too old and worn out. Disposed tires can become fire hazards, releasing gases, heavy metals, and oil into the environment. The US alone produced over 260 million scrapped tires in 2019.

Airless tires don’t puncture, so they should last longer — which means less tires will need to be produced, helping to limit waste.

The manufacturer claims that around 18% of tires scrapped per year are due to damage; that’s where they hope UPTIS comes in.

Furthering the green mission, the tires can also be made from recycled plastic waste. Right now, they only contain some recycled waste, but Michelin plans to eventually make them entirely from recycled material, according to Interesting Engineering.

Michelin believes the airless tires will lead to safer, worry-free driving, as road conditions will be less damaging to the tires. This has the knock on effect of lower costs for vehicle fleets, like buses or rental cars, as well. Goodyear announced this past July that the Jacksonville Transportation Authority will be piloting the company’s own version of an airless tire on the JTA’s fleet of autonomous vehicles.

How they’re made: Drivers at the autoshow reported not noticing a difference between the airless tires and conventional ones. But feeling aside, the airless tires are designed quite differently. (Air is, like, a big part of how your car tires work.)

UPTIS combines an aluminum wheel with a special “tire” around it. Made with a plastic matrix laced with — and reinforced by — glass fibers. This outer tire is designed to be flexible while strong enough to support the car.

And as New Atlas reports, the airless tires can also be adjusted to change their performance. Stiffness can be changed to impact how the car feels while braking, cornering, or accelerating, while holes punched in the tires can help reduce the likelihood of sliding dangerously in the rain.

UPTIS has been in development for roughly 21 years, Michelin senior principal product engineer Steve Cron told Roadshow; the breakthrough came when the materials the tires are made of were finally developed. The airless tires build off what the tire company has learned from its already-available airless Tweel system, which is meant for off-road vehicles.

No price point on UPTIS yet, but Michelin is aiming to get them on your car by 2024, most likely on GM vehicles, Roadshow reports. The companies have been using the Chevrolet Bolt as a test platform. 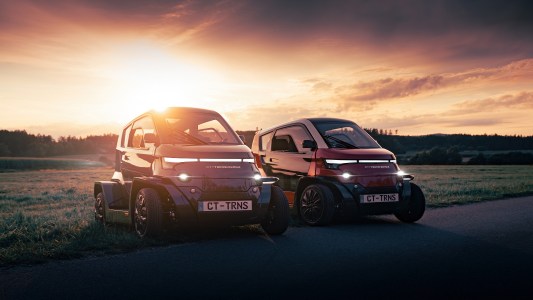