Startup Otto Aviation has completed the first phase of test flights on its Celera 500L, a highly efficient airplane that could dramatically cut the cost of air travel.

“The data from our first phase of test flights shows that we are on the path to achieving our goals for the aircraft,” CEO William Otto Jr. said in a press release.

Why it matters: After labor, the price of fuel is an airline’s top cost, according to the International Air Transport Association (IATA). Fuel costs directly affect how much you pay for your plane ticket.

The Celera 500L: One way to make an airplane more fuel efficient is to make it more aerodynamic, so air flows smoothly past it. That minimizes drag, which pushes against a plane as it flies through the air.

Changes as small as recessing the rivets on a plane’s body can noticeably reduce drag, but Otto Aviation went big with the Celera 500L, rethinking the plane’s design from the ground up.

This resulted in a plane with a teardrop body, a propeller in the rear, and long, thin wings. Designed for private use, the plane has room for six passengers, a projected top speed of 460 mph, and a range of 4,500 miles.

Acing the test: On November 17, Otto Aviation announced that it had finished phase 1 testing of a Celera 500L prototype, completing a total of 55 test flights for about 51 hours of flight time.

Those flights validated the startup’s performance goals for the plane, and it now plans to work on developing a production version of the aircraft, which it expects to sell for $5 million.

“We couldn’t be more excited in this step toward our mission of having a production aircraft in 2025,” Otto said, “and we look forward to beginning the next phase of development where we will take the aircraft to higher altitudes and higher speeds.”

Looking ahead: Otto Aviation might be one step closer to its goals, but it’s likely still years away from certification.

“It all sounds exceptionally promising, but perhaps too promising,” Richard Aboulafia, an aviation analyst at Teal Group, told CNN. “Given the combination of range, speed, capacity, and a very low powered engine given all of those metrics, I think they just need to demonstrate that it works.”

If the startup can prove itself with the Celera 500L, though, it could move forward with larger versions of the craft — it’s already developing models capable of seating up to 19 and 40 passengers.

​​Otto told CNN the company is in discussions with major airlines about those, so it’s possible the planes could one day take the place of the regional jets currently used for short-haul flights — and cut commercial ticket prices in the process.

“If they can actually achieve what they claim, then it should be scalable upward,” Aboulafia said. “But again, I think it’s best to take a cautious view, and wait to see whether it can be proven on their first aircraft.”

The big picture: Radical new plane designs like Otto Aviation’s aren’t the only way to reduce fuel emissions — we could also cut the costs of fuel by eliminating the need for it with electric planes.

There are also in-development biofuels made from food waste and algae, and even carbon-based jet fuel made from CO2 pulled out of the air, instead of fossil fuels pulled out of the ground. They could one day make the planes we have now more sustainable, and if researchers can get those to be cost-effective, they could also have an impact on ticket prices. 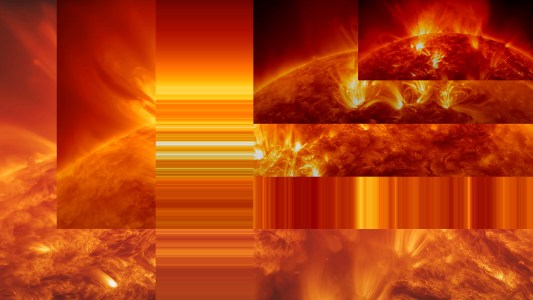 A stunning time lapse of the surface of the sun created using NASA images shows the activity that occurs over the course of just one month.

Astronomy
See the surface of the sun evolve in stunning time lapse
By Kristin Houser
Subscribe to Freethink for more great stories
Subscription Center
Sections
Video
Freethink
Subscribe
We focus on solutions: the smartest people, the biggest ideas, and the most ground breaking technology shaping our future.
Subscribe