Canadian aircraft manufacturer Bombardier has unveiled the Global 8000, a new plane with a maximum operating speed of 721 miles per hour — making it the fastest private jet in the world.

The challenge: From 1976 until 2003, the Concorde was the world’s fastest passenger jet, with a cruising speed of 1,354 mph. That’s more than double the speed of sound (767 mph, or Mach 1), and it meant passengers could get from New York City to London in under three hours.

Before Concorde even flew, however, the FAA prohibited supersonic planes from flying over land, due to concerns about the booms produced when they break the sound barrier, which limited supersonics to oceanic routes. Tickets were incredibly expensive due to the high cost of fuel, and the plane was unprofitable.

The Global 8000 is faster than any private or commercial jet since the Concorde.

Fastest private jet: Today, several companies are working to bring back supersonic flight, and Bombardier says a ​​proof-of-concept demonstrator for its newest offering, the Global 8000, exceeded the speed of sound during test flights in 2021.

It still isn’t legal to fly that fast over land, but the plane’s maximum allowable operating speed of Mach .94 is just shy of supersonic flight, so it’ll get people anywhere they want to go about as quickly as is legally possible — and faster than any other private or commercial jet since the Concorde.

The details: The Global 8000 can carry up to 19 passengers and boasts four individual suites. The cabin has a circadian lighting system to fight off jet lag and a filtration system that delivers the “fastest fresh air replacement,” according to Bombardier.

It has a range of 8,000 nautical miles, which means it could travel between Los Angeles and Sydney or New York and Hong Kong without stopping to refuel.

Development of the Global 8000 is ongoing, but Bombardier expects to have the plane ready to enter service in 2025, and the fastest private jet won’t be cheap — the list price is $78 million.

The big picture: The Global 8000 is a high-end private jet that will likely be used primarily by business execs and the very wealthy. The rest of us might be stuck at today’s commercial jet speeds for a little longer, but the next upgrade could have us moving even faster than Bombardier’s passengers.

United Airlines has already inked a deal with Denver-based startup Boom Supersonic to buy 15 of its in-development supersonic commercial jets. Those planes won’t be able to fly over land, either — at least until the FAA revises its regulations — but they’re expected to be 75% more efficient than the Concorde, so tickets should be more reasonable.

Atlanta-based startup Hermeus, meanwhile, is developing a hypersonic passenger plane capable of traveling at least 3,800 mph (Mach 5), without producing a sonic boom — if the FAA changes its speed limit into a noise limit (as NASA hopes it will), it could potentially fly over land.

Under the existing rules, the plane could still get you from New York to Paris in 90 minutes, compared to today’s 7.5 hours — and Hermeus says it expects tickets to cost about as much as today’s business class seats. 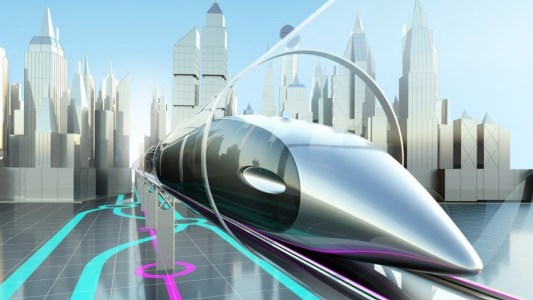 The Hyperloop is physically possible, but engineering challenges will make its construction difficult. Also, accidents would be catastrophic.

Engineering
Elon Musk’s Hyperloop is possible. How badly do we want it?
Subscribe to Freethink for more great stories
Subscription Center
Sections
Video
Freethink
Subscribe
We focus on solutions: the smartest people, the biggest ideas, and the most ground breaking technology shaping our future.
Subscribe