Nuclear energy is cleaner than fossil fuels, and a single plant can output a tremendous amount of power — two characteristics that could make it a game changer in the fight against climate change.

But building a new nuclear power plant requires a lot of time and money (upwards of $10 billion and 7 years), and nuclear accidents have soured many people on nuclear power. Additionally, while nuclear doesn’t create air pollution or carbon emissions, it does produce small quantities of radioactive waste that must be stored.

All that adds up to a nuclear power industry that’s on the decline in the U.S. — but small modular reactors could breathe new life into it.

One reactor typically produces about a gigawatt of power, and each of the U.S.’s 59 nuclear power plants houses one to three reactors.

As the name implies, small modular reactors are compact versions of traditional nuclear reactors that are designed to be built mostly off-site.

“The vision is that you’d be able to mass manufacture them the way Boeing makes airplanes, put them together as much as possible in a central location, and then ship them out worldwide,” nuclear engineer Leslie Dewan explained to Freethink in 2016.

At the time, she also noted that NuScale was making “really great strides on the small modular reactor front” — now, the company’s design just became the first to receive a safety certification from the U.S. Nuclear Regulatory Commission (NRC).

Each of NuScale’s small modular reactors is 76 feet tall, 15 feet wide, and capable of producing 50 megawatts of electricity. That’s just 5% as much power as traditional nuclear reactors, but the company anticipates a typical plant having about a dozen of them.

The design is simpler than that of a traditional reactor, with a passive safety system that the NRC determined would “ensure the nuclear power plant would shut down safely and remain safe under emergency conditions, if necessary.”

You’d be able to mass manufacture them the way Boeing makes airplanes.

A passive safety system means the reactors shut down if they aren’t continuously supplied with power. This is unlike the active system at Fukushima, which required power or backup generators to keep the reactors cool.

In theory, it should cost less to build NuScale’s small modular reactors on an assembly line, instead of creating unique systems for every plant. And because the design is simplified and standardized, new nuclear power plants should take less time to build and get approval — but it’s still not certain.

Still, now that NuScale’s small modular reactors have cleared the safety hurdle, the company can start looking ahead and working with customers willing to take a chance on this new approach to nuclear power. 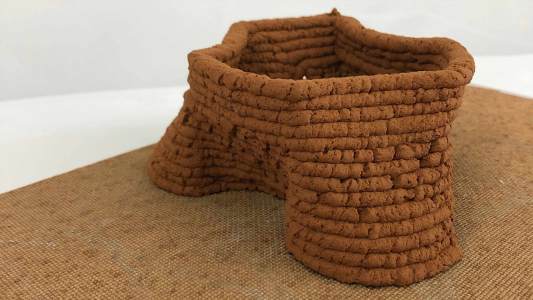 By transforming soil into a construction material for 3D printed homes and other structures, researchers hope to slash concrete’s environmental impact.

3D Printing
3D printed homes could soon be made out of dirt
Subscribe to Freethink for more great stories
Subscription Center
Sections
Video
Freethink
Subscribe
We focus on solutions: the smartest people, the biggest ideas, and the most ground breaking technology shaping our future.
Subscribe