NASA is working with aircraft manufacturer Lockheed Martin to bring back supersonic flight over land by developing a quieter supersonic airplane.

By redesigning the shape of the aircraft, they hope to reduce the sonic “boom” to just 60 decibels — about the level of casual conversation.

The challenge: Supersonic planes fly faster than the speed of sound (Mach 1) or over 767 miles per hour. The Concorde, the West’s only commercial supersonic jet, cruised at 1,350 mph — almost Mach 2.

At that pace, you could fly from New York to Los Angeles in two hours or less — in one of today’s commercial jets, the trip takes about six hours.

But even before the Concorde was retired in 2003, it wasn’t allowed to fly that coast-to-coast route because the FAA banned supersonic flight over land in 1973, due to fears about loud sonic booms.

“Its sonic-boom signature will be perceived as a sonic heartbeat sound rather than the typical loud double-bang.”

“We worked with NASA to develop the necessary design tools and experimental techniques to accurately shape the vehicle so that its sonic-boom signature will be perceived as a sonic heartbeat sound rather than the typical loud double-bang that today’s supersonic aircraft produce,” said Michael Buonanno, chief engineer for the project and a Lockheed Martin Fellow.

From speed limit to noise limit: NASA expects the X-59, which is currently being built at an Lockheed facility in California, to be ready for safety and performance flights in 2022.

The supersonic plane will then be flown over NASA’s Armstrong Flight Research Center in Edwards, California, in 2023 to demonstrate that it’s as quiet as expected and to validate the tools used to predict and measure the plane’s noise.

Between 2024 and 2026, NASA plans to fly the X-59 over several communities in the US and ask residents how they feel about the noise it produces during supersonic flight.

In 2027, NASA will present US and international regulators with that survey data. The hope is that it will convince them to base their rules for flight over land on the amount of noise an aircraft produces, rather than the fact that it travels above a certain speed.

The big picture: Even if NASA is able to get supersonic flight over land unbanned by regulators, the X-59 is still only a research aircraft that will never carry passengers.

However, the tech being developed as part of the project and the new regulations it could inspire may help other aircraft developers get their supersonic (or hypersonic) planes cleared to fly over US and international soil.

“The Quesst mission has the potential to transform air travel as we currently know it,” said Peter Coen, NASA’s mission integration manager for Quesst. “Success of this mission will open the door to fast air travel for everyone across the globe.” 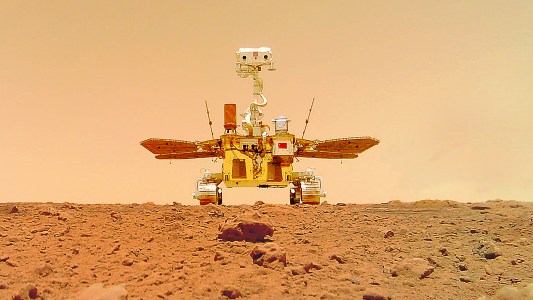 Data from China’s Zhurong rover suggests there was substantial liquid water on Mars far more recently than we thought.