Patricia McGuire, a 77-year-old Belleville, Ill., resident has been homebound for the last year due to the pandemic. She doesn’t drive, she doesn’t have a computer or internet access, and she relies on her neighbor for groceries.

When she became eligible to receive the Covid vaccine, McGuire faced a dilemma: she needed dependable transportation that limited contact with others. Due to her age, she’s at high risk of contracting the disease.

Taking a bus wasn’t an option; McGuire relies on a walker for stability, and it’s too far to walk to a bus stop. Ride-hailing services weren’t possible, either; McGuire doesn’t have a smartphone, and getting in and out of cars is difficult because of her walker.

Fortunately for McGuire, a new transit program, Flyer, launched in St. Clair County in late 2019, just months before the pandemic. Flyer is an on-demand public transit service that allows residents to receive door-to-door transportation on a short bus, a vehicle designed to make the ride easier for people with disabilities. Flyer rides typically cost $3, about the same as a bus fare, but right now Flyer is offering them free to anyone eligible for the Covid vaccine.

Thanks to Flyer, McGuire is now fully vaccinated from the coronavirus.

“The driver was out-of-her-way nice,” McGuire says of her Flyer ride. “She took me right to my door and made sure I got in safely. We said goodbye, and that was that.”

Flyer is one of many “micromobility” or “micro-transit” programs that have been implemented by small to mid-size cities across the country to provide communities with more transit options. And the programs are made possible by TransLoc, a division of Ford that uses the power of big data to revolutionize public transit.

Historically, public transit has been a slow-moving public service. Developing a public transit traditionally required studying, analyzing, and mapping routes all by hand. But TransLoc’s data software automates that process, saving municipalities days of work and millions of dollars.

“Planning a regional transit system used to take me three days of pulling data, importing it to Excel and running pivot tables,” says Tyler Means, senior business strategist at TransLoc. “Now, I can perform that same analysis to agencies in two to three hours of work.”

Many municipalities are wasting money on dedicated bus lines. A ride-hailing option could save them money and better serve their citizens.

Means discovered TransLoc while working as an operations manager at the Kansas City Area Transportation Authority (KCATA), where he helped the city modernize and rethink its public transit offerings. KCATA commissioned TransLoc in 2019 to help implement an on-demand ride program in a suburb about 10 miles southeast of downtown Kansas City. The program was a hit and KCATA quickly expanded the program. The on-demand program even replaced many fixed bus routes in the area — set routes that buses are mandated to take each day regardless of demand.

KCATA’s microtransit program confirmed a theory Means long had about transportation: on-demand transit services are actually more efficient than mass transit programs for many parts of the country. Many municipalities don’t have busy thoroughfares, and are wasting money on dedicated bus lines. A ride-hailing option could save them money and better serve their citizens.

“When I saw TransLoc and what they were able to do, I got caught up on their mission. I thought, There’s something here. We can rethink how we move people.”

TransLoc captures route information with a device that can be attached to any public transit vehicle, and that device keeps track of the vehicle’s location and how many riders get on and off at each stop. The data is then fed to TransLoc’s database, where it’s used to glean insights and help municipalities deploy their fleet more efficiently.

On the consumer end, TransLoc also powers a mobile app that residents can use to call an on-demand public transit vehicle. “It’s very Uber-like,” Means says.

TransLoc’s emphasis on efficiency has been especially important over the last year with cities cutting funding for public transit programs due to Covid. (City funding for transit is “almost completely reliant on sales tax,” according to Means, and sales tax plummeted during the pandemic because of the dip in consumer spending.) Many cities have found that on-demand transit allows them to cut costs without disrupting service.

An efficient bus route costs somewhere between $3 and $5 per rider. But oftentimes cities are paying closer to $15 or more per rider, at which point it makes sense to explore a micro-transit option.

Once St. Clair County began working with TransLoc it noticed low ridership in Fairmount City, which was likely costing them money. They replaced the fixed bus route that serviced the area with a 14-seat Flyer van. The result has been hundreds of thousands of dollars in savings and greater customer satisfaction, according to the county’s transportation managing director Ken Sharkey.

“With Flyer, we’re able to get off those arterial roads and deliver people directly to their destination,” he says. “If you miss your bus, you can be standing around for an hour. With Flyer, you can get a vehicle there much, much quicker.”

On-demand transit also addresses safety concerns about riding public transit in a pandemic. Transit ridership was down by as much as 85% nationwide at one point during the pandemic, and is still down by 60% from pre-Covid levels, Means says. Residents might not want to board a bus with 30 strangers, but riding in a minivan with one or two others is far less risky.

Napa Valley replaced its entire dedicated bus route system during Covid with an on-demand, micro-mobility program powered by TransLoc, for instance, and the program has been well-received by residents.

Smaller vehicles are easier to maintain, which provides even further savings. A typical city bus costs a local government somewhere between $60,000 and $80,000, whereas a minivan or sprinter is a tenth of that price after subsidies.

The pandemic underscores the importance of having multiple transit options, and that’s why TransLoc has made its software free to any municipality that wants to use on-demand public transit to help residents receive their Covid vaccines.

The pandemic has also exposed the public to the wonders of public micro-transit. McGuire says she plans to use Flyer often after she receives her second vaccine. “The Flyer driver and I were talking, and she said all I have to do is call the number and they’ll take me to the grocery store. It’s very nice they do that for senior citizens.” 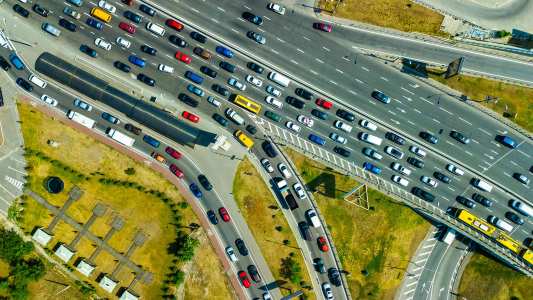 Transportation
Traffic: This 100-year failure is getting a solution
5:26
By Jack Berning
Subscribe to Freethink for more great stories
Subscription Center
Sections
Video
Freethink
Subscribe
We focus on solutions: the smartest people, the biggest ideas, and the most ground breaking technology shaping our future.
Subscribe