One day, brain-computer interfaces — devices that turn thoughts into commands for machines — may be as common as smartphones (or at least as common as prosthetic limbs).

We could use the systems to end paralysis and supercharge our intelligence — or maybe order something on DoorDash with a thought (not every application has to be dramatic).

Now, researchers have demonstrated a high-fidelity wireless brain-computer interface that could get us one step closer to that sci-fi future.

Brain-computer interfaces already exist — they’re helping people with paralysis control robots and even move their own limbs again — but even the most advanced systems have a major limitation.

Almost all existing brain-computer interfaces are wired systems — a cord literally runs from a person’s head to a machine.

This is because it’s hard to wirelessly read and transmit signals from a brain implant to an external device with the same level of fidelity that wired systems deliver.

It’s easy to see why wired brain-computer interfaces aren’t ideal — who wants to be tethered to a machine all day? — but they’re also holding back research, since developers can only collect brain signal data while trial participants are actually in their labs.

Now, BrainGate — a multi-institute collaboration of neuroscientists, engineers, and other researchers — has demonstrated a wireless brain-computer interface that records and transmits signals as effectively as wired systems.

The system is called the Brown Wireless Device (BWD).

It’s about half the size and weight of a deck of cards, and it connects to a port on a person’s head (the same one that would normally feed signals from an implant to a cable).

To demonstrate the wireless brain-computer interface, two trial participants with paralysis used it  to move a cursor and type on a computer screen with their thoughts — and it worked just as well as tethered devices.

“(T)his wireless system is functionally equivalent to the wired systems that have been the gold standard in (brain-computer interface) performance for years,” researcher John Simeral said in a press release.

One of the trial participants had two of the BWDs connected to two ports.

Together, the devices had a 36-hour battery life and could record data at a speed of 48 megabits per second (mbps) — in the U.S., the minimum download speed for broadband internet is 25 mbps.

The man used the two BWDs at home, giving the researchers the ability to collect 24 hours of continuous data from his brain.

“We want to understand how neural signals evolve over time,” researcher Leigh Hochberg said in the press release. “With this system, we’re able to look at brain activity, at home, over long periods in a way that was nearly impossible before.”

“This will help us to design decoding algorithms that provide for the seamless, intuitive, reliable restoration of communication and mobility for people with paralysis,” he continued.

The researchers note that the tech could also aid in the design of fully implantable wireless systems — the kind that wouldn’t require people to wear a tiny box on top of their heads in order to surf the internet with their thoughts. 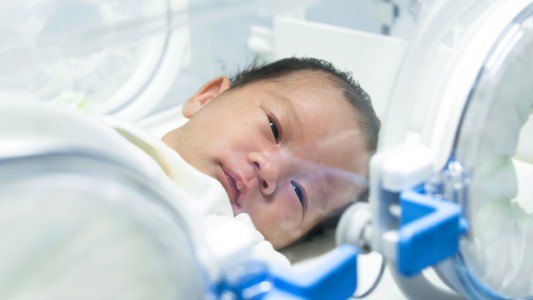