Those hoping to avoid one of the worst side effects of aging—bone, joint and muscle pain that doesn’t go away—might need to exercise a lot harder and more often than previously believed.

According to a new study, only high levels of activity at least once a week—playing tennis, running, swimming, digging with a spade, or doing hard physical labor as part of your job—appears to help ward off chronic musculoskeletal pain in the long-term.

The study, led by Dr. Nils Niederstrasser at the University of Portsmouth, examined the data of 5,802 people aged 50 or more over ten years.

Nearly half—just over 2,400—reported they suffered with musculoskeletal pain at the end of the ten-year period.

Dr. Niederstrasser says that “chronic pain is a huge problem at any age, and one of the main causes for people calling in sick at work or visiting A&E. It is one of the most widespread and complex problems in the medical community and leads, for many who suffer with it, to a lower quality of life and poor wellbeing.”

“It’s well known that pain tends to be more common as we age, so it’s vital we look at what might help prevent and reduce it.”

“The lack of longitudinal studies among older adults of the risk factors for chronic pain is alarming.”

“For many complex reasons, the solution to the problem of chronic pain in older people has proved elusive.”

The study is the first to examine the experience of chronic pain alongside gender, BMI, age and wealth over a long time period.

Report co-author Dr. Nina Attridge, also at the University of Portsmouth, said all activity helped lower the chances of suffering pain but, over time, only high levels of physical activity appeared to lower the risk of someone developing musculoskeletal pain.

She said being poor, being female and being overweight or obese were all found to independently be risk factors for suffering musculoskeletal pain.

She hopes the findings encourage those who design programs to help people avoid chronic pain to include regular vigorous physical activity, weight loss programs and find ways to address helping those on lower incomes.

For the study, moderate exercise included activities such as dancing, walking, stretching and gardening.

Dr. Niederstrasser says that “Such activity—any activity—does help people stay well and feel better than not exercising, but mild exercise does not appear to have a long-term effect on the development of chronic pain.”

“Activity needs to not only be vigorous, it needs to be done at least once a week.”

“A person who cycles, for example, once a month and whose only other activity was light housework would still be classed as sedentary.”

The study found persistent pain was more common in women, possibly because of hormonal differences; in those who were obese or overweight, probably because extra weight adds a burden to the body’s joints; and in those who were less wealthy, possibly because higher disposable income may enable people to seek extra care, in addition to that covered by insurances or national health services, to treat ailments and injuries.

Associations between pain and physical activity among older adults

Chronic pain is a significant societal problem and pain complaints are one of the main causes of work absenteeism and emergency room visits. Physical activity has been associated with reduced risk of suffering from musculoskeletal pain complaints, but the exact relationship in an older adult sample is not known.

Participants self-reported their physical activity level and whether they were often troubled by bone, joint, or muscle pain. Logistic regression analyses revealed the nature of the relationship between musculoskeletal pain and physical activity cross-sectionally and longitudinally over the course of 10 years. Data were taken from the English Longitudinal Study of Ageing, comprising of 5802 individuals residing in England aged 50 or older.

The development of interventions aimed at alleviating and preventing musculoskeletal pain complaints might benefit from incorporating physical activity programs, weight loss, and aspects addressing wealth inequality to maximise their efficacy. 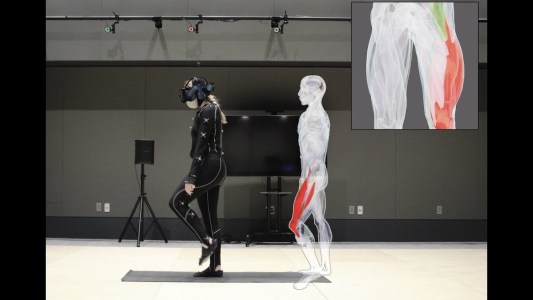 A system for monitoring motion and muscle engagement could aid the elderly and athletes during physical rehabilitation.

Wearables
New VR body suit lets you see inside your body while you exercise
Subscribe to Freethink for more great stories
Subscription Center
Sections
Video
Freethink
Subscribe
We focus on solutions: the smartest people, the biggest ideas, and the most ground breaking technology shaping our future.
Subscribe