In what’s being heralded as a historical moment, the FDA has approved the first new Alzheimer’s drug in nearly two decades.

The drug, aducanumab, is given via infusion and clears protein plaques from the brain; it is the first Alzheimer’s drug to treat the disease’s underlying process, and not just the symptoms of dementia.

Aducanumab’s approval is not without controversy, however; prominent Alzheimer’s researchers, think tanks, and even the FDA’s own advisory panel have called the drug’s efficacy into question. That board voted against the drug’s approval, and three members have since resigned over the agency’s decision.

Even if it did slow cognitive decline in some patients, some experts believe that “the benefit suggested by the evidence would be so slight that it would not outweigh the risk of swelling or bleeding in the brain that the drug caused in the trials,” the New York Times reports.

Even still, anything new in Alzheimer’s drug and therapy options is heartening to the millions of people who suffer from the fatal and incurable disease, and the millions more whose loved ones do.

Many mouse models have looked promising, only for the Alzheimer’s drug in question to fail when it reaches human clinical trials.

John Papatriantafyllou, director of the memory outpatient clinic at Medical Center Hospital of Athens, once told me about seeing slides showing results for a new Alzheimer’s drug. It looked shockingly effective in mice; the clinicians who were in attendance were in awe.

It didn’t save a single human life.

Alzheimer’s is like sand, Papatriantafyllou said, his sadness palpable to me all the way from Greece — always slipping through medicine’s fingers.

This is partly because the brain is extremely difficult to study, understand, and get medicine to. Compounding the problem, dementia cases aren’t usually just one form of dementia; many Alzheimer’s patients will have mixed pathologies, showing signs of other kinds of dementia, as well.

And, as STAT’s Sharon Begley reported in 2019, it may be partly because researchers have been too focused on one theory of how the disease works — sucking up all the oxygen and capital.

The theory: “The amyloid hypothesis has been one of the most tragic stories (in) disease research,” Rachael Neve, a neurobiologist at Massachusetts General Hospital, told Begley. Neve should know; her work helped lay the foundation for said hypothesis.

The amyloid hypothesis focuses on the plaques. The idea is that the amyloid buildup disrupts communications between brain cells and calls in the immune system, causing inflammation. Eventually, the brain cells begin dying.

Unsurprisingly, amyloid has been the target of many Alzheimer’s drug candidates. Several have shown initial success at busting up the plaques.

All have also failed to stop the disease.

A new Alzheimer’s drug: Aducanumab looked destined to be one more tombstone in the drug discovery graveyard.

Created by Massachusetts-based biotech company Biogen, the drug is a monoclonal antibody that clears amyloid plaques from the brain. In March 2019, Biogen halted the phase 3 trials of aducanumab after data suggested that the trial wouldn’t succeed in its goal of reducing dementia symptoms.

“The feeling that the early reports on the clinical efficacy of aducanumab were always presented in an overoptimistic way, appears now to have been right,” Bart de Strooper, of the Dementia Research Institute in London, concluded when the trial was shut down.

So how, then, is aducanumab now approved? After the trial was halted, Biogen reanalyzed the data, which turned up some (slim) evidence that the drug worked. They applied to the FDA based on their new analysis.

The FDA, for its part, cleared the drug using what is known as its Accelerated Approval pathway, which is meant for serious or life-threatening illnesses.

“Instead of judging Biogen’s treatment solely on its effects on cognition, the FDA granted a conditional approval based on Aduhelm’s ability to clear the toxic proteins, called beta-amyloid,” STAT’s Adam Feuerstein and Damian Garde explain.

This, of course,  supposes that the amyloid hypothesis is correct, and that reducing these plaques really will affect the disease.

If Biogen wants to continue marketing the drug, which will be sold under the brand name Aduhelm, it will need to prove this, in a large phase 4 clinical trial, that shows that removing the plaques has cognitive benefits. If they cannot prove this, the FDA can yank approval.

If they do prove it, it could change Alzheimer’s treatment forever.

Hope and controversy: Despite the scientific controversy, some experts and patients have found hope in a new Alzheimer’s drug finally being approved.

“I know this medication isn’t going to save my life. I know it’s not a cure,” Alzheimer’s patient Jeff Borghoff told STAT.

“I just saw my middle daughter get married,” Borghoff said. “She’s talking about having kids now. I have two other kids talking about marriage. That’s what I want. I want more time to spend with my family so that I can create memories for myself and for them. Ultimately, I’ll lose those memories with this disease, but they won’t.”

Not all Alzheimer’s patients will be eligible for the treatment, which currently has a list price of $56,000 per year (though this doesn’t take into account insurance coverage). The University of Kansas’ Jeffrey Burns, who was a site investigator for one of the trials, told the New York Times that he estimates 20 to 40% of his patients would be eligible.

The FDA cleared the drug using its Accelerated Approval pathway, which is meant for serious or life-threatening illnesses.

Doctors will also need to first determine if their patients actually have visible amyloid plaque buildup, which usually entails imaging scans or spinal taps that insurance may not cover, Richard Isaacson, director of the Alzheimer’s Prevention Clinic at Weill Cornell Medicine and New York-Presbyterian hospital, told the Wall Street Journal.

There are concerns around the drug’s side effects, as well; the most common was fluid leaking in the brain, which occurred in 41% of patients receiving a high dose of the drug. Most of the cases were minor or asymptomatic, the Times reports, with headaches the most commonly reported symptom.

As to what happens now, we cannot really be sure, as is so often the case with Alzheimer’s. Biogen’s followup clinical trial may show aducanumab to be an effective Alzheimer’s drug; it may, as some critics fear, lower the standards for drugs coming after it.

“Now we have a potential treatment for them that may modify the underlying disease course. But the largest responsibility for us is to educate patients and physicians as to what this means. This is not going to be penicillin for Alzheimer’s disease.” 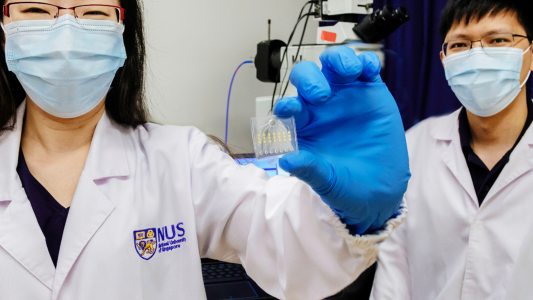 The ExoSCOPE blood test can determine with 95% accuracy whether a targeted cancer therapy is working within 24 hours of administration.