Managing diabetes is hard enough for adults, but it can be even more of a burden for children, who might not understand their disease or why their parents are constantly subjecting them to ouchies (i.e., blood sugar tests and insulin injections).

Now, the FDA has approved a device that could improve the quality of life for diabetic children as young as 2 years old: an artificial pancreas that does the insulin monitoring and delivery for them.

What Is an Artificial Pancreas?

People with Type 1 diabetes have pancreases that don’t produce the hormone insulin like they’re supposed to, and without that insulin, their bodies can’t convert sugar in their blood into energy.

An artificial pancreas can mean fewer times children have to stop to take care of their diabetes.

That can cause a host of health problems, including blindness, organ damage, or even death, so diabetics must check their blood sugar levels multiple times daily and give themselves regular injections of insulin.

An artificial pancreas is a system that automates insulin delivery to some extent.

A sensor will regularly monitor the user’s blood sugar level through the skin of their abdomen or arm. It communicates those levels to an insulin pump, which is typically worn on a belt around the waist. The pump will then deliver insulin as needed via a catheter inserted in the abdomen.

The FDA approved its first artificial pancreas, Medtronic’s MiniMed 670G, for patients at least 14 year old in 2016, and it’s since lowered the approved age for that device to 7.

Now, the agency has approved another Medtronic creation, the MiniMed 770G, for diabetics between the ages of 2 and 6 — making it the first artificial pancreas approved for very young kids.

Unlike its predecessor, the MiniMed 770G is Bluetooth-enabled and comes with a companion app. Parents can use this app to monitor their child’s diabetes, trigger insulin delivery during meals, and share data with their child’s pediatrician, if needed.

“Artificial pancreas technology can mean fewer times children and their families have to stop everything to take care of their diabetes,” University of Colorado researcher Paul Wadwa, who has studied the use of artificial pancreases in kids, said in a press statement. “Instead, kids can focus on being kids.”

The Cost of Care

Medtronic has not released the cost of the new artificial pancreas, but the MiniMed 670G had a retail price of $8,000 as of 2018. Even with health insurance, diabetics can end up paying $1,000 for a commercial artificial pancreas.

Some within the diabetes community have developed DIY artificial pancreas systems as a cheaper alternative, but those devices may carry extra safety risks — in 2019, a patient suffered an insulin overdose due to his homemade pancreas, prompting the FDA to issue a warning about the devices. 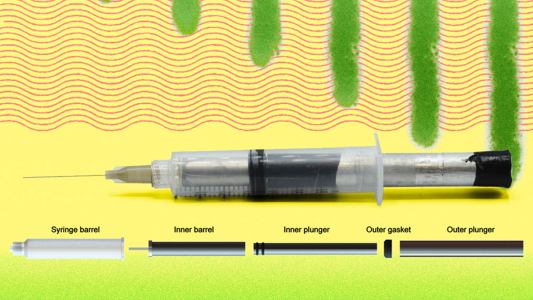 A double-barrel syringe developed at MIT makes it possible to inject highly viscous biologics, making them more accessible to patients.