For people suffering from a rare disease, a medical diagnosis can take months or even years.

Now, because of a new technique from scientists at Stanford, same-day genetic results could be around the corner. It could speed up the discovery process for many mysterious diseases and help patients begin to understand and treat their life-altering conditions.

What they did: In a race against the clock, the Stanford Medicine team, led by geneticist Euan Ashley, went from obtaining a blood sample to diagnosing an illness in just 8 hours, on average.

One of the genomes took only five hours and two minutes to sequence, which set the world record for the fastest whole-genome sequencing.

“A few weeks is what most clinicians call ‘rapid’ when it comes to sequencing a patient’s genome and returning results,” Ashley said in a statement.

In a six-month study, the researchers enrolled and sequenced the genomes of 12 individuals in less than a day each. Five of the patients received a genetic diagnosis.

“It was just one of those amazing moments where the right people suddenly came together to achieve something amazing,” Ashley said. “It really felt like we were approaching a new frontier.”

The researchers worked to speed up every element of sequencing a patient’s genome. They hand-delivered the samples — running them to the lab. They increased computer capacity with a machine composed of 48 sequencing units, known as flow cells, to process enormous amounts of data.

One of the genomes took only five hours and two minutes to sequence, which set the world record for the fastest whole-genome sequencing.

While they used algorithms to scan the DNA data, looking for disease-causing mutations, a scientist’s trained eye did the final assessment. They compared the patient’s gene variant with those known to cause disease.

Another critical feature of their method was taking a “long-read” approach. Typically in whole-genome sequencing, the genes are chopped up into short segments, scanned, and then pieced back together in a computer.

But the process isn’t perfect, and there can be errors in the final steps. The long-read approach preserves long genome segments, reducing error and speeding up the process.

“Mutations that occur over a large chunk of the genome are easier to detect using long-read sequencing. There are variants that would be almost impossible to detect without some kind of long-read approach,” Ashley said.

Why this matters: According to the National Institutes of Health (NIH), there are more than 7,000 rare diseases. 72% of them are genetic, and 70% affect children.

For many patients, detecting symptoms and determining their cause is the first step to treatments that could lead to a better life. But because these diseases are rare, it often takes months or years for answers. This ultra-rapid DNA sequencing could be a game-changer for facilitating a faster diagnosis, reports Singularity Hub.

Whole-genome sequencing allows doctors to know a patient’s complete genetic makeup — from the genes that give them their eye or hair color to those that cause rare disease. Once a doctor knows which gene is causing the disease, they can begin to offer treatments faster.

Indeed the Stanford method proved to work well for Matthew, a 13-year-old patient who arrived at the hospital experiencing a strange type of heart failure. The doctors thought it could be one of two things: myocarditis (an inflammation of the heart) or a genetic mutation that is associated with heart function.

Each situation would require a completely different approach. Myocarditis could be treated, but a genetic mutation would likely require a heart transplant.

Matthew’s parents enrolled him in the rapid sequencing study. The team sequenced his DNA, and within a few hours, the family had answers. Matthew had a genetic mutation and needed a heart transplant. He was immediately added to the transplant list, and was given a new heart less than a month later. 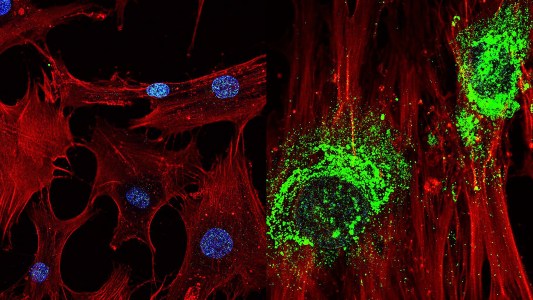 Biology
Sonic waves could help bones grow back after cancer
By Kristin Houser
Subscribe to Freethink for more great stories
Subscription Center
Sections
Video
Freethink
Subscribe
We focus on solutions: the smartest people, the biggest ideas, and the most ground breaking technology shaping our future.
Subscribe