Healing a broken bone can be a lengthy — and painful — process. One way to speed it up? Add electricity.

When bones are placed under pressure, they naturally produce a small electric current that encourages bone cell growth. Doctors have long taken advantage of this fact, using implants to deliver electrical stimulation to broken bones.

The problem is that these implants often contain toxic batteries and require patients to undergo removal surgeries.

Now, University of Connecticut engineers have created an implant that overcomes its predecessors’ shortcomings, delivering electrical stimulation to broken bones in a safer, less-invasive way.

At the center of the UConn team’s creation, detailed in the journal Nano Energy, is a substance more often associated with smoothing faces than healing bones: PLLA.

The commonly used dermal filler is “piezoelectric,” meaning it gives off an electric charge in response to vibration. It’s also non-toxic and dissolves in the body over time.

Rather than simply building an electrical stimulation implant out of PLLA, the UConn team decided to fashion it into a bone scaffold — something for the new bone cells to grow on.

Once in place, an external ultrasound could then be used to very slightly vibrate the implant, generating a small electric voltage. After a while, the implant would simply dissolve on its own.

The UConn researchers tested their electrical stimulation technology on mice with skull fractures, and it appears to work as hoped, according to researcher Ritopa Das.

“The electric field (…) seems to attract bone cells to the site of the fracture, and promote stem cells to evolve into bone cells,” Das said in a press release.

The UConn researchers are now trying to answer the question that’s puzzled doctors for decades: Why does electrical stimulation encourage bone growth in the first place?

If they can figure that out, they’ll be able to use the information to further develop their implant, making it even more conducive to bone growth.

In the future, though, Das envisions the team’s creation being used to help heal more than just bones.

“This technology can possibly be combined with other factors to facilitate regeneration of other tissues, like cartilage, muscles, or nerves,” she said.

Robotics
NASA is sending a robot surgeon to the ISS
A MIRA surgical robot is heading to the ISS in 2024 so developers can test its potential to help astronauts survive medical emergencies.
Up Next 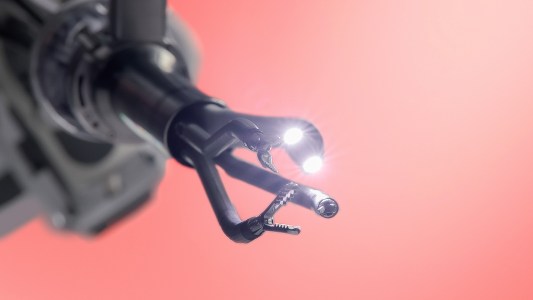 The advancement of robotic surgery systems is expanding physical limitations to allow for minimally invasive procedures and improved patient recovery.