Like acid-infused jellyfish, the masks are a cacophony — grapefruit-pink and ’90s teal, orange hard candy and heliotrope, a car crash of mosaic amoebas and exploded flowers.

But important as fashion is (and we’ll cross that catwalk again), it is the functional options that are most important: Cubacub is making masks for people with disabilities.

Cubacub’s clothing line, Rebirth Garments, features designs made for people often ignored by fashion as a whole: gender-nonconforming people, transgender people, and people with disabilities. They are bringing their skill and approach to bear on making masks for people with disabilities, those for whom the ear loops, materials, or covering of half a face could cause unintended complications.

The constant stream of requests Cubacub has received for their masks speaks to the need the community is feeling in the midst of a pandemic.

“I haven’t even had a chance to even put masks up on my site, because I’ve had so many requests for them even without me putting them up,” Cubacub says. (They’ve since found a moment to update their Etsy.)

One key concern? Ear loops. Social media posts from healthcare workers on the frontlines reveal the issue: after hours, the elastic starts to rub and pull to the point of pain and potentially injury.

There are any number of sartorial hacks online, from ponytails to the barrel of plastic monkeys.

But masks for people with disabilities have considerations beyond comfort.

“Some (people with disabilities) might not have ears, or both of their ears,” Cubacub says. “Or like if you wear certain kinds of hearing aids, it might also get in the way. Or a cochlear implant.”

Masks for people with disabilities need to take these various possibilities into account. Cubacub uses a variety of straps to help people with everything from comfort to diminished fine motor skills.

Cubacub’s personal favorite option features an elastic top band and a tied closure on the bottom.

“That one seems to be the most successful and the most comfortable for people, overall,” Cubacub says, and the design seems to work well for a wide range of people. For people who do not have the fine motor skills for tie-off loops, Cubacub uses velcro.

A Window Into Style

Straps may be physically challenging, but the lack of context, emotion, and lip motion lost while covering half the face can make interacting with others extremely difficult for people with hearing loss or who do not speak English as their first language.

Even if you are not reading lips, being able to see the mouth is important for various sign languages, Cubacub says. “For any kind of sign language, there’s a lot of facial components to the language. Just being able to understand the intent behind a sentence.”

Cubacub makes masks with plastic windows in the middle, allowing the wearer’s mouth to be seen.

The masks also allow people to feel seen, plastic window or not. They are evidence that someone cares about their experiences, which are often shunted aside by everyday culture, both before and in the midst of a pandemic.

This is where fashion strides back into the conversation. “When something doesn’t look as medical and it becomes a fun accessory, then you’re more likely to want to wear it,” Cubacub says. 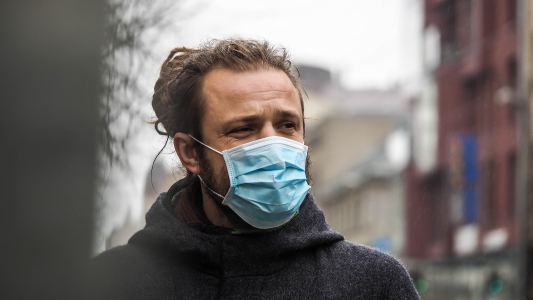 As their numbers swell, some survivors are reporting long-term health effects of COVID-19.

Coronavirus
The long-term health effects of COVID-19
By B. David Zarley
Subscribe to Freethink for more great stories
Subscription Center
Sections
Video
Freethink
Subscribe
We focus on solutions: the smartest people, the biggest ideas, and the most ground breaking technology shaping our future.
Subscribe