A school of fish-y microbots could one day swim through your veins and deliver medicine to precise locations in your body — and cancer patients may be the first people to benefit from this revolution in nanotechnology.

How it works: Scientists recently printed teeny tiny microbots in the shape of different animals, like fish, crabs, and even butterflies. But the coolest thing with these bots is that they don’t stay in one shape — they can morph into different shapes because they are 4D-printed.

4D printing works the same as 3D printing, the only difference is that the printing material allows the object to change shape based on environmental factors.

In this case, the bots’ hydrogel material allows them to morph into different shapes when they encounter a change in pH levels — and cancer cells, as it happens, are usually more acidic than normal cells.

The microrobots were then placed in an iron oxide solution, to give them a magnetic charge.

This combination of shape-shifting and magnetism means the bots could become assassins for cancer — destroying tumors without the usual collateral damage on the rest of the body.

The results: The researchers placed the bots in a petri dish with artificial blood vessels. They used magnets to steer the bots through the blood vessels toward a part of the solution that was higher in acidity (mimicking cancer cells).

When the microbot “fish” came upon the cancer cells, they opened their mouths and released cancer drugs precisely on target, killing the cells.

And the other design — micro-crabs — didn’t disappoint, either. When they came upon the cancer cells, they released the cancer drugs that had been clasped in their micro-claws.

Why it matters: Right now, we don’t have many good ways to deliver medication only to the part of the body that needs it.

For example, chemotherapy is often our best approach to cancer, but it has a major drawback: it’s like carpet bombing a city, when what’s really needed is a sniper to take out the bad guys.

In its quest to kill the unhealthy cells, chemotherapy often kills the healthy ones, too, which can be really dangerous to cancer patients. Treatment sometimes has to be interrupted to give patients a break, allowing the cancer to grow again.

While scientists have developed numerous microrobots before to attempt to solve this problem, most can’t change shapes to complete a complex task, like releasing drugs, or can’t be remotely guided.

These microbots would allow for that to happen. Theoretically, these bots could be inserted into our bloodstream in a very minimally invasive manner and be guided to the tumor via an external magnet.

But there’s more engineering work to do even before we get to animal or human studies. If these microbots are going to become a usable treatment, they’ll need to be made even smaller. And, according to New Atlas, we still need to develop a tracking system for the little bots — we wouldn’t want to lose them in the body! 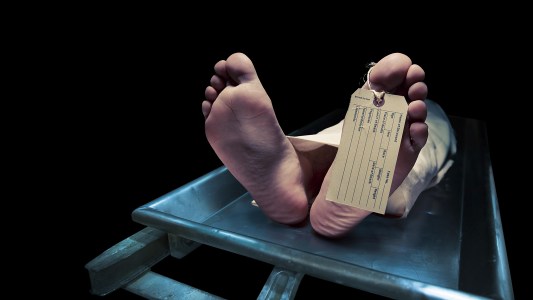 Australian scientists found that bodies kept moving for 17 months after being pronounced dead.

Biology
Dead bodies keep moving for more than a year after death, study finds
By Mike Colagrossi
Subscribe to Freethink for more great stories
Subscription Center
Sections
Video
Freethink
Subscribe
We focus on solutions: the smartest people, the biggest ideas, and the most ground breaking technology shaping our future.
Subscribe