You might resent your skin for being the source of your acne or dandruff woes, but even the most finicky of skin tends to be resilient when you need it most. An effective miracle occurs nearly every time we suffer a cut or a scrape: Our skin rebuilds itself from scratch. When damage to the skin is too severe for self-repair—say after a serious burn—doctors can often just graft skin from an innocuous region like the inner thigh to replace it. The new skin takes hold and grows as if it had been there all along.

(T)he human brain remains one of the most difficult organs for doctors to rehabilitate, let alone rebuild.

Our brains couldn’t be more different — the human brain remains one of the most difficult organs for doctors to rehabilitate, let alone rebuild. Following a traumatic brain injury (TBI) or stroke, some patients are able to recover a portion of their lost abilities after months or years of committed therapy. But even in the best of cases, the brain doesn’t actually repair its damaged parts. Instead, it trains surviving brain circuits to take over for circuits that have been destroyed.

Such retraining of the damaged brain represents the best shot many brain damage victims have for recovery. Automated rehabilitation devices, like the robotic exoskeleton ReWalk, can help patients learn how to walk after suffering from brain damage, and neuroscientists are currently beta-testing brain implants that could allow paralyzed patients to control computer cursors or prosthetic limbs with their thoughts.

Nevertheless, neither of these modern brain rehab strategies comes anywhere close to the skin-grafting therapies available to burn victims. Indeed, until recently, the mere thought of regenerating the brain seemed laughable to most scientists, because the brain was believed to lack a key ingredient for self-repair: stem cells.

Stem cells are the workhorses of tissue regeneration. The skin is a regenerative rockstar because it contains countless skin-specific stem cells, called keratinocytes, which constantly generate new skin cells both in healthy skin and after an injury occurs. For the majority of the history of neuroscience, conventional wisdom held that the brain must lack any so-called neural stem cells, because brain damage was usually permanent.

However, in 1998, a groundbreaking study led by neuroscientist Fred Gage turned this dogma upside-down by showing that areas of even the elderly human brain possessed what are called adult neural stem cells, which continuously produce newborn neurons.

Suddenly, the pipe dream of regenerating the brain seemed like a real possibility, but there was a major hitch. Unlike keratinocytes, which reside underneath every square inch of our skin, adult neural stem cells are few in number and live in only two hard-to-reach nooks of the human brain. No surgeon would dare dig into a patient’s brain to harvest these stem cells for a brain tissue graft. Doing so could cause even more damage, and there’d be no guarantee such a graft of adult neural stem cells would even work.

For any brain regeneration strategy to fly, adult neural stem cells (or an equivalent substitute) would need to be obtained in large numbers, safely grafted into a given site of injury, and precisely coaxed to mimic the natural behavior of the adult neural stem cell. Only then could we rebuild damaged neural circuits.

Back in 2000, there were few options for obtaining adequate numbers of human stem cells for any purported type of tissue graft, let alone a brain tissue graft. Unborn fetuses can provide stem cells for research purposes, but for grafting to work, it’s better to source stem cells from patients themselves. (Grafts between individuals often fail due to immune system rejection of foreign tissue, which is why burn victims usually receive skin grafts from their own bodies.)

In 2007, Japanese researchers led by Shinya Yamanaka overcame this problem by devising a method for converting an abundant type of skin cell, the fibroblast, into a stem cell, dubbed the induced pluripotent stem cell (iPSC). The team found that activating four genes inside of skin fibroblasts “reprogrammed” them into iPSCs, which could then be spurred to mature into any type of cell, from muscle to blood to neuron. (This discovery earned Yamanaka a Nobel Prize in 2012).

With this technology, doctors could conceivably harvest skin fibroblasts from a patient, reprogram those cells into iPSCs, grow the iPSCs into the desired cell type, and then graft those mature cells back into the same patient to help rebuild a damaged part of the body. The only remaining question: Could this process work for brain damage?

Since Yamanaka’s discovery in 2007, researchers have been steadily working towards a regenerative brain therapy. Armed with a better understanding of how neural stem cells work, scientists can now easily convert skin fibroblasts into iPSCs, then into neural stem cells, and then into neurons. Some labs have succeeded with producing “cerebral organoids” out of iPSCs — artificial amalgamations of neurons that begin to resemble a miniature human cerebral cortex, suspended in a nutrient-rich solution. These organoids are perfect for studying how newborn neurons wire up, a prerequisite for grafting any iPSCs or neural stem cells into the human brain.

Others have taken inspiration from Yamanaka’s work to reprogram support cells, or glia, into neurons directly inside the mouse brain. This strategy that avoids moving cells from body to petri dish and back again. And just this year, scientists converted mouse fibroblasts directly into neural stem cells using a cocktail of nine drugs, drastically simplifying the reprogramming process by skipping the initial conversion to iPSC. Perhaps the best indication that therapies for brain regeneration might soon become reality is the fact that thousands of scientists worldwide are now actively studying it.

It’s no longer unreasonable to envision a future in which brain damage is countered not only by rehabilitation, but also by regeneration…

It’s no longer unreasonable to envision a future in which brain damage is countered not only by rehabilitation, but also by regeneration. The details of such a hypothetical treatment, let alone its testing in clinical trials, remain at least a decade or two away. Right now, no one can say for sure whether such a therapy will involve the grafting of reprogrammed stem cells into the brain, or if we’ll be able to skip grafting altogether and directly reprogram support cells that are already in the brain into neural stem cells.

Or maybe, just maybe, the first regenerative brain therapy will be something different altogether. Scientific discoveries are easier to explain after the fact than they are to predict. But this much we can say for sure: the future looks bright for many brain injury patients who’ve long believed they’d never be able to fully recover what they lost. 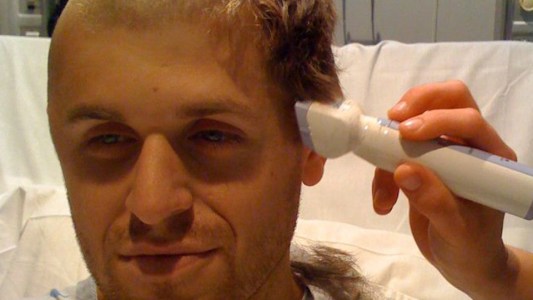 The unbelievable story of the day Jordan Riley was declared brain dead and his journey of re-learning how to be human.

Neuroscience
How to rebuild a broken brain
Subscribe to Freethink for more great stories
Subscription Center
Sections
Video
Freethink
Subscribe
We focus on solutions: the smartest people, the biggest ideas, and the most ground breaking technology shaping our future.
Subscribe