The driverless future of construction robotics

Imagine a job site where one person can oversee a fleet of self-guided machines. The future of construction is here.
Watch on YouTube
Up Next
Now Playing
Can a robot really freestyle?
7:08 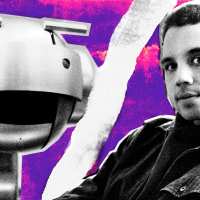 Innovation in the construction industry has remained mostly stagnant for decades, but the implementation of construction robotics is poised to radically alter the way we build.

Many of the man-made structures necessary to sustaining our way of life are getting older. Bridges are starting to fall apart, dams are beginning to break, and levies are becoming overwhelmed. The primary reason preemptive projects aren’t underway to fix these issues, before they become disastrous, is that they are simply too expensive.

If we don’t take care of them though, they’ll only end up costing more in the long-term. Built Robotics believes the solution to these problems, and the future of the construction industry, lies in autonomous construction equipment.

As its founder and CEO, Noah Ready-Campbell, explains, “These kinds of massive infrastructure projects need to happen over the next 10-20 years and I think construction robotics are going to play a really big role.”

If a construction worker from the year 1900 were to time travel to a present-day build site, it would look surprisingly similar. At the start of the 20th century, hydraulics began to make their way into the construction industry and in the 1960s, they became mainstream.

What once required the power of cables and steam now had the precision of hydraulics. Hydraulics powered excavators, bulldozers, backhoes, cranes, concrete pumping systems, support cylinders, and brick molding machines. However, not much has been innovated on a grand scale in the industry since.

The introduction of construction robots could soon change that, but it won’t look like a hard-hat-wearing C-3PO. Ready-Campbell discusses, “We really believe that what’s going to happen next is that you’re not going to see the innovation on the mechanical side. Instead, you’re going to start to see it on the software side.”

After college he got a job at Google and gained inroads in Silicon Valley, where he got the idea to finally merge tech and construction. After telling his father about an idea to automate heavy equipment, his dad said he’d better learn how to operate the equipment first.

“The next morning, I woke up, I called the local John Deere dealer, and I rented an excavator… Six months later we had our first prototype up and running,” Ready-Campbell explains. Just four years later, Built Robotics has completed a dozen projects in two continents. Today, its equipment has logged 10,000 hours of autonomous operations without a safety incident.

“You set it up, you hit ‘go,’ and you come back at the end of the day when the machine’s done,” Ready-Campbell describes.

Ready-Campbell says, “We write the software that goes inside the system and interface the machine so that it’s able to navigate around the jobsite. It’s using stuff like GPS, cameras, and lidar radar to observe its environment, and then robotic equipment operators are able to load in plans or blueprints and then tell the machine exactly what they want it to do.”

Built Robotics’ software is already turning heads and turning out pockets. They recently raised $33 million in investment funds to progress their model.

While some might worry that equipment like Built’s autonomous excavator will result in countless employees getting laid off, Ready-Campbell sees construction robotics as a force multiplier, not a job eliminator.

The intention of his systems is to support operators on job sites so that, “they don’t have to be doing those sort of mundane, simple tasks which are kind of a waste of somebody with that level of skill. Instead they can focus on the higher touch, higher volume work.” As he states, “Robots don’t automate jobs, they automate tasks.”

With advances like this, we could soon have a job site on which a single operator is operating up to 10 machines at a time, keeping projects moving around the clock. In doing so, a job that would have otherwise taken months could be completed in weeks.

Infrastructure breakdowns like a collapsed dam or a fallen bridge, which could mean catastrophe for thousands, would be remedied faster with the time and cost effectiveness of construction robotics.

“Technology is actually an incredible force for good and the long term vision is not just excavators, not just earth moving, but working on a variety of different tasks throughout the whole construction stack,” Ready-Campbell says.

“If we can figure out ways to let the humans focus on the design, the aesthetic, the art that goes along with building, and then let machines do the more repetitive and mundane tasks, we can actually shape our environment in a way that could have a radical impact on everything.”