Watch on YouTube
Up Next
Now Playing
3D printing prosthetics for kids
7:32 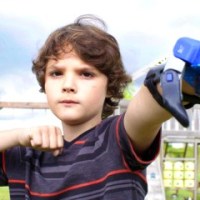 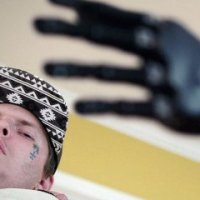 Jason Barnes lost his arm in a horrible accident… and then he became the fastest drummer in the world. Now he’s working with doctors and engineers who are designing ultrasound sensors that could give him back fine motor control. Join us as he sits down to play piano for the first time since his accident.

Today, the one-armed drummer has his sights set on conquering his next musical instrument: the piano. But his cybernetic arm will need some updates, and some fingers, because the advanced prosthetics that he’s been relying on to play drums won’t do much beyond rhythmically tapping a drumstick.

Jason is one of many who are trying to push the boundaries of cybernetic arm capabilities. With the help of Zach, a grad student at Georgia Tech, they hope to close the gap between man and machine by designing and building a bionic arm that will allow Jason to play the piano as well as he plays the drums.

When Jason was 22 years old, he was involved in an electrical accident at work that sent 22,000 volts of electricity through his body. The accident left him badly injured and he and his doctors were forced to make the difficult decision to amputate his right arm.

As a drummer and musician, he felt he had lost everything.

But even before his arm had fully healed, Jason started experimenting with different ways of affixing and “holding” a drumstick. A process of trial and error led him to design and build a custom prosthetic that would allow him to skillfully play the drums like he could before his accident.

After syncing up with Gil Weinberg, a fellow musician and robotics expert, the one-armed drummer could now play drums faster than he ever could—and faster than is humanly possible—with an astonishing 40 beats per second. That’s twice as much as the most capable two-armed drummers.

Using electromyography, or EMG, which reads electric signals generated by the body’s muscles, Jason could start and stop his drumstick’s movement with an immediacy and level of control never before seen. This represented a significant step up from the patterned, start-and-stop limitations of older technology.

Back at Georgia Tech, a second breakthrough occurred when Jason and Zach started incorporating ultrasound technology in the quest for a stronger and clearer signal from the muscles he uses to drum. By identifying these signals, Jason’s bionic arm can operate as if it has five distinct fingers. This would allow him to not only hold and manipulate objects like drumsticks, but to also play instruments that require more finesse and dexterity, such as piano, all with his mind.

While some of the kinks still need to be worked out, initial tests are proving very positive. Jason can play simple melodies like anyone would, by thinking it out. Right now, movement is slow and cumbersome, but as the ultrasound-based research allows Jason, Zach, and Gil to zero in on what makes our muscles tick, it’s only a matter of time before this one-armed drummer adds piano and possibly other musical instruments to his repertoire.

We might not have to wait that long either.

Just a few years after an accident that left him wondering if he would ever drum again, Jason has become the fastest drummer in the world, learned new instruments, and continued to overcome the challenges thrown his way. Jason’s drive has proved indispensable to researchers that are pushing the boundaries of what’s possible.

But what we do know is that the advances in prosthetic arms and modern technology may very well make this one-armed drummer the fastest piano player in the world too—just as soon as they iron out the kinks.