Kate McLean likes to stick her nose into things.

She leans into city alleys, bakeries, subway cars, or newspaper stands, breathing deeply and taking detailed notes. That’s because McLean is “smell catching,” or breathing in to the point of detection, which McLean says is much deeper than your subconscious breath.

Smell is often thought of as the nonessential sense, which makes McLean’s work much more riveting. With the help of volunteers, she creates smell maps — colorful interpretations depicting hot spots of distinct scents. As a researcher and mapper of urban smellscapes at Canterbury Christ Church University, she has mapped cities like New York, Boston, and Paris, making temporary sensory information permanent.

McLean’s work builds on the work of others in what she calls the “smelly community.” In 1790, Jean-Noël Hallé undertook the first recorded smell walk in Paris. His 6 km walk along the Seine became a guidepost for dealing with industry, factory runoff, and effects of humans on cities. Geographer Douglas Porteous was the first to write about smellscapes in the 1980s. Then, three decades later, Victoria Henshaw began discussing smell as something integral to urban planning and design. And currently, Cecilia Bembibre, a researcher at the UCL Institute for Sustainable Heritage, is developing techniques to recover old scents and preserve those that are endangered.

“(Preserving smell is) important in terms of understanding different people’s lives and experiences at different points in history.”

Smell is making a comeback.

For McLean, making a smell map is more about the experience than the end product. Smells, after all, are subject to the moment and individual. Wait a few days or even a few hours, and a rainstorm could replace a city smell with the earthy smell of petrichor.

Freethink spoke to McLean about why it is essential to take time to stop and smell the roses…or the breweries and hair salons. Or dumpsters. Or playgrounds.

Freethink: Can you describe the smell walks?

Kate McLean: I lead smell walks. I give the people that undertake the walks an easy, accessible, nonspecialist way of accessing the smells around them. It’s actually a basic table that they (can) record the smells that they come across. I talk to them a little bit about different parts of the experience of the smellscape that they might be able to discern when they’re walking through it. I talk to them about how to describe the smell. There’s various different research papers that go into how we actually, as humans, encounter smells and how we perceive them. Then they walk and they record that information down, and we stop at frequent points to share that between us.

Freethink: Is this transformative for people?

Kate McLean: Amazingly so. I didn’t think it was. I thought it would just be something to spend some time helping me with my research about uncovering smells that exist in different cities at different times of day.

Around 2011, I was doing a smell walk in Paris, and it was with a group of market researchers. They were looking at the idea of habituation.

As humans, because smell constantly alerts us to things that change, if we get used to something, we become habituated to it, and we don’t notice it. They were really interested in that — particularly some products that claimed to be able to neutralize a smell in your house.

“There may be a smell that becomes associated with different celebrations or different places as our landscape changes.”

We did a smell walk. We went up through a street that has cafes and restaurants, the central square at one end, and bakeries. It has outdoor produce. It has a flower shop. It has a cheese shop. We put our noses, literally, into each of these different shops.

I saw them the next day. One of them said, “You actually have changed my life. Now I can’t walk past anywhere without smelling it and thinking about what that means in relation to what I’m seeing.”

Freethink: There are five senses. You could make a map based on touch, or visual experiences like colors. There are a lot of ways to experience the world around us. But smells change moment by moment, person by person. Why did you choose smell?

Kate McLean: I chose it because it had the most intrigue and most variability. The fleeting aspect of it, I find incredibly interesting, in terms of something that seems very hard to pin down. It calls into question can we pin things down? What is the nature of the smellscape? It’s a constantly shifting mechanism.

Freethink: Why is it important to preserve smells, like your smell maps, or like Cecilia Bembibre’s work preserving scents?

The smells that have surrounded us in the past are potentially no longer there. Having some sort of flicker of a smell, or an accessible database to be able to understand not just the visual architecture of places, but also the smells that would have been present, becomes a really important part of understanding the world more holistically.

(Bembibre) and I are working together to combine our two approaches to be able to look at how smells might be archived in the future, using a combination of my visual techniques, her more scientific techniques, and what the latest research indicates about how important context is to that situation.

It’s lovely, actually. Between us, we get an awful lot more depth and a lot more understanding about what that experience comprises.

In literature, smell is used as a mechanism by authors of creating an environment or an atmosphere. Any number of authors will use a particular smell as a way of recreating a place and the mood and the feel.

Freethink: What is next for your work?

Kate McLean: With a lot of maps, you can’t tell whether you’re going to be in a really interesting, vibrant neighborhood. Smell is one of those key indicators of human activity.

One of my goals for the future is to look at developing another version of an app that I started work on, which would enable people to do a self-guided smell walk and record their data — which then live-feeds into an animation. You actually see those pulse points around the world where people have picked up the smell at any given point. You’d be able to compare city maps, but over a period of an hour or days, which would be really interesting. A constant live-feed, interactive smell map would give an indication of where really interesting things or big activities were happening.

Rather than every city homogeneously smelling of a subway smell or Sainsbury’s bakery, as the city loses its distinctive characteristics, then those aromas that people associated with places start to disappear as well. It’s important for us to reconsider those, both in plan but also in the idea about what that might mean for heritage. 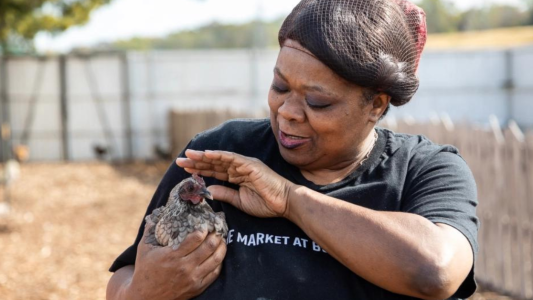 A once impoverished and isolated neighborhood in South Dallas is now flourishing thanks to Bonton Farms.

Urban Living
This urban farm in Dallas grows financial and social opportunities for residents
By Amanda Winkler
Subscribe to Freethink for more great stories
Subscription Center
Sections
Video
Freethink
Subscribe
We focus on solutions: the smartest people, the biggest ideas, and the most ground breaking technology shaping our future.
Subscribe