A brilliant, icy, reflective moon — roughly 90% the size of our own — Jupiter’s satellite Europa has earned outsized scientific and cultural interest.

Beneath its icy shell, estimated at 10 to 15 miles thick, lies an environment that shares some similarities to our own. The moon is thought to have an iron core and rocky mantle similar to ours, but it’s another Earth analogue that is most exciting: evidence indicates the presence of a salty ocean, potentially up to 100 miles deep.

And with a potential ocean, the potential for life.

Now, Stanford scientists studying climate change in Greenland may have made a discovery that bolsters the idea of a habitable ocean on Europa.

Double ridges: Europa’s ice shell is scored by massive gashes, double ridges that rise almost 1,000 feet, with expansive valleys between them. First identified during the Galileo missions of the 1990s, it is still a mystery how these ridges are created.

“Double ridges are the most common surface feature on Europa and occur across every sector of the moon, but their formation is poorly understood,” the researchers wrote in their study, published in Nature Communications.

Much, much closer to home, the Stanford team was analyzing the Greenland ice sheet using airborne, ice-penetrating radar when they noticed something unusual beneath the ice.

“We were working on something totally different related to climate change and its impact on the surface of Greenland when we saw these tiny double ridges – and we were able to see the ridges go from ‘not formed’ to ‘formed,’ ” Dustin Schroeder, associate professor of geophysics and study co-author, said.

A range of radar data from NASA’s Operation IceBridge from 2015 to 2017 showed how a double ridge, in northwest Greenland, was formed.

The ice began to crack around pockets of liquid water that were refreezing inside of it, the researchers said, causing the twin peaks that are the hallmarks of the geographic feature to rise.

“In Greenland, this double ridge formed in a place where water from surface lakes and streams frequently drains into the near-surface and refreezes,” lead author Riley Culberg said.

Europa’s ice shell is scored by massive gashes, towering double ridges with expansive valleys between them. First identified during the Galileo missions of the 1990s, their origin is a mystery.

It’s possible, then, that the double ridges of Europa may be caused by a similar mechanism — perhaps water from a liquid ocean is being forced up through cracks into the ice shell, then refreezing, Culberg suggested.

“We are another hypothesis on top of many – we just have the advantage that our hypothesis has some observations from the formation of a similar feature on Earth to back it up,” Culberg said. “It’s opening up all these new possibilities for a very exciting discovery.”

If their theory is correct, it suggests that the liquid water can form pockets in the shell, creating a dynamic environment that might be a good place to look for life.

“Because it’s closer to the surface, where you get interesting chemicals from space, other moons and the volcanoes of Io, there’s a possibility that life has a shot if there are pockets of water in the shell,” Schroeder said.

Journey to the hidden sea: Our romantic and exciting picture of Europa may be filled in with fresh detail soon.

The ESA currently has 2023 penciled in for JUICE’s launch date. The JUICE spacecraft will spend three years circling around and observing Jupiter’s three largest moons, Europa, Ganymede, and Callisto.

Europa Clipper, scheduled to launch in October 2024, is designed to investigate whether the satellite could actually be a prime candidate for supporting life, and will carry ice-penetrating radar similar to the kind used over Greenland. 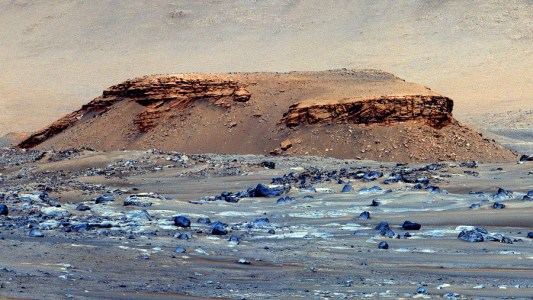 Without driving anywhere, the rover was able to solve one of the big unknowns, which was that this crater once held water.