The Mars 2020 mission is set to launch by the end of the month, putting NASA’s autonomous vehicle — the Perseverance rover — onto the Red Planet, where it will become the latest step in the hunt for extraterrestrial life.

Aside from exploring a former lake delta for signs of previous lifeforms (particularly microbes), Perseverance will have one Martian year (687 Earth-days, which would be far, far too long for 2020 to last) to finish a laundry list of jobs.

Besides the hunt for ancient life, the rover needs to collect dust and rock samples, study Mars’s surface composition and weather, serve as a tech demo, and — most awesomely — launch a freakin’ space helicopter to test out flight in the thin Martian air.

Perseverance will be the fifth rover on Mars, following Sojourner, Spirit, Opportunity, and Curiosity. But compared to those space sloths, Perseverance is an F1 car. It’s more autonomous and can cover more ground than any previous iteration, hopefully allowing it to fit its whole slate into that Martian year.

Basically, Perseverance is the closest thing to NASA’s autonomous vehicle dreams yet.

That’s important, because a Mars rover is … not exactly quick on the uptake.

Per Wired, a rover’s speed and range is limited by its distance from Earth and Mars’s decidedly computer unfriendly environment.

Mars may be close in stellar terms, but that li’l blood ball is still, like, really far away — like over 65 million miles far away. That means that a computer signal, even traveling at the speed of light, would still take 22 minutes to get there, and that’s one-way. It’s physically impossible to operate rovers in real time.

And you can’t just huck a traditional computer vision program onboard, either. While it’d be nice to give it the autonomy of, say, a Tesla, Mars ain’t Earth. You can’t plug it in when that power-hungry system needs a boost, and the LiDAR laser-based system that most autonomous vehicles use to “see” their surroundings is also big, expensive, and fragile — so, not exactly up to Martian snuff.

Instead, NASA’s autonomous vehicle is relying on a vision system that’s basically the same as ours. By using a left and right camera, Perseverance can create a three-dimensional picture of its surroundings, and navigate from there. This is combined with a visual odometry program that uses the comparative distance of objects over time to calculate how far the rover’s moved.

Operating those programs is a computer that’s top of the line … for the late ’90s. Mars’s lack of a thick, protective atmosphere or a magnetic field means the whole system just gets bathed in charged particles from the sun. Those particles can cause computers to go haywire, Wired says; transistors going from zero to one or vice versa, systems crashing, data disappearing, the rover failing, dogs and cats living together … it’s a big Twinkie.

The answer is to use radiation-hardened computers. Lean and mean, unfortunately, protection requires sacrificing some performance — like a knight in plate armor or a bullet-proof vehicle.

“The US space industry is traditionally very risk averse, and there’s a logic to that,” Minal Sawant, the space systems architect at Xilinx, the unpronounceable tech firm that built Perserverance’s eyes, told Wired. “One small error can cause a whole mission to go south, so they want to use a component that’s already been to space rather than try new technology. Reliability is key.”

It’s not that the computers running NASA’s autonomous vehicle will be old; they’re just compromised by their protective gear.

Careful readers will note my use of the plural up there. And that’s some fine comprehension, readers, because multiple computers are the key.

The rovers of yore — brave pioneers that they were — had a stuttering, staccato approach to moving on Mars. Like a chess player, the previous rovers would take a snapshot of their surroundings, move forward, then pause and ponder their next move. That’s because their visual systems needed to share space with the other things their onboard computers needed to do — like navigation and driving.

What Perseverance has is essentially a robotic pilot.

By using two computers, NASA’s autonomous vehicle can split the tricky task of navigation, meaning a smoother ride with fewer stops. The rover’s main computer can chart the course, and its machine vision can make sure it doesn’t bonk into a boulder.

That’s where that Ferrari-esque (well, not this year) performance leap comes in.

“The longest drive that any Martian rover has ever done in a day is 219 meters,” Twu told Wired. “We’re able to drive around 200 meters per day.”

NASA’s autonomous vehicle has already hit the proving ground, the Jet Propulsion Laboratory’s Mars Yard, and been run through countless simulations, in an effort to ensure no navigational snag will stop this rolling thunder from its noble mission.

Godspeed, you beautiful rover, and may your wheels and two-computer driving system stay sure.

Editor’s note: This article was updated on 7/28/20; Perseverance will be the fifth rover on Mars, not fourth. 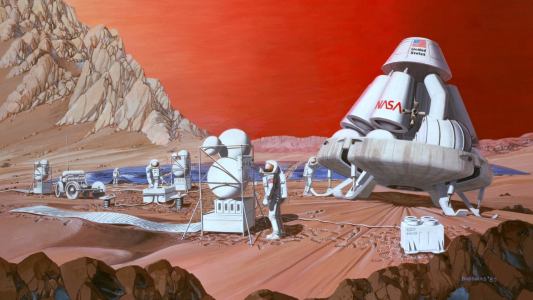 After a simulated Mars mission, researchers come home with lessons we can all live by.

Aerospace
What a simulated Mars mission can teach you about life
Subscribe to Freethink for more great stories
Subscription Center
Sections
Video
Freethink
Subscribe
We focus on solutions: the smartest people, the biggest ideas, and the most ground breaking technology shaping our future.
Subscribe