Astronomers spent six years and about $34 million building a new telescope that could help explain the birth of our universe.

And when they were finished, they dropped it into the world’s deepest lake.

This wasn’t a case of clumsy cosmologists — Siberia’s Lake Baikal is the perfect home base for a telescope designed to detect “ghost particles.”

“Ghost particles” is a fitting nickname for neutrinos. They’re the smallest particles known to man, with barely any mass, and they hardly interact with anything else in the universe.

This makes neutrinos incredibly difficult to study — but scientists really want to study them.

Not only are the tiny particles everywhere — in the last second, a trillion of them passed right through your eyes — they’re also some of the oldest particles in the universe.

Many were formed in the first second after the Big Bang, and by studying them, we might glean insights into how the universe evolved and what was happening when everything sprang into existence.

As if that isn’t fascinating enough, scientists suspect that dark matter — the mysterious substance believed to hold galaxies together — might be made of neutrinos.

But again, we won’t know for sure until we study the particles — which is where this new underwater neutrino detector comes into play.

Because neutrinos interact so weakly with the world around them, the best way to learn about them is to collect as much data about as many neutrino interactions as possible, so the bigger the neutrino detector, the better.

The best place for that neutrino detector is deep underwater — when passing through water, the particles move at incredible speeds, and that produces a type of light called Cherenkov radiation that can be recorded and studied. (Water is also dense and filters nearly all of the other radiation that could interfere with the measurements.)

Lake Baikal is perhaps the only lake where a neutrino telescope can be deployed.

The new neutrino detector in Siberia is called the Baikal deep underwater neutrino telescope (or Baikal-GVD), and it’s a collaboration between scientists in Russia, Germany, Poland, Slovakia, and the Czech Republic.

It consists of more than 2,300 orb-like optical modules that can detect Cherenkov radiation. These modules are strung like pearls in clusters that extend from 2,500 to 4,300 feet below the surface of Lake Baikal.

“Lake Baikal is perhaps the only lake where a neutrino telescope can be deployed because of its depth,” Bair Shoibonov, a scientist at the Joint Institute for Nuclear Research in Moscow, told AFP. “We need the greatest possible depth — over a kilometer.”

Baikal-GVD is now the second largest underwater neutrino detector in the world — only Antarctica’s IceCube is bigger — and its creators plan to add even more modules in the coming years, all in the hopes of gaining insights into the mysterious “ghost particles” all around us. 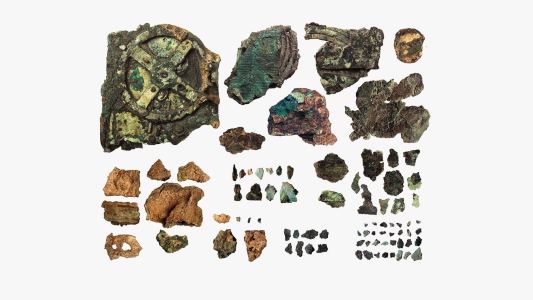 A new model explains how an ancient computer known as the Antikythera Mechanism could have made complex astronomical predictions.