Every once in a while, a stellar cataclysm occurs in our Universe, bringing the life of a star to an end. The most common type of cataclysm is a core-collapse supernova, where a massive star’s interior implodes, leading to a runaway fusion reaction and a tremendous explosion, where the energy emitted by the star can briefly shine billions of times brighter than a typical star. And yet, it’s the rarer types of stellar cataclysms — superluminous supernovae, hypernovae, tidal disruptions events, and even more exotic explosions — that can shine brighter than anything else we have observed.

In 2018, a new class of explosions was seen for the first time: the “Cow” class. Detected automatically by a facility that monitors the sky for unexpected brightening (or faintening) events, its randomly generated name came out at AT2018cow, where the last three letters happened to spell an actual word. Today, it’s the prototype for a novel class of explosions that occur throughout the Universe. Another event in the same “Cow” class of objects was recently discovered: the first one detected not by its visible light signatures, but by its spectacular X-ray brightening. Known as AT2020mrf, it literally bathed the Universe in X-rays for billions of light-years, including us.

Here’s the science behind what happened.

As they go through their life cycles, stars transform mass into energy through the process of nuclear fusion. By smashing light atomic nuclei together under tremendous pressures and temperatures, they can trigger the formation of heavier atomic nuclei. If you were to put the total masses of the pre-fusion nuclei and the post-fusion nuclei on a scale, you’d find that the ones produced by fusion were slightly less massive than the ones that went into the reaction.

Where did that mass go? It gets transformed into energy through Einstein’s most famous equation: E = mc2.

When AT2018cow was first seen, it appeared simply as a rapidly brightening, high-temperature event: like a supernova, but with some unusual features to it. Some of those features include:

For quite a while, this was puzzlingly difficult to explain.

However, by synthesizing a wide variety of observations from many different observatories, a consistent picture began to emerge. One candidate explanation was that it came from a tidal disruption event, where stars are torn apart through gravitational interactions with a massive yet compact object. However, the long-term nature of the X-rays suggested that a remnant was left behind to power it, eliminating that as a potential explanation. Instead, perhaps it was a supernova after all — albeit one that was in an unusual environment, shrouded by a dense cocoon-like structure of gas.

With that realization, the pieces fell into place. If there were a cocoon of gas surrounding a star that was reaching the end of its life, then:

This new class of objects are now known not exclusively as “Cow” class objects, but rather as FBOTs: Fast Blue Optical Transients.

In fact, there are entire observatories that specialize in making observations of transient objects, where they image the same part of the sky over and over again. They then perform, in an automated fashion, a differential calculation, only looking for changes in the sky from one moment to the next. Only if something has brightened, faintened, newly appeared, newly disappeared, or has otherwise changed somehow — in position or color, for instance — is it “flagged” as a candidate for a transient event. Almost all of our automated transient searches, however, are restricted to being performed in visible light.

That’s part of what makes this newest event, AT2020mrf, so spectacular. It was first found in July of 2020 not by any of the transient facilities explicitly built and designed to find these optical events, but rather by a completely different type of observatory: an X-ray telescope known as the Spektrum-Roentgen-Gamma (SRG) telescope. This X-ray telescope is unique among all the X-ray observatories we have operating today for numerous reasons, but the most spectacular is that it is the only one that plans on imaging the entire sky numerous times over.

The Spektrum-Roentgen-Gamma telescope completed its first full survey of the sky in June 2020, and quickly embarked on its second sweep — of a planned eight — immediately thereafter. The whole point of surveying the sky over and over again is, once again, to look for changes, as they signify an astronomical event of interest. In July 2020, right at the start of that second sweep, something fascinating emerged; an entirely new source of X-ray light — where none had been previously just six months prior — had not only emerged, but was incredibly bright.

How bright was it? The original “Cow” event, AT2018cow had a large and significant X-ray brightness for a supernova. That of AT2020mrf was 20 times brighter in that X-ray light. In addition, both of these events had a substantial but erratic variability in their X-ray brightness, varying rapidly on timescales of less than a day.

It was enough to make the astronomers studying it wonder: Was it possible that this new event was also a FBOT? If so, there should have been an optical transient at precisely the same location. They combed back through the data of the Zwicky Transient Facility to see what was there.

Sure enough, 35 days before the SRG telescope found the remarkable X-ray brightening, an optical brightening had occurred, just as it had for other FBOT events, including the Cow. It possessed other features that made it a remarkably interesting object in its own right, including:

Perhaps most interestingly, the fact that it belongs to a very small, low-mass, dwarf galaxy: one with a mass of only 100 million stars, or less than 0.1% the mass of our Milky Way.

This event, AT2020mrf, is now the fifth event to meet all the criteria for an FBOT, and somehow all five of them have occurred in dwarf galaxies that are forming new stars. This is one of those observed phenomena that make astronomers collectively scratch their heads and note, “that’s funny,” because we have no modern explanation for it.

So, what do you do if you’re a scientist presented with a mystery that you can’t explain, from an object located about 2 billion light-years away?

You take the most sensitive telescopes you can in whatever wavelengths of light you think might hold interesting information and you continue to observe the event, hoping to learn more about its nature and its origins from the clues that reveal themselves over long periods of time. Armed with the knowledge that they had discovered a potentially unique Fast Blue Optical Transient, a team of scientists led by first author Yuhan Yao of Caltech applied for, and received, observing time on NASA’s Chandra X-ray telescope to follow-up on this object. Even though that time didn’t arrive until June 2021, it was well worth the wait.

Some 328 days after the explosion began, NASA’s Chandra X-ray telescope pointed its eyes at this object ~2 billion light-years away. Remarkably, within its first six hours of observation, Chandra saw 29 individual X-ray photons coming from this one object: a remarkably large number. Over a second six-hour observation window, it discovered another 10 X-ray photons. Those two observations, taken nearly a year after the initial explosion occurred, indicate a number of remarkable facts:

Even with all of this, we have to lament what we’re lacking: the ability to monitor events like this continuously, across the sky, in a variety of wavelengths, with high resolution. We only have a series of measurements of its optical brightness at low resolution and low sensitivity, as the drawback of large-area transient surveys is that it trades sensitivity and resolution for speed. We have no X-ray data from the initial brightening, as we only happened to observe this region some 35 to 37 days after the initial brightness peaked, and we don’t have data in between the SRG observation and the Chandra X-ray observations: a gap of nearly 300 days.

We know that the X-ray emissions have dropped off but we don’t know how they decayed. We know that there was both hydrogen and helium in the AT2018cow event but we don’t know whether hydrogen and helium were present or absent in this one, as it’s already too late to make those critical follow-up observations. And we don’t know whether the substantial, record-breaking X-ray emissions that were first seen by SRG — again, more than a month after the optical brightness peaked — actually represents the true peak of emissions or was truly an even brighter event than we were able to observe.

At the end of the day, this newfound object seems to raise more questions than it answers. In Yao’s own words:

“When I saw the Chandra data, I didn’t believe the analysis at first. I reran the analysis several times. This is the brightest Cow supernova seen to date in X-rays. […] In Cow-like events, we still don’t know why the central engine is so active, but it probably has something to do with the type of the progenitor star being different from normal explosions.”

Normally, when stars are on the path to going supernova, they expel large amounts of material and then, when the core implodes, the injected energy has to propagate through that material, shocking it, rebounding, etc., delaying the arrival of the initial light by hours. But with these FBOTs, or Cow-like events, the central cores of those ripped-apart stars are rapidly exposed with the surrounding debris cleared away. Nobody knows why. They’re only found in star-forming regions around dwarf galaxies and we don’t understand why that’s the case. And even though AT2020mrf looks very similar to the original Cow, AT2018cow, in optical wavelengths, it’s scores to hundreds of times intrinsically brighter in the X-rays.

Whatever the resolution to this puzzle is, the only way we’ll uncover it is by discovering and more thoroughly examining even more of these events. With more advanced all-sky X-ray surveys on the way, our best bet, as always, is by conducting a more comprehensive suite of scientific investigations. That’s the only way we can truly, reliably learn precisely what’s out there in the Universe. 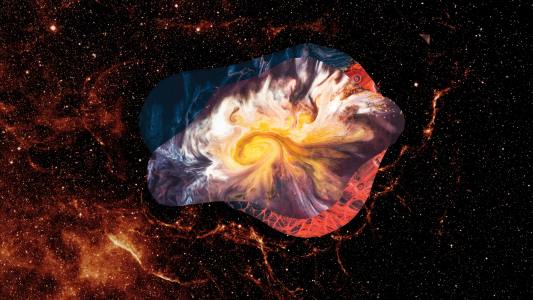 A new study explains where the mysterious “Chinese supernova” went after disappearing from the night sky more than 800 years ago.