A Northwestern University-led team of scientists has developed the most realistic, highest-resolution 3D simulation of star formation ever created.

“This new simulation will help us directly address fundamental questions we could not definitively answer before,” senior author Claude-André Faucher-Giguère said in a press release.

Why it matters: Stars play a central role in our universe — they lead to the creation of planets and produce the elements needed for life as we know it. Anything new we can learn about them can lead to new insights into everything else.

The challenge: It takes tens of millions of years for stars to form, so we can’t directly observe the entire process — and what we can see isn’t terribly useful.

“When we observe stars forming in any given region, all we see are star formation sites frozen in time,” Grudić said. “Stars also form in clouds of dust, so they are mostly hidden.”

That limits our ability to solve lingering mysteries surrounding star formation, such as what determines a star’s mass and why they tend to form in clusters.

STARFORGE: Since studying star formation in space is so challenging, scientists have taken to studying it through computer simulations, writing programs that model the process on an accelerated time frame.

This new simulation, STARFORGE (Star Formation in Gaseous Environments), is a major advance over its predecessors — it simulates an area 100 times more massive and incorporates more of the processes involved in the birth of a star.

The team used one of the largest supercomputers in the world, Frontera, to develop STARFORGE, and even it could require up to three months to run a single simulation.

STARFORGE is a quantum leap in technology.

“People have been simulating star formation for a couple decades now, but STARFORGE is a quantum leap in technology,” Grudić said.

“Other models have only been able to simulate a tiny patch of the cloud where stars form — not the entire cloud in high resolution,” he continued. “Without seeing the big picture, we miss a lot of factors that might influence the star’s outcome.”

Paying off: STARFORGE is already expanding our understanding of star formation, leading to new insights into the role of the jets of gas stars emit from their poles soon after their birth.

“Jets disrupt the inflow of gas toward the star,” Grudić said. “They essentially blow away gas that would have ended up in the star and increased its mass.”

“People have suspected this might be happening,” he continued, “but, by simulating the entire system, we have a robust understanding of how it works.” 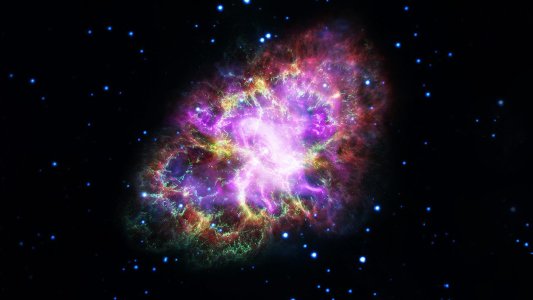 A rare form of plutonium has been discovered on Earth for the first time — and an exploding star appears to have helped it get here.