NASA expected its Parker Solar Probe to reveal new insights into the sun — the craft literally has “solar” in its name.

What it didn’t expect was for Parker to snap a picture of the surface of Venus that may change what we thought we knew about the planet — or possibly the probe itself.

The Parker Solar Probe launched in 2018 with the ambitious mission of getting closer to the sun than any craft before it. From that unprecedented vantage point, it could collect data that would expand our understanding of the star and its impact on Earth.

Rather than giving the probe just one opportunity to collect this data, NASA designed the mission so that Parker would fly by the sun seven times over seven years, using the gravity of Venus to fling itself ever-closer to the star.

In July 2020, Parker swung by Venus for its third gravity assist — and that’s when its imaging instrument, WISPR, snapped a picture of Venus’ surface that NASA wasn’t expecting to see.

The Surface of Venus

On the surface of Venus is a highland region called the Aphrodite Terra where the temperature is about 85 degrees Fahrenheit cooler than the surrounding area.

This Africa-sized region is clearly visible in the new WISPR image. That was surprising because the thick Venusian atmosphere should have prevented the instrument from capturing any photos of Venus’ surface.

“WISPR is tailored and tested for visible light observations,” Angelos Vourlidas, a WISPR project scientist, said in a news release. “We expected to see clouds, but the camera peered right through to the surface.”

One possible explanation for this unexpected image is that WISPR is actually sensitive to infrared light — not just visible light — and captured the heat difference between the Aphrodite Terra and its surroundings on the surface of Venus.

The WISPR team is now conducting lab tests to see whether the instrument is actually sensitive to infrared light. If it is, that could open up new opportunities to observe both the sun and the surface of Venus during the Parker mission.

If it’s not, another explanation for the image is that the probe discovered a previously unknown “window” to peer into the atmosphere of Venus.

In order to find out if that’s the case, NASA instructed the probe to take more photos of Venus on its next flyby, which happened on February 20. Those images won’t make it back to Earth until April, so we’ll have to wait to see what they reveal.

“Either way,” Vourlidas said, “some exciting science opportunities await us.” 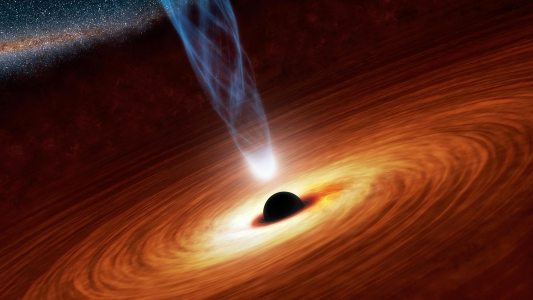 Astronomers used supercomputers and an international network of antennas to create a map of 25,000 supermassive black holes.

Astronomy
See 25,000 supermassive black holes in one map of the sky
By Kristin Houser
Subscribe to Freethink for more great stories
Subscription Center
Sections
Video
Freethink
Subscribe
We focus on solutions: the smartest people, the biggest ideas, and the most ground breaking technology shaping our future.
Subscribe