The internet is about to take over space—at least if Elon Musk and a handful of startup competitors have their way. Musk’s rocket firm SpaceX has bet its future on a satellite-based high-speed internet project known as Starlink, delivered over a “constellation” of 4,500 low-orbit satellites. SpaceX recently secured FCC approval for another 7,500 satellites, potentially allowing a global fleet of up to 12,000.

Meanwhile, the Canadian firm Telesat is planning a similar network using 292 satellites, deploying Alphabet’s Loon software and launched on Jeff Bezos’s Blue Origin rockets. The Japanese-backed startup OneWeb is preparing a 900-satellite constellation, launched primarily on Russian Soyuz rockets, while the Chinese tech firm LinkSure promises to have 272 satellites delivering “free WiFi” by 2026. LeoSat, Kepler Communications have also secured approval for smaller constellations of 78 and 140 satellites each. Dozens of other startups are also racing into the field.

If these companies are successful, they will put more satellites into space over the next ten years than have been launched in the history of spaceflight. According to the UN, humans have launched just 8,378 objects into space, total, since Sputnik in 1957, and there are only 1,957 active satellites currently in use. SpaceX alone will have six times that many.

Space-Internet Is a Really Big Deal

The promise of this service is huge: fiber-level internet speeds delivered from space to literally anywhere on earth. With no expensive telecom infrastructure to build, this could be one of the fastest ways to deliver high-quality internet access to the 3.5 billion people who still aren’t online. The satellite constellations could also provide high-speed internet to ships on the high seas, commercial jets, and other places where infrastructure is difficult or impossible to build.

Old-fashioned satellites are huge (about the size of a school bus) and expensive (typically costing billions of dollars to build and launch). The new satellite networks will rely on a new generation of tiny satellite designs, ranging from SpaceX’s mini-fridge-size designs to the four-inch “grilled cheese sandwiches” the startup Swarm is using. They are easier to build, because they are the first satellites that can be mass-produced, and much cheaper to put into orbit.

The constellations will also fly at extremely low altitudes to increase the speed and reduce the latency of the connection. The traditional satellite internet provider Viasat orbits its bus-sized satellites at a distance of about 35,000 km. SpaceX and the other upstarts, by contrast, are planning to put their constellations in very low-earth orbit, as low as 1,000 or even 350 km above the earth’s surface—a hundredth the distance. This will substantially reduce lag time while devices on the surface beam data to the satellites.

Not only could these networks bring billions of people online for the first time, it could massively disrupt the broadband industry in the developed world, too. Every cable, fiber, and wireless internet provider on earth will have to deal with new competitors circling overhead, and no monopoly will be safe. It’s even possible, depending on how the networks develop, that you won’t even need both a wireless and home internet provider.

Hopefully, that kind of game-changing disruption will lower prices and spur all sorts of new innovation.

The last few months have been rough for SpaceX. In 2015, it had predicted it would have 400 satellites up by the end of 2019. So far, it has just two test satellites online, senior managers have been fired, everything is way behind schedule, and the project is bleeding cash.

In October, Musk abruptly fired seven senior Starlink managers because of delays and rising costs. In November, the company attempted to borrow $750 million but could only secure a third of that, and in December, Musk had to go back to SpaceX investors to raise the remaining $500 million.

Even with the new cash, in January, SpaceX announced it was cutting 10% of its workforce. On Wednesday, Musk told investors that two “absolutely insane” projects—a Mars rocket and Starlink—were going to “bankrupt the company,” so “SpaceX has to be incredibly Spartan with expenditures until those programs reach fruition.”

But unless Starlink does reach fruition, the future of the company could be in jeopardy. Starlink was originally supposed to have 40 million subscribers and $30 billion in revenue by 2025—about six times more revenue than the rocket side of the company. Given that its rocket business is also well-behind expectations, launching only half as many rockets in 2018 as originally projected, it’s clear that SpaceX really needs the revenue stream.

But, as recently as October, SpaceX sources were telling Reuters that their mid-2019 goal for launching the first operational satellites was still “pretty much on target,” so we’ll have to wait and see.

Space and Rocket Fuel Are… Tricky

Musk, as usual, is the most ambitious player in this industry, but he’s far from alone in running into trouble with space internet. Back in 2016, Facebook was just about to launch a satellite to deliver internet to regions of sub-Saharan Africa, but the plan hit a snag when the SpaceX rocket that was carrying it exploded on the launchpad. (Facebook is also cautiously planning to try again in 2019.)

OneWeb, backed by the Japanese conglomerate Softbank, was supposed to launch its first six satellites back in November, but their launch has been delayed repeatedly. Last Wednesday, a crack was discovered in the Russian Soyuz rocket that was supposed to carry them to low-earth orbit, likely delaying its latest mid-February timetable. Given that at least 600 of its 900 satellites are supposed to go up on these rockets, reliability is a concern.

There are also a bunch of technical challenges with low-earth orbits, too. The orbits will decay faster, so the satellites have to be replaced every few years. That ain’t cheap, even you’ve got your own rocket company. These extremely low satellites also can’t “stay still” in a geosynchronous orbit—they have to fly around the earth, or else they’ll fall out of the sky. That means they’ll constantly be zipping out of range, and that’s why you need a huge network of them, so there’s always one overhead.

They also have to be able beam data to each other, bouncing it across dozens or hundreds of satellites and down to wherever it’s going. That’s a hugely complex engineering and software challenge that hasn’t yet been done in practice.

The Dinosaurs Aren’t Dead Yet

So when can you expect to start enjoying truly seamless, global, high-speed space internet? SpaceX still hopes to have a bunch of satellites up by the end of this year, but it will likely be years before anyone (let alone residential customers) will be able to access that network. Telesat is aiming to be operational in 2022, but it’s focused on corporate clients—airlines, governments, remote hospitals, maritime ships, and backend data for cell phone companies.

Swarm’s tiny sandwich-satellites are too small for high-speed data, so they’ll be focusing on low-bandwidth services, like SMS messaging for cell phones that are out of tower range, GPS tracking for shipping containers, and emergency roadside assistance for vehicles.

Assuming its Russian rockets hold together, OpenWeb plans to launch about 30 satellites a month, beginning later this year, with testing and demos throughout 2020, and “full twenty-four-hour global coverage beginning in 2021.”

But the traditional satellite internet providers aren’t taking this all lying down, either. In 2019, Viasat will launch a huge new satellite (Viasat-3) that will cover all of North and South America and, it says, have more network capacity than every communications satellite combined. In the next two years, it also plans to launch one over Europe and Africa, and another one over Asia, becoming the first truly global internet provider.

These satellites will not only massively upgrade in-flight internet (if you’ve flown JetBlue, you’ve probably used Viasat internet), but they promise to deliver high-speed internet to residential customers, too.

Regardless of who wins this race, the space internet revolution is happening, and it will be streamed—in 4K. 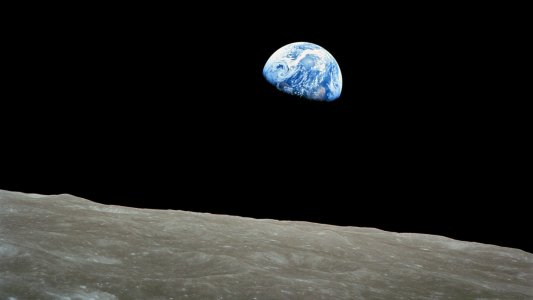 The Israeli group’s moon mission will be ride-sharing on a SpaceX rocket.

Outer Space
The first private moonshot is ready to launch
Subscribe to Freethink for more great stories
Subscription Center
Sections
Video
Freethink
Subscribe
We focus on solutions: the smartest people, the biggest ideas, and the most ground breaking technology shaping our future.
Subscribe