New evidence has emerged that volcanoes on Mars may have erupted as recently as 50,000 years ago — and not 3 million years ago, as previously thought.

Volcanic deposits: During a volcanic eruption, hot, liquid magma escapes through cracks or holes in the surface, becoming lava. It then flows over the surface, solidifying into rock as it cools.

All the cooled lava, ash, and other material left behind on the surface after an eruption is called the volcanic deposit.

The discovery: While looking at satellite images of Mars, researchers at the University of Arizona and the Planetary Science Institute spotted what appears to be a previously unknown volcanic deposit surrounding a 20-mile-long crack in the planet’s surface.

From those counts, they estimated that the volcanic eruption may have taken place in the past 50,000 years.

“This may be the youngest volcanic deposit yet documented on Mars,” lead study author David Horvath said in a press release. “If we were to compress Mars’ geologic history into a single day, this would have occurred in the very last second.”

Why it matters: Volcanic activity probably played a key role in the evolution of life on Earth. If volcanoes on Mars were erupting just 50,000 years ago, it raises the possibility that the planet may still have harbored enough geologic heat near the surface to support life.

“The interaction of ascending magma and the icy substrate of this region could have provided favorable conditions for microbial life fairly recently and raises the possibility of extant life in this region,” Horvath speculated.

I think we can rest assured that it won’t be the last volcanic eruption on Mars.

It is possible that what the researchers believe is a volcanic deposit is actually dust and sand that the Martian wind blew out of the crack. However, they don’t think that’s likely, based on how the wind blows on the Red Planet and the placement of the material around the opening.

More to come: The new volcanic deposit is located in the Cerberus Fossae region of Mars, which is believed to be the site of the most recent water floods on Mars (those occurred about 20 million years ago).

It’s also the same part of the planet where NASA recently detected two Marsquakes, suggesting that the region might still be geologically active.

“This may be the most recent volcanic eruption on Mars,” study co-author Jeff Andrews-Hanna said, “but I think we can rest assured that it won’t be the last.” 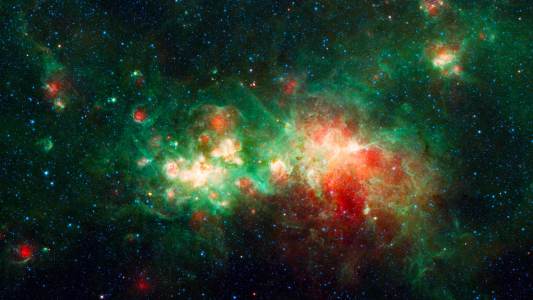