In March, a self-driving Uber hit a pedestrian in Arizona, resulting in the first known fatality from an autonomous vehicle. After a two-month investigation, the National Transportation Safety Board (NTSB) has released a four-page preliminary report on the accident.

The report confirms that the vehicle’s sensors detected the pedestrian and her bicycle a full six seconds before impact, but Uber’s software did not automatically brake or notify the driver of the imminent collision.

The report adds some depth to the story, but it does not resolve fundamental questions about why the crash happened and who was responsible.

Records from the self-driving computer show that the car’s radar and LIDAR systems were working fine: everything was functioning, and no errors were detected. The sensors picked up the pedestrian “about six seconds” before impact — more than enough time to avoid a crash.

However, the software didn’t recognize what the sensors were detecting, first “(classifying) the pedestrian as an unknown object, as a vehicle, and then as a bicycle.” The software also struggled to understand that the moving object was simply crossing the road, from left to right, predicting “varying expectations of future travel path.”

Nonetheless, at 25 meters away (about 1.3 seconds before the crash), the computer decided that emergency braking was necessary to “mitigate a collision.”

And here’s where it gets weird: “According to Uber, emergency braking maneuvers are not enabled while the vehicle is under computer control, to reduce the potential for erratic vehicle behavior. The vehicle operator is relied on to intervene and take action. The system is not designed to alert the operator. … The data also showed that all aspects of the self-driving system were operating normally at the time of the crash, and that there were no faults or diagnostic messages.”

Unfortunately, the backup driver did not take the wheel until less than a second before the collision. Video from inside the car showed that she was looking down for several seconds before the crash, but she told investigators that she was monitoring the car’s computer on the iPad installed in the center console, not looking at her phone.

There is no particular reason to doubt this, as Uber says that “the operator is (also) responsible for monitoring diagnostic messages … and tagging events of interest for subsequent review.”

The report had nothing new to say about the pedestrian herself: she was crossing outside of a crosswalk and wearing dark clothes. Toxicology tests were positive for methamphetamine and cannabis, but it’s not clear that she was under the influence at the time she was crossing the street.

So Wait, What Happened?

The preliminary report is barely three and a half pages, and the NTSB won’t officially decide the “probable cause” until they complete their investigation. But the little that’s in there just adds to the confusion.

The NTSB flatly states that Uber’s self-driving system does not have an emergency braking maneuver, even though the software does determine if emergency braking is needed to avoid a crash. Nor is the computer programmed to warn the backup driver about possible collisions.

This is astonishing, if true.

The car itself (a new Volvo SUV) came already equipped with a “driver assistance program” that warns drivers about likely collisions and automatically brakes if the driver does not take control in time.

One conclusion seems inescapable: if the Volvo’s system had been engaged, or if the car had hit the brakes when Uber’s software decided it should, the pedestrian would likely still be alive.

Road tests for this model of Volvo show that its braking power could have slowed the Uber from roughly 40 mph to between 14-18 mph in 1.3 seconds. That would have cut the risk of death for a pedestrian hit at those speeds from around 50% to less than 5%.

By that point, the pedestrian might have been across the lane, and the car would have been near a dead stop. (Feel free to check my math, but I assume it is essentially the same calculation that the car’s software must have done to decide it needed to emergency brake at 25 meters.)

“All aspects of the self-driving system were operating normally at the time of the crash.”

Not a Good Look

So we know: (1) the software did not glitch and was operating normally; (2) the sensors picked up the pedestrian in time; and (3) the computer correctly calculated when emergency braking was necessary.

The only puzzle is why Uber turned off its emergency braking system in the first place. Uber’s cryptic comment that it was disabled “to reduce the potential for erratic vehicle behavior” is troubling. It implies that Uber’s collision avoidance program has so many false positives that its “erratic” stopping prevents it from being used out on the roads.

Even harder to understand is why the system wouldn’t be designed to alert the backup driver to potential collisions. The way the NTSB describes this “fully autonomous” software makes it sound more primitive than the driver-assistance features that many ordinary cars have had for years.

We still have to wait for the complete investigation, and more detail might help explain what was left unsaid in these preliminary findings. But the bad news for Uber here might be good news for driverless technology as a whole.

In 2018, these seem like simple things to add to a self-driving system, and they’re in widespread use in millions of ordinary cars without triggering much “erratic” behavior. Time will tell how safe driverless cars can become, but this crash doesn’t look like it raises fundamental concerns about the technology as a whole. 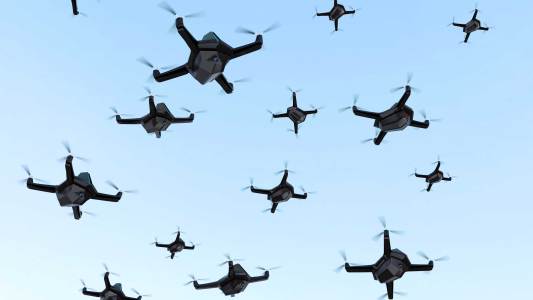 A new kind of radar could direct drone traffic safely around city skies.

Transportation
Researchers want to create a traffic cop for the sky
Subscribe to Freethink for more great stories
Subscription Center
Challenges
Video
Freethink
Subscribe
We focus on solutions: the smartest people, the biggest ideas, and the most ground breaking technology shaping our future.
Subscribe