Editor’s note, 6/28/21, 3:35 PM: The article was updated to clarify that Natrium features a sodium‐cooled fast reactor and not a type of molten salt reactor, as previously reported.

A nuclear power startup founded by Bill Gates has announced plans to build a new kind of nuclear reactor at a retiring coal plant in Wyoming.

This reactor will be the first real-world demonstration of the startup’s technology, which could help power the world — without warming the climate.

Nuclear power: Splitting atoms (known as nuclear fission) produces heat. At most nuclear power plants, that heat is used to boil water, which produces steam. The steam then spins a giant turbine to create electricity.

Nuclear power is reliable, cost-effective, and doesn’t produce any climate-harming carbon emissions. It’s been used in the U.S. for decades, and today, nuclear power plants generate about 20% of the nation’s electricity.

The challenge: The average lifespan of a nuclear power plant is 35 years, and most of the plants in the U.S. were built between the 1970s and ’90s.

New facilities aren’t being built at the same pace old ones are retiring, though, because getting projects approved isn’t easy — nuclear power plants today tend to be massive facilities that cost $10 billion and take several years to build.

Why it matters: If another form of clean energy doesn’t fill the gap left by those old nuclear power plants, carbon-emitting sources, such as natural gas or coal, might.

Wind and solar are options, but nuclear power is more reliable and takes up less physical space. TerraPower has designed a new kind of nuclear reactor that could be built more quickly and cheaply than traditional plants.

The plant will serve as the first demonstration project for TerraPower’s tech.

The idea: TerraPower calls its technology Natrium, and it features a sodium-cooled fast reactor, which uses liquid salt as a coolant instead of water. The heat the plant produces is trapped in molten salt, which is stored in a giant tank.

That heat can then be tapped to spin a turbine and generate electricity whenever needed — it doesn’t have to be used right away if another source of cheaper or cleaner energy, such as solar or wind, is already meeting the grid’s demand.

The next steps: On June 2, TerraPower announced that it would be building its first Natrium reactor at the site of a retiring coal plant in Wyoming. This fully functioning plant will serve as the first demonstration project for the startup’s tech.

It’s not clear how long the plant will take to build. However, TerraPower is expected to decide on a final site by the end of 2021 and have the plant operational before the end of the decade, so it seems eight years would be the maximum.

The exact cost to build the nuclear reactor is also unknown — Reuters says $1 billion; Gates told GeekWire $4 billion in February — but even the higher estimate is 60% less than traditional plants.

TerraPower’s reactor will produce about 60% less power, too — 345 MW compared to the 1 GW average of traditional plants — but the smaller size and lower capital cost could make building new reactors seem less daunting, perhaps spurring the construction of more nuclear power plants in the U.S. 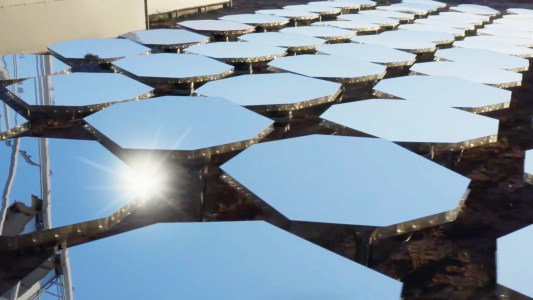 If adopted globally, concentrated solar power could make major waves in manufacturing, not to mention prevent wars over oil and mitigate climate change.

Series | Hard Reset
How mirrors could power the planet… and prevent wars09:28
Subscribe to Freethink for more great stories
Subscription Center
Challenges
Video
Freethink
Subscribe
We focus on solutions: the smartest people, the biggest ideas, and the most ground breaking technology shaping our future.
Subscribe