We may believe that the truth will set us free. But what if rationality and logic backfire? This is the argument of Shankar Vedantam, science journalist and host of The Hidden Brain podcast, in his latest book: Useful Delusions: The Power and Paradox of the Self-Deceiving Brain.

Since then, Vedantam has “become a little bit more cautious about our ability to actually pull off many of those things in actual practice.” Human beings encounter a range of difficult situations in which “logic and rationality are often not the best (approaches),” he says, and can sometimes even add to our pain.

Vedantam acknowledges that self-deception can harm us. But it often has hidden benefits, he argues. Believing our partner is wonderful will actually make us more satisfied in our relationship, for instance, and thinking we are healthy (when sick) can improve our odds of recovering from illness.

I spoke to Vedantam about the evolutionary benefits of self-deception and why writing this book was a “slap in the face.” Here is our conversation, edited and condensed for clarity.

All of us should ask, ‘How can I get that self-deception to work for me while also being vigilant to the ways in which it could be bad for me?’

I’m not sure I can say, “This is the point at which self-deception is good and beyond this it’s bad.” It really is context-dependent and it’s person-dependent. All of us should ask, “How can I get that self-deception to work for me while also being vigilant to the ways in which it could be bad for me?”

You mentioned rituals in the book — can you explain the benefits of these? Does this mean that people are even unconsciously doing things that are going to help them out in the long run?

When it comes to rituals, is it possible there are some rituals that are comforting, that help us basically do things better? Absolutely. Just watch any sports game, why is it that before basketball players take free throws, they basically go through the ritual and emotions of things that they had done 2000 times in the past?

They will tell you, “Well, this is my habit, this is how I basically prepare,” but part of what they’re doing is establishing psychologically a feeling of control over a situation that actually has limited control or a situation in which they experience uncertainty or doubt. The ritual provides them a certain element of comfort.

Psychological experiments demonstrate exactly the same thing, which is that when you give people a sense of uncertainty, you place them in situations where they feel like they have less control, their movements and actions are more likely to mimic what rituals look like. They become repetitive. There are various rituals involving cleansing and cleaning that people resort to when they’re experiencing moments of uncertainty. In all these cases, the rituals are playing a psychologically salutary role, helping us get psychological control of a difficult situation.

From an evolutionary perspective, is there any evidence that deceiving ourselves would be good for our own survival?

Yes, I think there are lots of examples if that’s the case. In fact, when you think about it, the whole system of evolution is really not designed with our personal well-being in mind. This is an idea that goes back to Richard Dawkins in The Selfish Gene from 50 years ago, which is that the thing that evolution is preserving is the genetic information that is basically contained within our individual bodies.

Individuals come and go, species come into existence and they go extinct, but there has been a single unbroken line of genetic information that has basically persisted through all of evolution, through billions of years of evolution.

The simplest example all around us that’s so self-evidently true is the way it changes our relationship to our children. Once you become a parent, you have a delusion that allows you to basically deal with all manner of challenges and difficulties, including if called upon to actually put your own life on the line in order to protect your child’s life.

Returning to mental health might actually involve some amount of delusional belief.

From a rational point of view, you could say, “Well, how does it make sense for you to allow yourself to die so your child can live?” But, of course, from the point of view of evolution and natural selection, that’s exactly what you would want because the goal of evolution and natural selection is not to save you, but to save your genetic information, transmitted through your children.

Parents might say, “of course, that’s not true” — but at some level, being a parent does require that kind of delusional belief in the importance and value of your own child. You can see very obviously from the point of view of natural selection why that could be extremely functional.

What is the relationship between self-delusion and mental health? Is seeing the world accurately always beneficial?

The truth is that, separate from COVID, all our lives are circumscribed by very limited options and possibilities. At a certain point, all of us know that we’re going to die and those thoughts can produce great fear and existential dread. The way we avoid that is that we distract ourselves with all manner of different things. We have vocations, and hobbies, and friends, and entertainment, and Netflix, and hanging out at parties. All these things are designed to distract us from what might be a more accurate view of life.

During the last year, with COVID and political upheaval, how can we balance having an understanding of what’s going on in the world and also not risk burnout?

You have in very dire situations, like wartime, or disaster situations, gallows humor. It’s a mechanism of protecting the mind from dealing with something that is almost unbearable.

I’ve come to acknowledge all the ways in which logic and rationality might actually be limited in my own life.

This is profoundly healthy. In other words, if you’re plugged into the news and into your social media streams 24 hours a day seven days a week, it’s probably really badly upgraded.

Again, this is not to say that people (should put) their heads in the sand and you recommend that people not be aware of what’s going on in the world, but periodically dipping out of the world and looking away from the horrors of the world are part of how all of us in some ways gather ourselves and restore some element of mental health. It actually gives us the power to then step back into the fray and try to do something.

One area where self-deception can be beneficial is when people are sick — people who are more aware of their illness fare worse, actually than the people who are in some denial about it, right?

Being sick actually involves two separate things happening at the same time. The first is actually the biological experience of illness. You’ve broken your ankle or you have a virus inside you or a bacterial infection. Then you have all of the biological consequences of what it means to be sick.

You also have your own perceptions of what it means to be sick and what it feels like to be sick. The fear and unhappiness that you feel when you are sick, the questions that arise in your mind, “Why did this happen to me and not someone else? Why did I have the misfortune of being at this intersection at this time when the car came by and ran a red light and hit me?” All of these questions, in some ways, compound the suffering the illness produced inside us.

A number of studies have found that why the placebo effect works in medicine is that so much of what the placebo effect is addressing is, it might not be changing the biological fundamentals of what’s happening in the body, but it’s doing things that can affect and change your own description and perception of what it is that you’re going through.

If you are going through an illness and you feel -— on top of whatever you feel in terms of sickness — very lonely and very frightened and anxious, that’s going to make it even worse than anything that you are experiencing biologically.

If you could relieve some of those things, whether through delusion, or through superstition, or  ritual, or the placebo effect, you actually make it more likely that you will experience the illness itself as being milder than it would have otherwise.

What was the most interesting thing you discovered, personally, in doing this research?

This is a very surprising book that someone like me would write, because I am a deeply rational and logical person, and if you ask me, “What kind of a world would you want to live in?” I would say I want to live in a world where everything operates according to logical and rational outcomes. When I disagree with someone, I often believe the way to solve that problem is to present a logical argument to them.

Writing this whole book, in some ways, has been a personal slap in the face, because I’ve come to acknowledge all the ways in which logic and rationality might actually be limited in my own life.

The old joke in psychology, which is that psychologists don’t do research, they do “me-search” —  to some extent, that’s true of myself. Part of this book, the critique of logic and rationality, is a critique of myself and the ways in which I find that those things which come so naturally to me are, in fact, often ineffective when it comes to dealing adequately with the world. 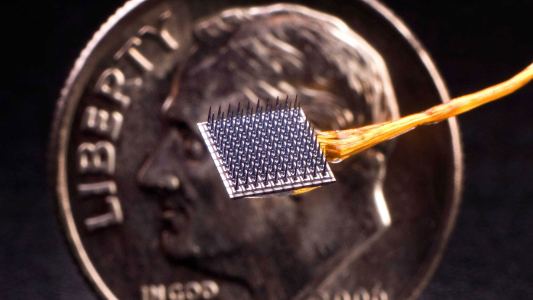 A new brain-computer interface translated a paralyzed man’s “mental handwriting” into text on a computer screen.