A new brain-computer interface allowed a paralyzed man to type on a computer screen by imagining himself handwriting each letter — and his “typing” speed was twice as fast as other brain implants.

The challenge: Brain-computer interfaces are systems that translate brain activity into commands for computers or other machines.

People with paralysis can control prosthetics or even their own limbs just by thinking about moving them with these systems. To type, they can think about moving a cursor and clicking letters on an on-screen keyboard.

The problem with that point-and-click approach to mind-controlled typing is that it’s very slow — the speed record for typing with such a system is about 40 characters per minute.

For comparison, this entire sentence is 54 characters. The average person can type about 200 characters per minute.

The idea: For their new brain-computer interface, neuroscientists with the BrainGate research collaborative eliminated the on-screen keyboard and focused on handwriting.

They implanted two tiny electrode arrays in the brain of a man paralyzed from the neck down. Those electrodes were placed specifically in the part of the brain that became active when he thought about moving his hand and arm.

To train the system, the man was asked to think about handwriting 26 lowercase letters and a few punctuation marks as they appeared on a screen in front of him. The brain implant then transmitted the signals to a computer via a cord.

Once an algorithm on the computer learned what patterns of signals to expect for each character, the man could just think about handwriting a letter or punctuation mark, and the system would type it on the computer screen.

“We can determine if the letter you wrote is an A or a B or a C and then plop that up on the screen, and you’re able to spell out words and sentences and so forth one letter at a time,” study co-author Krishna Shenoy of Stanford University told NPR.

The results: Using the new brain-computer interface, the man was able to type at a speed of about 90 characters per minute — more than double that of other brain-to-text systems — with 95% accuracy.

That’s still far slower than the average person types, but it is approaching the texting speed of seniors, who manage to type out about 115 characters per minute on their phones.

“This method is a marked improvement over existing communication (brain-computer interfaces) that rely on using the brain to move a cursor to ‘type’ words on a screen,” lead author Frank Willett of Stanford University said in a press release.

“Attempting to write each letter produces a unique pattern of activity in the brain, making it easier for the computer to identify what is being written with much greater accuracy and speed.”

The cold water: So far, the new brain-computer interface has only been tested on one person, so we don’t know if others would have the same success with the system.

Future trials are in the works, though, including some with people who aren’t paralyzed, but who have lost the ability to speak (and type) due to conditions such as ALS.

The researchers also want to increase the number characters the system can interpret, adding capital letters and numbers to its repertoire, for example.

Why it matters: The new brain-computer interface is still just a proof of concept, but if the researchers are able to fully develop the device, it could be life-changing for millions of people who’ve lost the ability to move or speak.

“Communication is central to how we function in society,” Debara L. Tucci, director of the NIDCD, which helped fund the study, said.

“In today’s world of internet-based communication, people with severe speech and physical impairments can face significant communication barriers and, potentially, isolation,” she continued. “We hope these findings will encourage commercial development of this latest (brain-computer interface) technology.” 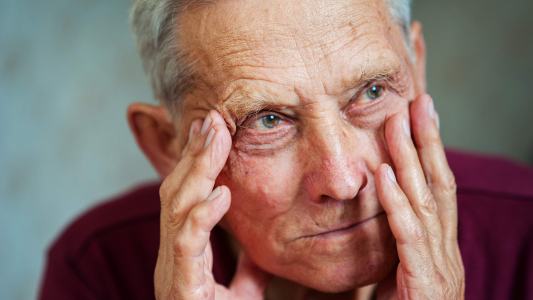 A study has identified four distinct types of Alzheimer’s disease, based on how the tau protein spreads in patients’ brains.