In the wake of the George Floyd protests, activists across the country are calling for police budgets to be reexamined, reduced, or moved into other programs. Some just want police priorities changed, while others argue that policing is actually under-supplied in poor communities. Others, quite simply, want to defund the police entirely.

But what if activists want to take their voice from the streets into the meeting rooms where elected officials actually make critical police budget decisions?

Well, now they can. Reinvestin.us aims to get more citizens engaged in the local decision-making process by posting exactly when and how, in an easy-to-understand online calendar.

For example, on July 8, the site posted a San Francisco meeting of the Budget and Appropriations Committee of the Board of Supervisors — detailing what is on the agenda, how to call in to comment, and providing a link to attend the meeting virtually.

But, if you look for the same information on the city’s Budget and Appropriations Committee website — well, three clicks in and I still can’t find the meeting (even though I found a calendar of meetings…go figure).

Jane Kim, a civil rights attorney, and the website’s leader says my experience isn’t uncommon. Police budget meetings can be hard to find and difficult to understand — laden with bureaucratic jargon.

“I’ve seen it from my personal experience that the meetings where relevant budget decisions are made are often under-attended, hard to locate, awkwardly timed, and we know that there are a lot of barriers to attendance,” she told Fast Company.

At its launch on June 23, the site covered cities in California. When a video surfaced showing bodycam footage of Carlos Ingram-Lopez’s, who was killed by police in Tuscan, Arizona, the site expanded to include police funding meetings in Tuscan. They hope to continue to expand to other cities. Kim tweeted that people can email to request their city be added to the site.

Cries to “defund the police” are being heard nationwide, although it isn’t exactly clear what that means in practice. But if people want their hard-earned taxpayer dollars reallocated toward the issues and efforts they find most important, the elected officials need to hear it — at the right time, in the right place, so police budgets voted on by elected officials reflect the public’s values.

Social Entrepreneurs
How to build an inclusive economy
6:59
In partnership with Skoll Foundation
Our economy was designed to exclude and exploit people of color. These entrepreneurs are working to level the scales.
By Stephen Johnson

Entrepreneurs
Could Gen Z close the racial wealth gap through entrepreneurship?
5:14
In partnership with Ewing Marion Kauffman Foundation
This American city was ranked one of the worst for the success of black-owned businesses. Can these young entrepreneurs change that?
By Stephen Johnson

Fixing Justice
It’s not enough to remove "bad apples" from police forces
Police use of force complaints would not dramatically decrease if “bad apples” were fired early in their careers, Princeton and UPenn researchers predict.
By Kristin Houser
Up Next 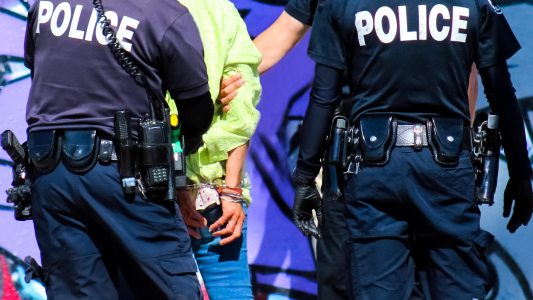 Thousands of volunteers are data scraping public websites to compile police records into a single national database for researchers to mine.