Each incident follows a predictable pattern: a man Ashley Bergeron encounters frequently could be ripping siding off a house, smashing in windows, or wielding a bat.

As a Maplewood police officer, Bergeron says it is the kind of scene that would make most officers think that they are “going to have to go hands-on and use force.”

But Bergeron has a different approach.

“You have to go into it knowing this person is able to react positively,” she says. “I know how to get them the help they need and to get them calmed down.”

That’s because Bergeron is on a special unit — the Maplewood mental health unit. It is a team of police and paramedics who have training in crisis intervention and mental health issues, including bias, cultural awareness, mental health services, and how to effectively resolve problems and communicate with people who have these issues.

The team has a crystal-ball approach. Instead of waiting for a crisis to happen and the phone to ring, they proactively reach out to people they think will make these calls — people who exhibit mental illness signs and make frequent calls to 911. The idea is to reach these regular 911 callers before a crisis ensues, so they can preemptively thwart a problem.

You have to go into it knowing this person is able to react positively. I know how to get them the help they need and to get them calmed down.

“We look for high utilizers (of emergency services) and people that need services that aren’t receiving them. And then we go out into the community and work with them to ensure that they’re able to access those services and to provide short-term care for them,” says police sergeant Mike Dugas.

Dugas says that some people with mental health issues, or their families, can call 911 many times each week in a state of panic or crisis. When police respond, they often have to manage a problem that would more likely be alleviated with therapy, medication, mental health services, or other proactive steps. Sometimes, just seeing an officer in uniform can escalate a situation, so Bergeron and other members of the mental health unit often wear a casual uniform and don’t carry their weapon as they approach a person in crisis.

People with a mental illness are overrepresented in prisons and jails. According to the National Alliance on Mental Illness, 15% of men and 30% of women in jail have a severe mental health condition. And time spent incarcerated can exacerbate it.

Jail time can disrupt their medication schedule. It can separate them from caregivers or social workers, leaving them without appropriate help. Many times, their condition worsens. People jailed with a mental illness will also stay locked up longer, on average, for the same offense than someone without a mental illness.

The team hopes that Maplewood’s program will reduce the number of 911 calls and arrests, provide help to people in need, and improve community welfare.

One of Bergeron’s tasks is reconnecting the individuals she meets with mental health services, like social workers or care providers they have lost touch with. Other times, Bergeron checks in to encourage people with a mental illness to continue medication, therapy, or classes to manage their condition. Some people have become so familiar with Bergeron that she can deescalate the situation over the phone, without sending the police over. But whether in-person or over the phone, encounters with the mental health unit are calmer than a 911 call.

The Time Is Right for Improved Mental Health Services

The police killing of George Floyd triggered a national backlash. Protestors hit the streets with cries to defund the police, end police brutality against black people, and provide better mental health services. In response, communities across the country started exploring alternative law enforcement approaches and looking to existing examples. One example that drew attention is Eugene, Oregon’s, CAHOOTS (Crisis And Help Out On The Streets) program. The 30-year mental health unit responds to crises by providing counseling or connecting people with service providers.

Sheryl Kubiak, a social worker and Dean and Professor of the Wayne State University School of Social Work, studies the effectiveness of programs like these that incorporate mental health services, but has not evaluated the Maplewood team. She says that, of the programs she has assessed, the most effective ones have a “boundary spanner” — a person who understands the language that goes across law enforcement and mental health or substance abuse intervention.

“We have seen this over and over, if you put law enforcement and community mental health folks in a room, they start out with a lot of distrust,” she says, “Because they don’t understand the terminology that the other folks use. There has to be at least one person who can act like an interpreter across these different sectors.”

Bergeron, who has a bachelor’s degree in psychology, could serve that role.

“I see how important it is to know about (mental health issues) and acknowledge it, rather than just push it away,” she says. “I could use all my skill sets and my passion and use it for good, not only being as a police officer, but reaching out to people who are suffering from different mental illnesses, like PTSD, depression, or anxiety.”

Kubiak says that the second key ingredient to a successful program is the ability to intervene before a crisis ensues — echoing Maplewood’s proactive mission.

“Once someone gets caught up in a criminal legal system, and they get their fines assessed, or they can’t pay their bail, or they get a ticket in jail, it’s just much harder to get people out of the system. If we can prevent people from going into the system, you save taxpayers a lot of money. We do what’s best for their mental health, and we do what’s best for their families and our community,” she says.

Kubiak cautions that people too readily believe that mental health services programs are effective — a claim that shouldn’t be made in the absence of data. She encourages new and innovative programs to have an independent evaluation because “before we replicate something over and over, we need to find out, does it actually work and who does it work for?”

Dugas agrees but acknowledges that the Maplewood team hasn’t conducted a formal audit. Still, based on his observations, he believes they are on the right track.

“I can tell you that we had a patient suffering from mental illness who was creating a large neighborhood disturbance on a regular basis. And since we’ve been able to assist that patient, calls to the neighborhood have dramatically dropped. And in just having interaction and speaking with the neighbors, they’ll tell you how much better the community is,” Dugas says – and he has plenty more stories like that to tell. 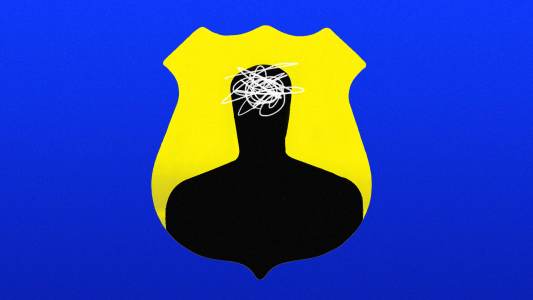 As tensions between law enforcement and the public continue to rise, many are beginning to question whether all 911 calls warrant a visit from armed officers.