In an ocean-spanning effort, researchers from the U.S. Department of Agriculture have fully sequenced and released the genome of the Asian giant hornet.

This first complete genome can help scientists better understand where the hornets came from, which in turn can help identify how many different invasion events there may have been. Knowing their native home can also provide clues to how they may behave in their new one — crucial insights in a search-and-destroy mission.

Since the Asian giant hornet’s arrival in the Pacific Northwest this past spring — armed with a quarter-inch, venom-pumping stinger, guillotine mandibles, and the tabloid-ready “murder hornet” moniker — the race has been on to ensure the hornets do not set up shop in North America, ready to wreak havoc on native species.

A mated queen was found earlier this summer, and according to the Washington State Department of Agriculture (WSDA), a male hornet was caught on July 29 — the seventh hornet found in the U.S., and the first male.

Native to Asia, the massive hornets have a voracious appetite and a brutal sting — like, scalpel-dipped-in-lava brutal — that kills about 50 people a year in Japan. But the real danger isn’t what the hornet can do to humans.

It’s what it may do to our agricultural and ecological systems.

The Asian giant hornet absolutely decimates domestic honey bees. Unlike Asian bees, which have evolved a wickedly metal defense strategy — they lure the hornet into their hive, vibrate like crazy, and basically cook the invader alive — honey bees on this side of the Pacific don’t know what to do with these invaders.

Asian giant hornets will enter a hive, behead the bees by the tens of thousands, and devour their sweet, sweet insides — a whole colony can be killed in dramatic fashion in a matter of hours. Since honey bees pollinate tons of important crops, stopping any future bee massacre is of prime importance.

Asian giant hornets will enter a hive, behead the bees, and devour their sweet insides — a whole colony can be killed in a matter of hours.

Which is why researchers raced to decode the Asian giant hornet’s genome.

“Sequencing the Asian giant hornet genome has been a real pushing-the-envelope sort of project for us,” Anna Childers told WIRED‘s Megan Molteni. Childers is a computational biologist with the USDA’s Agricultural Research Service, which since 2011 has been plugging away at sequencing the genomes of a number of agriculturally relevant arthropods: ticks, beetles, bees, flies, etc. (Currently in the crosshairs: the desert locust, swarms of which are ravaging East Africa.)

The genetic info Ceres was fed came from samples gathered in Canada.

The hornets had first been spotted last summer on Vancouver Island in British Columbia. (The first salvo in the Hornet Wars was fired on that island too, when beekeepers tracked down a hive in Nanaimo and took it out.) Eventually, five of the hornets ended up with University of British Columbia bee researcher Leonard Foster.

This first complete genome can help scientists better understand where the hornets came from — and how they may behave in their new home.

Leonard’s samples made their way across the Pacific to Hilo, Hawaii. There, USDA researchers diced up the DNA and attached molecular markers for a genetics lab in Nebraska to use to read the code. That code, Molteni reports, was then crunched by Ceres to form the complete genome.

The researchers released the entire genome, even before setting some data aside to publish before they perish — an unusual speed, Molteni notes, but one which speaks to the urgency of the situation.

“We were trying to make the process of genome sequencing part of a real-time response to an invasive species,” Childers told Molteni. “That would be a real paradigm shift.”

Even a partial Asian giant hornet sequence can help hornet fighters understand the invader’s provenance. Chinese researchers had already completed the sequencing of the hornet’s mitochondrial DNA; shipping samples to Japan for mitochondrial analysis revealed that the Canadian and American hornets had actually come from two different subspecies, from Japan and South Korea, respectively.

This provided an important clue: the Asian giant hornets may have been part of two different invasion events. (It’s not quite that simple though — turns out the South Korean and Japanese hornets have overlapping ranges, so they perhaps got bundled up together.)

Using the genetic sequence to figure out the likely native home of the invading Asian giant hornets, hornet hunters can extrapolate how the hornets may be acting in the Pacific Northwest — and where they might go next.

“It’ll give us additional insights about how that animal behaves in its native range,” Childers told Molteni. “Which will help us better know how to target our efforts here.”

They’ll need all the insights they can get. The Asian giant hornet nests underground, often in dense forest (wait, does the PNW have those?), meaning the best way to spot them is likely via thermal imaging.

Eventually, the genetic sequence may provide even more answers about the Asian giant hornet, Molteni reports. It could reveal the recipe behind their blindingly-painful sting, or help us figure out control measures like chemicals — or a virus. 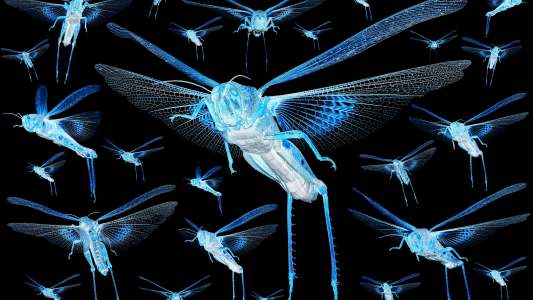 A locust swarm is flying famine, devouring millions of pounds of crops. Researchers have found the swarming trigger — and perhaps an answer to stopping it.