Powered by a whispered, urgent hum, stalking down the alley, extending an arm towards its stinky prey, the trash can, electric garbage trucks are already plying the streets of a few cities, as manufacturers and municipalities seek to transition their sanitation folks to all electric power.

Residents blissfully snooze through it all.

“I twisted the starter switch,” wrote the Wall Street Journal’s Dan Neil of his own test drive. “An indistinct hum came from somewhere, as indicators and switchgear lighted. Ready to go. Foot on the brake, I pushed the yellow air-brake button on the dash — PWWISHH. Selecting D for Drive, I squeezed the go pedal. The 24,500-pound machine surged lightly, confidently, issuing only a soft, voltage-y whine. Attack of the 50-foot golf cart.”

Neil was behind the wheel of Mack’s LR Electric, a greener take on the truck manufacturer’s current, diesel-bellowing best-selling model. The LR Electric is part of a generation of electric garbage trucks; manufactures like BYD, Daimler, Peterbilt, and Lion Electric have their own entrants in the green beast race.

Cities are warming up to the idea, Neil reports; Los Angeles has plans to deploy 1,100 electric garbage trucks, while New York City is aiming for an entirely electric fleet by 2040.

Those electric trucks will be replacing some gas-guzzling monsters. Their diesel engines average 3 miles per gallon, Quartz reports, belching roughly 20 times the carbon emissions of the average American home. They live a rough life, as well, beating themselves up badly as their slow, regular routes — dotted with tons of brake-pad wearing stops — put them right in the sweet spot of what diesel engines don’t do efficiently.

Which is why, while protecting the Earth may be the high-level goal of electric garbage trucks, protecting the bottom line may be why they ultimately catch on.

“While EV trash trucks will be more expensive than conventional trucks, they have the potential to save big on per-mile costs, including energy and maintenance,” Neil wrote.

Electric engines, on the other hand, have no problem with the stop-and-go lifestyle, and the electric motor powered brakes of electric garbage trucks will require far less maintenance, the largest upkeep expense they have, per Neil.

Los Angeles has plans to deploy 1,100 electric garbage trucks, while New York City is aiming for an entirely electric fleet by 2040.

Electric garbage trucks are already on the road. Palo Alto got their hippie hands on one from BYD back in 2017; West Coast waste management firm Recology has already got an electric truck on the road, quietly going about its business in Seattle. As of this past July, Lion Electric’s Lion8 is also being sold to customers, CleanTechnica reports.

CleanTechnica lists some impressive (if self-reported) specs from Lion: zero emissions, no hydraulics (some of the other models still use hydraulics, particularly for the always-awesome loader arms), and projected savings of 80% on energy costs and 60% on maintenance costs.

Perhaps most fascinating to me is the Mack braking system.

As The Drive breaks it down, the LR Electrics will be armed with what are called regenerative brakes. As the truck comes to a stop — which it will do hundreds of times a day, thousands of times a week — the energy generated by stopping is harvested by the brakes. Such energy harvesting systems are already at play in electric passenger and non-electric Formula 1 cars — their energy recovery systems can add over 100 extra horsepower at the driver’s glove tips.

“Within five years you’ll only have electric garbage trucks,” Ian Wright, president of powertrain manufacturer Wrightspeed, told Quartz back in 2016.

He’s not going to hit that prediction, but the rollout may begin in earnest soon; The Drive reports that Mack’s LR Electric orders should be delivered beginning in 2021.

So just hold on, light sleepers; help may be creeping down the alley soon. 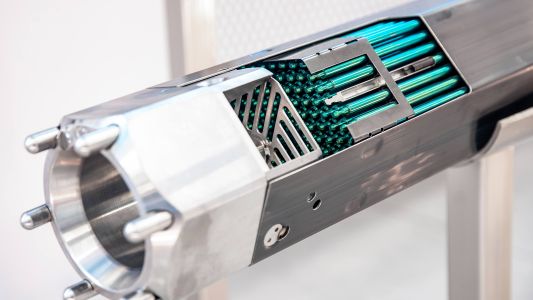 Nuclear power could become more accessible thanks to a new nuclear fuel called ANEEL that combines thorium with uranium.