2020 has actually been good…to the electric aviation industry. Electric planes have gotten bigger, flown farther, and attracted big investors from both the public and private sectors.

Electric aircraft have been around since the 1970s, but due to major hurdles, the idea has mostly been limited to small aircraft, flying short distances, with no passengers — so, not very useful. But recently, thanks to a growing concern about climate change, there’s been a surge of interest in getting electrified commercial aircraft off the ground.

If we can achieve electric commercial aircraft, that would be great news for the environment. Airline travel produces around 2.5% of global carbon dioxide emissions (that’s more than the UK and Australia’s emissions combined!) — and that number is expected to triple by 2050. Planes also emit greenhouse gases at a bad place in the atmosphere. Electric propulsion would eliminate the industry’s direct emissions.

Another potential benefit is cheaper flights. As Quartz reports, half of the flights taken globally are shorter than 500 miles. These short to medium trips are where we’re likely to see the most innovation with electric as well as hybrid aircraft. (Hybrids use a mix of fossil fuels and electric power, switching between the two at key times during the flight.)

Electric planes require fewer parts, less maintenance, and less fuel (power) than traditional planes — all of which could reduce the price of your ticket and make new short-to-medium flight options more feasible for airlines to offer.

Roei Ganzarski, chief executive of the electric motor manufacturer MagniX, told the BBC that a small aircraft will use $400 on conventional fuel for a 100-mile flight — but with electricity, “it’ll be between $8-$12, which means much lower costs per flight-hour.”

In the past five years, we’ve seen electric and hybrid planes make some pretty awesome strides.

Currently, there are about 170 hybrid or electric aircraft projects in development globally.

However, you and I and the 4.5 billion regularly scheduled commercial airline passengers are still a long way from boarding an electric or hybrid plane.

Many experts doubt a commercial electric plane will be available in the next 50 years simply because there haven’t been enough breakthroughs in battery technology — current batteries just are not as powerful, per pound, as jet fuel.

On top of that, batteries are heavy — like jet fuel — but unlike jet fuel, they do not burn off as you use them up. The weight of the battery stays the same, no matter if it’s fully charged or totally dead. But the plane still has to carry it regardless. In fuel-powered jets, the plane gets lighter with the more fuel it burns. This reduces the weight of the aircraft, allowing it to fly further.

Duncan Walker, an aerodynamics lecturer at Loughborough University, did the math. The world’s largest aircraft (the Airbus A380) can fly 600 passengers approximately 9,000 miles in a single flight. But with a battery, he estimates that to keep its current range “the plane would need batteries weighing 30 times more than its current fuel intake, meaning it would never get off the ground.”

These two problems — low power density and constant weight — mean that electric planes are generally small, and flights are generally short, so you won’t get the benefit of spreading costs across several hundred passengers.

Large planes are unlikely to be electrified anytime soon, but that doesn’t mean electric planes have to be too tiny to be useful.

British budget airline EasyJet is working with the US-based Wright Electric to develop a 180-seat fully electric jet with an 800-mile range that could enter commercial service by 2030. The routes are expected to be short and limited — for example, from London to Paris or Amsterdam.

Still, it could have a positive impact on the environment. Roland Berger, a consulting firm, told BBC Future that short-hauls of around 900 miles or less make up about a third of aviation emissions. Even replacing just short-hauls with electric or hybrid planes could make flying greener.

Rolling out a commercial fully electric plane by 2030 is highly ambitious, according to industry experts. We’re much more likely to see commercialized hybrid planes being rolled out by then. 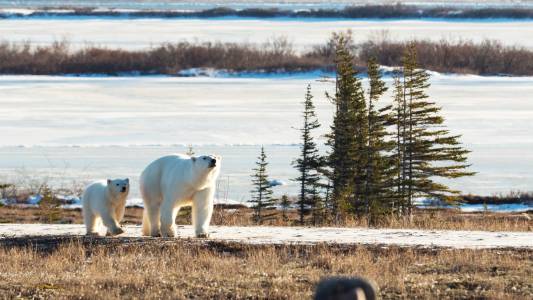 Animals
We need a better way to track polar bears. This father and son found a way.
By B. David Zarley
Subscribe to Freethink for more great stories
Subscription Center
Sections
Video
Freethink
Subscribe
We focus on solutions: the smartest people, the biggest ideas, and the most ground breaking technology shaping our future.
Subscribe