You’d consider  me a hack if I told you  that a father-son team working on new ways of tracking polar bears grew up in White Bear Lake, Minnesota, but that’s some real-life foreshadowing for you.

Jon Kirschhoffer, an advanced research specialist at 3M, a corporation most famously known for the yellow Post-It notes, received a challenge from his son, BJ, director of field operations at Polar Bears International.

“I got the call from him,” Jon says, “and he’s going ‘dad, you work for a company that makes things stick. Can you help us stick a tag to a bear?'”

Most of what we know about polar bears come from tagging them, but the current methods — namely collars and ear tags — have their drawbacks. The bear telemetry is crucial to understanding how they move about their rapidly-melting environment, providing key data for bear conservation and understanding climate change’s impact on the apex predator — and the habitat it lords over.

“As the Arctic continues to warm and sea ice melts, creative and innovative advances in research methods and technology are critical to furthering conservation efforts — for polar bears and for wildlife around the globe,” Krista Wright, Polar Bears International’s executive director, said in a press release.

After two years of work, 3M came up with four creative tag designs to put to the ultimate test: to hitch a ride on polar bears in Western Hudson Bay, high up in the compass-needle-catching northern climes of Canada.

Polar bears reside in a world unfit for human habitation, viciously cold and amorphous. They’re among the most charismatic of megafauna, animate snow banks reaching heights of 5 ft at the shoulders — stretching to 10 on their hind legs — and tipping the scales at over 1,000 pounds. They prowl a literally frozen world which cracks and shifts beneath their paws, devouring anything they can find on the sea ice.

They could spend their whole lives on that sea ice, BJ says, hunting, mating, and even rearing young — if we’d allow them to. But climate change is shrinking their unique environment, pushing polar bear populations into new environments and existential threat.

“It’s a dynamic environment that’s constantly moving, and it’s no place for humans,” BJ  says, beyond taking the necessary trips which have sustained Arctic societies for centuries. This makes studying the bears a difficult proposition.

Most of the location information we have for polar bears in the wild comes from radio collars, BJ says. But those collars have a serious — and hilarious — shortcoming: they can only be fitted to adult females.

“Males have fat necks and little heads, so those radio collars slide off,” BJ says over my laughing at this accurate but slightly disparaging description of one of the planet’s most awesome creatures. And you can’t just collar up a cub, because they grow too fast to do so safely.

That leaves a gaping hole in our understanding: what do male polar bears get up to out on that ice?

Smaller radio tags can be applied as ear tags or implants, but these are invasive procedures and necessitate sticking the bear with something for life — or re-capturing the same bear if you want it back, which, good luck.

But, smaller tags could potentially fit the bill if you could find a way to stick them to a polar bear with the intention of easy detachment.

Polar Bears International posed to Jon and his colleagues their Tag-a-Bear Challenge: develop a way to temporarily attach tracking tags to polar bears that is non-invasive and falls off at a certain point.

The answer to both lay in the bear’s fur.

“I had … an actual polar bear hide that I was able to acquire through the help of Polar Bears International and their organizations to actually do testing,” Jon says. They’d expose designs to cold and saltwater, a “variety of things to simulate the abuses” that a tag would face.

“But we can only go so far in the lab when we need to finally get these on actual bears, and that’s where we’re at now.”

Four designs are currently being tested. One, dubbed “bur-on-fur,” uses what’s basically a bottle brush to entangle the tracker in the bear’s coat, much like a burr hooks to your clothes after a hike. Another mechanical option adapts a clip-like device; a bear-rette, as Jon puts it, if you are — like I am — so inclined.

The third iteration uses an adhesive to stick the tag to the bear’s fur, while the fourth is a combination of approaches, enhancing the mechanical fastening methods with adhesive.

The goal, BJ says, isn’t to necessarily determine one winner, but to assess how the various options work, and those several options could provide a range of choice depending on community and purpose.

Savvy readers will notice that only one half of the challenge has been met thus far. Once you stick a tag to a polar bear’s fur, how do you get it off? 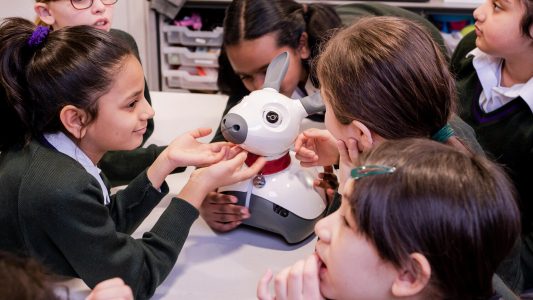 Robotics
The best therapy dog may be a robot
Subscribe to Freethink for more great stories
Subscription Center
Sections
Video
Freethink
Subscribe
We focus on solutions: the smartest people, the biggest ideas, and the most ground breaking technology shaping our future.
Subscribe