It won’t be long before table scraps could be fueling our airplanes.

According to a study published in the Proceedings of the National Academy of Sciences, scientists have devised a method for converting food scraps, animal manure, and used food oil into a type of paraffin that works in jet engines.

The researchers found that they could reduce methane release by diverting food waste from landfills. That, combined with using fewer fossil fuels could result in negative carbon emissions. In total, the new jet fuel may reduce the carbon footprint of jet fuel by 165%.

Net-zero-carbon flights are on the horizon earlier than some might have thought.

This could be a big deal for the parts of the aviation sector, which has pledged to cut carbon emissions in half by 2050. That’s a tall order, given that demand for flights is expected to double by the same year. Since 2009, jet fuel consumption has only risen. It reached an all-time peak of 96 billion gallons in 2019. (In 2020, due to the pandemic, the consumption of jet fuel dropped significantly.)

As a result of the increasing demand for jet fuel, attempts have been made to produce alternative fuels that have a lower environmental impact. Some companies are working on aviation biofuels that depend on vegetable oil, which has dubious environmental credibility, reports Singularity Hub.

Some carbon capture companies are planning to turn carbon pulled from the air back into jet fuel, but that is just theoretical at this point, because of the high cost of sucking CO2 out of the atmosphere.

The latest methods for processing green jet fuel are close to those used to manufacture biodiesel for cars and heavy trucks — using virgin vegetable oils, waste fats, and grease. Currently, it is more cost-effective to convert these into diesel rather than jet fuel, reports BBC.

But the researchers from several institutions, including National Renewable Energy Laboratory (NREL) had a different idea. They looked to “wet wastes,” like food waste, manure, and sewage instead. They estimate that wet waste’s total energy content in the U.S. is approximately equal to 10 billion gallons of jet fuel per year.

In their paper, the researchers describe a way to convert the waste into paraffin by adding extra carbon to the volatile fatty acids (VFAs), which can be upgraded into jet fuel using a catalyst. The resulting paraffin is virtually identical to that found in standard jet fuel. Mixed with a bit of traditional jet fuel, and the resulting fuel meets regulatory standards.

“If our refining pathway is scaled up, it could take as little as a year or two for airlines like Southwest to get the fuel regulatory approvals they need to start using wet waste sustainable aviation fuel in commercial flights,” lead author Derek Vardon said in a press release.

The cost of the new jet fuel isn’t a significant savings. But, taking into account the carbon and methane emissions diverted from the landfill, when the food waste was collected for the fuel, it could make up for it. If there is a fee for carbon or credit for low-carbon fuels, the new fuel could save a lot, reports Ars Technica.

“Net-zero-carbon flights are on the horizon earlier than some might have thought,” Vardon said. 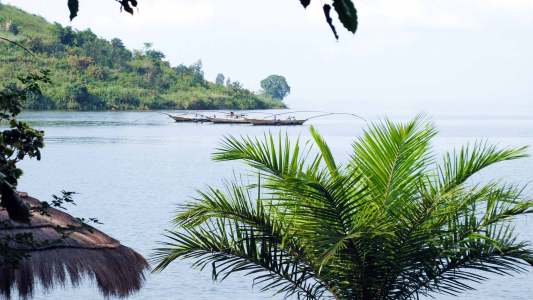 Lake Kivu in central Africa is on the verge of exploding. To prevent disaster, Rwanda is using the lake as a source of energy.

Clean Energy
An explosive lake becomes a source of power
By Teresa Carey
Subscribe to Freethink for more great stories
Subscription Center
Sections
Video
Freethink
Subscribe
We focus on solutions: the smartest people, the biggest ideas, and the most ground breaking technology shaping our future.
Subscribe