In most lakes, surface water is cooled by wind or falling temperatures. Since cool water is denser than hot water, it sinks to the bottom, while warm water rises to the top. This process, called convection, drives the mixing and layering of the water.

But Lake Kivu isn’t like most lakes. Sometimes, it explodes.

Why Is Lake Kivu Dangerous?

Lake Kivu lies on the border between Rwanda and the Democratic Republic of the Congo, in the East African Rift Valley, which is slowly being pulled apart by tectonic forces. This stress results in volcanic activity and hot springs that feed carbon dioxide and methane into the lake’s deepest part, reports Knowable Magazine.

Because of Kivu’s great depth, gasses that usually would bubble out of the lake are trapped at the bottom, as much as 1,500 feet deep.

In 1986, Lake Nyos — a similar but smaller lake 1,400 miles away in Cameroon — suddenly released its gas reservoir, possibly because of a landslide. The lake eruption caused a 300-foot geyser of water and foam, and the resulting gas cloud asphyxiated almost 1,800 people nearby.

Researchers are concerned that Lake Kivu’s peculiar layering, volcanic activity, and trapped methane and CO2 could cause a similar catastrophe in the future. Gasses coming from the lake could suffocate people in the lake basin.

“Kivu has the potential for a major, catastrophic limnic eruption where many cubic miles of gas would be released,” limnologist Sergei Katsev of the University of Minnesota Duluth told Knowable Magazine.

Drawing Power from an Explosive Lake

Rwanda has a plan to curtail this potential environmental disaster by tapping into the deep reservoir of gasses in the lake, exploiting the methane gas for cooking.

The government has been working on a $400 million project with Gasmeth Energy to convert methane gas from Lake Kivu into compressed natural gas for heating, industrial use, and automobiles. Switching to natural gas and electric power can alleviate health problems, especially respiratory diseases, which are aggravated by air pollution caused by burning wood, reports Rwanda’s New Times.

Air quality in Rwanda is considered unsafe, according to the World Health Organization’s guidelines, and indoor air pollution, like that created by wood stoves, is especially dangerous. Air pollution accounts for more than eight percent of deaths in Rwanda, and it is the second leading cause of premature death.

Not only could this new source of power help reduce air pollution, it could also conserve forests, which are removed for wood fuel, and reduce the danger of a lake eruption.

The project started in 2019 and is on track to be finished by the end of 2022. Engineers say Shema Power Lake Kivu (SPLK) will generate 15 megawatts of electricity by extracting gas from Lake Kivu by June this year.

“This is one of the projects that will significantly increase power generation,” Laurent Butera, Branch Manager of REG in Rubavu District, told Rwanda’s New Times. 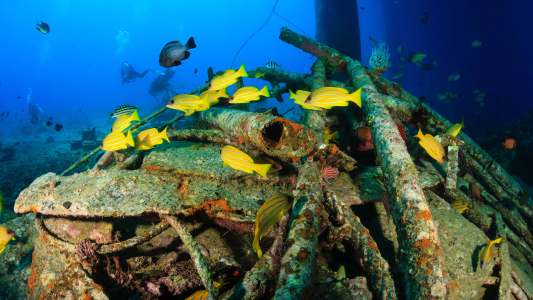 Marine scientists are advocating for abandoned oil rigs to be preserved as artificial reefs to save endangered species.