A green hydrogen rush is underway as governments around the world look for alternative energy sources to help cut CO2 emissions. Several large-scale hydrogen projects were announced last year and are currently under development.

What is Green Hydrogen

While hydrogen is the most abundant element in the universe, there is no pure natural supply of it — the element has to be extracted from other compounds.

That takes energy, so hydrogen gets referred to as a variety of colors depending on the power source used to extract it.

Consequently, hydrogen production is responsible for 830 million tons of carbon dioxide emissions per year (as much as the U.K. and Indonesia CO2 emissions combined).

So, for instance, even though hydrogen fuel cell cars emit no CO2 while running, the carbon released to make the hydrogen means that their emissions are only about 30% lower than gasoline cars.

But we can also extract hydrogen from water molecules using an electric current to break apart the hydrogen atoms from the oxygen. This process is called electrolysis.

If companies use carbon-free energy sources to power the current — like nuclear, solar, or wind — the hydrogen gas is considered “green.”

That gas is usually stored in a tank before it gets funneled into a fuel cell, which then converts it to electricity. (A fuel cell could be thought of like a battery because it produces electricity without combustion or emissions).

This can then be used to power cars, airplanes, or even rockets, or used to create electricity. But currently, most pure hydrogen is used to make fertilizer or refine petroleum.

Green hydrogen doesn’t emit greenhouse gases, and, unlike solar or wind energy, it can be stored and used as a power source all the time, even at night or on a calm, still day.

The cost of producing green hydrogen will need to fall by over 50% by 2030.

The catch with green hydrogen has always been the cost. It’s expensive to produce, so it would only make economic sense to produce it on a large scale. Right now, there’s not a big enough market to entice investors to take that risk — creating a global marketplace for green hydrogen would require a ton of the energy infrastructure around the world to be revamped in order to use it.

Large-scale ventures are a big step toward testing whether we can create a marketplace for green hydrogen in a way that makes economic sense.

Critics still joke that green hydrogen has always been — and will always be — the energy of the future. “The ‘hydrogen economy’ will never happen,”  Kerrisdale Capital, a New York-based investment firm wrote in a research note, according to the Wall Street Journal.

“Hydrogen energy will have only very niche use cases.”

However, a growing number of experts seem to think that the hydrogen hype is real.

S&P Global estimates that the cost of producing green hydrogen will need to fall by over 50% by 2030 to make hydrogen a practical alternative energy source.

This could be possible if the price of renewable energy continues to drop at a drastic pace because renewable power accounts for around 60% of the cost to make green hydrogen. However, we’ll also need to reduce the cost of electrolysis technology.

This is already starting to happen.

“We actually see a complete dive down of hydrogen production cost,” Haim Israel, global strategist and head of thematic investing at Bank of America told CNBC. He adds that he’s seen both electrolyzer and renewable energy prices decrease by about 50%.

“We believe both of them will go down another 60 to 70% before the end of the decade,” he said.

A World Powered by Hydrogen

Hydrogen could go a long way to solving renewable energy’s intermittency problem. Both solar and wind depend on the weather to generate energy, therefore at times they generate either too much or not enough. When there’s a surplus, using that energy to create hydrogen could smooth out the production cycle — the hydrogen could then be stored and used on days and times when there’s a shortfall of energy from wind and solar.

It could also help solve some of the problems with relying on batteries. Batteries don’t do well for some industries — like heavy manufacturing or trucking and cargo ships — because they’re heavy and take up a lot of space. Green hydrogen could help in making these industries more environmentally friendly.

There’s still a long way to go, but if any of these large-scale hydrogen plants succeed we could be seeing the start of a hydrogen energy revolution. 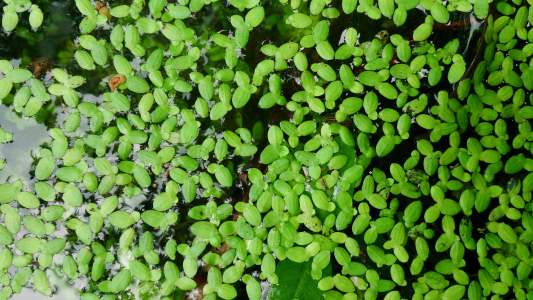 Scientists have uncovered the genetic underpinnings of the duckweed, the fastest growing plant, and it could help optimize future crops.