Every now and then, revolutionary technology seems to spontaneously appear out of thin air and change our world. Dynamite, penicillin, X-ray machines, and even microwaves are all examples of such revolutionary accidental discoveries.

Well, this year we may have had yet another. However, this time it is set not only to revolutionise the way we live, but potentially save our planet from looming climate change by unlocking an elusive technology: lithium-sulfur batteries.

For decades, we have been searching for the best technology to power our modern lifestyle and enable clean technology, like electric cars. Since the early ‘90s, the battery technology of choice has been lithium-ion.

It powers everything from phones and Teslas to energy grid backup facilities and even satellites. But despite the fact they have brought us into the 21st century, they have some severe downsides.

First, the materials that are needed to build them, like cobalt, are typically very environmentally damaging to mine. They destroy vast ecosystems and even leach out toxic chemicals. (In practice, there is also a humanitarian question, as some of these mines’ working conditions are deadly and use child labour.)

Then there is the lifecycle problem. We demand quicker charge times from our devices. This goes for everything from phones to cars. But, as anyone with a smartphone will tell you, lithium-ion batteries can quickly lose capacity if you repeatedly charge them quickly.

Battery degradation is a serious worry, particularly for the EV world. Secondhand EVs can sometimes be useless if the battery is spent, which will cost a small fortune to replace. Overall, this is slowing down EV adoption and also means that electronic waste, which is already a considerable problem, will only worsen.

There is also a density problem. Lithium-ion packs are relatively energy-dense, but they are still quite heavy, large, and bulky. This limits electric cars’ range because the batteries are so heavy, and it makes the batteries unfeasible for some applications, like commercial electric planes and ships.

There is even a fire problem with lithium-ion batteries, as a damaged cell can spontaneously catch on fire and burn intensely. Just look at what happened with some of Samsung’s old phones (Note 7) and the Rimac EV that Richard Hammond crashed.

This is why scientists at Drexel were looking into a brand new type of battery, known as lithium-sulfur.

On the surface, lithium-sulfur seems to solve all of lithium-ion’s problems. It uses far less ecologically harmful materials, can be cheaper to produce, can be up to three times more energy-dense (meaning a lighter battery) and is far less likely to catch fire. All without compromising charge speeds.

So, what’s the catch? Why don’t we already have them?

Well, they have one huge problem. While a lithium-ion battery can be useable for around 2000 charge cycles, lithium-sulfur is typically limited to around only half that. So, after a year or two of proper use, a lithium-sulfur battery is basically dead.

Lithium-sulfur batteries can be cheaper to produce and up to three times more energy-dense than lithium-ion batteries.

To solve this, the Drexel team was trying new approaches to lithium-sulfur, by changing compounds in the battery’s cathode.

Their goal was to slow down the chemical reaction that creates polysulfides when the battery charges and discharges. These crystals effectively take sulfur out of the electrode and ultimately cause a massive loss of capacity. Slowing them down could make these very energy-dense batteries last longer.

But what they found instead was something incredible: a chemical phase of sulfur that basically stops battery degradation! They were so shocked by this discovery that they had to check 100 times to ensure they weren’t misreading it.

This chemical phase is known as monoclinic gamma-phase sulfur but had only ever been observed in the lab at high temperatures — upwards of 95°C (203°F). This is the first time it has been seen at room temperature.

In the battery, this phase completely stops the reaction that creates polysulfides. This was so effective that the scientists sent the battery through 4,000 charge cycles without a drop in capacity, meaning it lasts at least twice as long as lithium-ion.

It is also worth noting that their battery was three times as energy-dense as lithium-ion and could charge just as fast!

To say this is a remarkable discovery is a massive understatement. But this new phase of sulfur also has other benefits, like reducing battery expansion and increased safety margins. In other words, this battery has all of the hallmarks of the ultimate mass-market battery, and these scientists found it purely by accident.

As with most accidental discoveries, the scientists haven’t yet figured out what is actually happening. They still don’t know why this phase of sulfur is created or how to ensure it stays that way. So further research is needed to answer these questions in order to develop a reliable battery that can be used in billions of computers, electric cars, and the like.

But it will be worth the wait as these batteries will weigh a third of the equivalent lithium-ion batteries and have twice their lifespan!

Short-haul flights, cargo vessels, and passenger ferries will have a technology that will allow them to go fully electric.

That means much faster, more efficient EVs with ranges of thousands miles will be commercially viable at a similar cost to today’s EVs. What’s more, they would actually still be useful in 10 years time, dramatically reducing waste and increasing the rate of EV adoption.

Furthermore, short-haul flights, cargo vessels, and passenger ferries will have a technology that will allow them to go fully electric. The weight-saving, long life, and competitive price will mean these sectors can finally achieve their low-carbon goals.

Incredibly, it gets even better.

Lithium, sulfur, and other materials that make this new battery are abundant all over the Earth. This means we can drastically minimise mining’s ecological impact, as well as ensure a stronger supply chain.

But that isn’t the end of this discovery. The team at Drexel are already looking into using this breakthrough to make sodium-sulfur batteries. By removing the need for lithium, they can make batteries even more eco-friendly and eliminate a massive supply chain bottleneck, ensuring EV adoption can continue at the breakneck speeds carmakers are planning for.

This accidental discovery at Drexel is set to revolutionise the world’s power usage and help humanity transition toward a cleaner, carbon-neutral society. Let’s just hope the team at Drexel can get this technology out of the lab and into our hands soon. 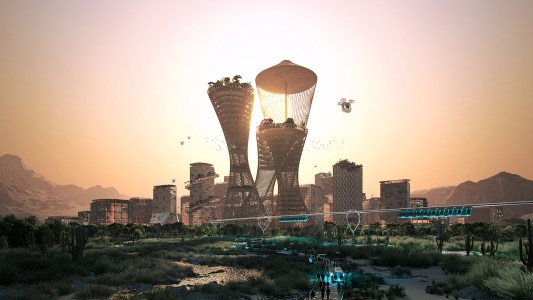 American towns and cities are no longer able to adapt to new residents. Is building new cities really the solution to this problem?

Urban Living
Why Starting New Cities Isn’t a Quick Fix for the Housing Crisis
By Toby Muresianu
Subscribe to Freethink for more great stories
Subscription Center
Sections
Video
Freethink
Subscribe
We focus on solutions: the smartest people, the biggest ideas, and the most ground breaking technology shaping our future.
Subscribe